"Provided to indicate the place at which goods trains are to stop,
in accordance with regulations, for the purpose of applying or
releasing brakes.

During darkness, the indication is given by an illuminated "B" in
the centre of the disc."

So began a note in a Christmas present from a fellow Rambler, Gary
Laker.

A description of the construction on the enclosed Uneek model
Brakes Landmark was included along with the words:

"Built in appreciation of your passion and commitment to the
greatest hobby of all and your help and friendship along the way."

Well, I was blown away.

I think this shows the friendship that this hobby generates and it
caused me to think of a few other gifts over the years.

The first from James McInerney many years ago was the Cox's Gap
signal box, the goods loading bank and station platform at Wollar.

This was followed by a Central Valley girder bridge built along
NSWGR lines from Ian Dunn, which currently crosses the river at
Kerrabee.

And finally a trestle bridge from Ron Cunningham that is on the
grade from Bylong to Cox's Gap Loop.

Down the years I have received the assistance of the other Ramblers
when I have called for help with some aspect of the layout. They
even helped me move the layout and contents of the layout room to a
new purpose built garage many years ago.


I think Gary says it well, it truly is a great hobby and it is a hobby that engenders long term friendships. 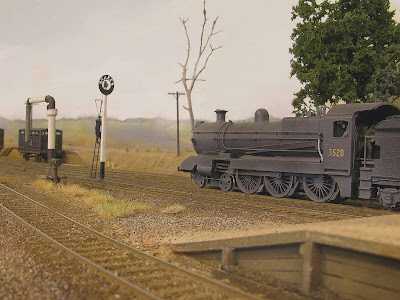 The Brakes Landmark in place at the Wollar loop at the top of the 1 in 40 grade to Bylong.