At the instigation of Dr Iain Stuart this post is being composed in Windows Live Writer and to give a small update on directions at Bylong.

In my last post I posted a photo of the layout with the new branchline and scenery. The branchline makes it's way around the room until it arrives at the previous position of the upper staging yard (above the lower staging yard).

At this point it enters the terminus of Cassilis.

Cassilis of course didn’t have a railway line but that just gives me a free hand to design the station yard.

Here is the proposed station yard as it stands at the moment. 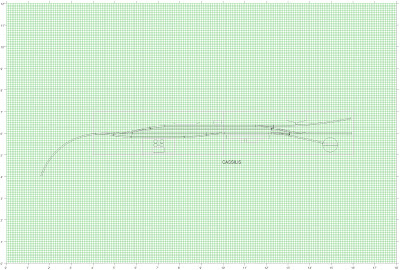 I hope to start work on the terminus sometime in the next couple of months.

Yes Keiran, that’s where your silo will be going, the one I have been promising to buy for a while now.

Postscript: Live Writer was very easy to use and the plan could be placed right where I wanted it, although you have to have a Google Picasa Web Album account as a requirement, not a great impost.
Posted by Ray P at 11:20 PM

glad you found live writer easy to use. I had a hell of a time posting images on blogger until I began to use it.

Is this the first plan of a bit of Bylong to be published?

This is the first bit since it was featured about 1980 or so when it was a small exhibition layout.

I don't really have a plan, this is a layout that has always been a work in progress.

It's also a bit hard to draw as it is a two level layout, sort of.

I might have to take a couple more panorama phots from different corners of the room so that people can work it out.

Ray, I like the track plan. . .If I flip it over and turn it 180 degrees, and shorten it by 3 feet it JUST MIGHT work as WeeWaa!

Ray, All looks good with your plan, although ave you considered the provision of an additional siding in loco?

Looking to the prototype examples of branchline termini (or other smaller locations along branchlines) there seems to have been an additional siding provided that would run about a coal stage eg. Merriwa, Canowindra, Eugowra, Dorrigo, Boorowa, Hillston, Lambing Flat.

This may add to operation of your branch by the running and placing (and picking up of empties) of coal wagons in this siding(S or K wagons etc) to load the coal stage. A railmotor could lay over here in this siding while the loco from the mixed is turned on the t/table and serviced? (thinkning photographic examples of Merriwa in this instance)

Having said all that I did find a couple of examples on the prototype that matches your current proposal of a single siding and ashpit with a turntable - Oberon and Taralga.

The beauty of standardisation on the NSWGR! Always a variation to a theme.

Understand that space may appear critical in your proposal, have you considered not running the tracks parallel to the layout edge, perhaps slightly skewing the station arrangement from the bottom left to the top right, it may provide a bit extra space at the bottom right corner for the inclusion of such a siding - Keiran Ryan's - Peak Hill layout i note does not have the running lines set parallel to the layout edge as an example.

Hope this may be of interest - I enjoy reading your blog.

Plans on my layout are just that, plans. The plan was just to see what could fit.

I was using the XtrkCad4 cad program for the first time when I did this 'plan' so parallel was simpler. Also I used the Peco points in the program but will be scratch building the real points as in Bylong.

The wheat silo and the cattle yard tend to control the angle of the tracks compared to the board edges. I may swing the tail end shunting neck towards the stock siding which would give me enough room to get an loco siding in. Probably also have to move the turntable further towards the end of the board. I really need to find a siding for a CPH or 400 to sit in overnight as there is no room at Wollar loco without using up one of the turntable tracks.

I will probably try to swing the station yard a small amount just to take the parallelism away.

I don't usually make the tracks parallel and this can be seen in the overall view of the Bylong yard in an earlier post.

I appreciate your comments and will certainly try to get a more flowing arrangement.

Looks good, except for one thing... ;o) Might I suggest that swapping the positions of the stock race and the silo would make for a more prototypical arrangement. After all, the Detail Police have been very quiet lately, but they are still around... ;o)

Also, Tom wrote: "Looking to the prototype examples of branchline termini (or other smaller locations along branchlines) there seems to have been an additional siding provided that would run about a coal stage eg. Merriwa, Canowindra, Eugowra, Dorrigo, Boorowa, Hillston, Lambing Flat."
Lambing Flat a prototype location... now *that* is scary!

It's all to do with the available space.

I need room for the turntable and have done another plan that has a coal stage track and the main line is now not parallel with the side of the layout.

I know that the more prototypical locations for the silo and stock yards are if they are swapped but I can't see how to achieve it.

Any ideas are very welcome.

Perhaps I should have prefaced my comments on including Lambing Flat as being a prototypical location with a "wink" ;-)

That is really helpful. It provided me a number of ideas and I'll be placing them on my web site eventually. I'm bookmarking your blog and I'll be back. Thanks again!