Well, I have been a bit quiet lately as I had been preparing for an operating night; now how long did it take?

I started about four weeks ago by wracking my brains about what went wrong last time. We always think we will remember or at least write down those little and not so little issues don’t we?

I remembered a point at the throat into Wollar that had sprung the straight rail during the recent summer but I had already ‘fixed’ that with track spikes and superglue (I hoped). So the next thought was to rolling stock some of which had been responsible for a few derailments. I should mention that my rolling stock is a mixture of the very old and the very new so a full review was in order.

After about $100 in metal wheels and new bogies I was reasonably confident that they would not embarrass me. I took the opportunity to replace the plastic 33” wheels in a number of goods bogies with 36” ones and also found some nice 2BR Andrews bogies made by AccuRail (0103) from The Model Railroad Craftsman at Blacktown NSW. Be aware though that I cleaned Gary out but he said he would be ordering some more, ring before going there if you want some. Also realise that they come with plastic 33” wheels that need to be replaced with 36” ones (I used Walthers 36” wheels as they have plastic axles and aren’t magnetic of course).

Here is a photo of the 2BR under an On Track LLV that I will be back dating to 1965, not much to do, just adding some hand rails on the ends really. 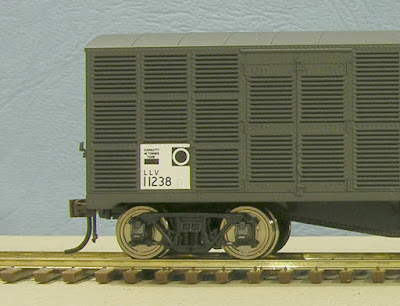 After the re-wheeling came locomotive and layout testing and I forgot, cleaning the ‘crud’ off the rolling stock wheels, a slow process.

Two days before the big night I thought it might be a good idea to put up a ‘fence’ on the aisle side of the upper staging yard as the outside track was right next to a big drop to the concrete. So a quick trip to Bunnings procured a length of cover strip with rounded edges which was nailed to the edge and painted black to match the rest of the staging yard. The top edge comes to the floor level of the rolling stock which I felt would stop any problems.

I also set up an old video monitor with a small (tiny) video camera which I temporarily mounted at the throat of the yard so that the shorter members of the Ramblers could see which track was empty etc.

Here are a few quick and dirty videos I took during the proceedings using my digital still camera, my HD video camera having a flat battery which was inconsiderate of it!

I will really have to try making some videos of the layout but it is not as easy as the still shots as you can’t remove the brick wall, garage doors, etc. in the background. Bob Stack has done some very nice ones on his South Coast Rail blog that I will use for inspiration.

The layout was run to a timetable that I have been slowly developing with an NCE DCC control system. Since the NCE radio throttles have had the issues with slow button presses, etc. solved I decided that this would be a full radio throttle night and with all sound locomotives. Now I only own two radio throttles but Marcus Ammann (6 throttles) and Ron Cunningham (2 throttles) came to the rescue. In case you get the wrong idea the layout only needs about six throttles at best it just shows how helpful friends can be. I also didn’t have enough sound equipped locomotives but that was much easier with several friends bringing along theirs to complement the roster.

James McInerney brought along a D50 equipped with a Tsunami suitably adjusted for drifting, with momentum and deep throated chuffs on starting and a 49 class with a LokSound decoder also set up with momentum. These two locomotives were quickly allocated to the two pickups, one Up and one DOWN, James taking the D50 and Terry Flynn the 49, very interesting to shunt with.

Well the night went reasonably well, we did manage to finish without too many errors, only one train missed its time slot but it was the branch mixed and they always ran late. I did notice though that there was an extra light engine movement back down the grade to bank the next goods train that required it (none) and an empty express meat back to the country that wasn’t timetabled!

Regarding the layout, I only saw one derailment and the offending wagons are being checked, I suspect a too tight bogie. There may have been others but I will ask for a post mortem at our next meeting.

The best part was standing back interpreting the timetable and watching my friends enjoy themselves, all in all a great night which finished a bit before 1am.
Posted by Ray P at 10:37 PM

Point of order, Mr Speaker! It wasn't a C32, it was 5262, one of North British's finest! I know the P and T class are similar, but not *that* similar! ;o) It was very interesting operating a locomotive that has such a high level of inertia on the pickup. One had to be *very* careful not to get up to too high a speed during shunting, otherwise the locomotive would be out of control and could not be stopped in time and then *crash*! It had the effect of slowing everything down so that shunting took about the right (fast) time. Made for a very interesting (and realistic), if somewhat tense, experience at times! Also, with the 49 class, which doesn't have the same level of inertia as the 50 class, the ability to run too fast during shunting really shows up in the 'ground level' videos! The combination of sound and inertia (plus the inherent smoother running with DCC) definitely makes for a much more realistic driving experiaence, at least in my opinion. Thansk for a great night, can't wait till the next one! (Might even have a *real* P class ready by then ;o)

Glad you enjoyed the night.

I almost chastised Terry on the blog for the speed of the shunting but then I have seen the Darling Harbour shunting videos on the Taree and District Model Railway club blog. The OH&S guys these days would freak.

Ray, like the vid clips. Guess Maybe I should have slowed Terry in Bylong as I had some control there. Also a shame about my sqeeky voice on you vid clip.
Was a great night.

Ray, I loved that during the footage you can hear all the blokes having a great time in the background, just as a running session should be. The footage shows off the sights and sounds you've created very well. Great to see!

do you simply work to a time table or do you have some sort of card system as well?

Timetable for the trains and an X2010 Train Consist Form (modified copy of NSWGR form used to record what wagons were on a train). The X2010 has the consist for each pick up goods and the branch mixed with instructions as to what to pick up and set out at each station. The other trains are made up to suit the trains on the timetable but two are extra long and have locos allocated to them that can't pull them up the 1 in 40 grades so these are banked from the rear. This is is very interesting, especially through the Bylong No.2 tunnel (8' long and track on a 4" wide roadbed 40" from the concrete floor).

Evening Ray,great work. I have seen your work in plenty of photos but it was good to see the vids to put it all into perspective. In the first vid there are a few standing around, my question how wide are the aisle. You say that around six throttles is all that is needed, how do extras affect the operation. I am constructing my frame work and have the plan done but am a little unsure if 900mm will be to narrow. Again great work, I look forward to the next session. Darren

The narrowest places are about 600mm, one leads to a very quiet spot not normally needed when running and the other is at the end of the Muswellbrook staging yard which is 600mm to the area between Bylong and the tunnel but it is only 600mm wide.

The other spots are about 1000mm and the very wide area where most are standing is probably about 1800mm. Of course someone always stand in a pinch point don't they?

We had about 12 in the room and it was abit tight to move around.