For decades (since the 1980's) I have been interested in the possibilities of some sort of computer based control of my trains. With the advent of DCC this has moved much closer in recent years.
My idea is to be able to drive a pickup goods while the computer sends trains along the main line from staging yard to staging yard. This of course is just for me to operate alone. Now, that is not to say that I want to always operate alone but it is more the challenge of doing it in the first place.
I am one of those people who like to try things out and am quite happy to build say one BWH wheat hopper but don't ask me to make the rest of the kits I have stashed away (thankyou Trainorama for rescuing me from that dilema).
A couple of weeks ago I found some SMD (Surface Mount Device) 5.1K ohm 1/8 watt resistors at the Model Railroad Craftsman at Blackown NSW. The brand was Ngineering and there were 20 for $2.50 in the pack. I bought the only two packs that Gary had and then the fun began.
What are the resistors for? They are used across wheels in a wagon to trigger a track detector (NCE BD20) so that a computer or other circuit can know that a train is in a block (or section).
Since Bylong is set in 1965 the wagon of choice is the guards van or passenger brake van, the locomotive is already capable of being detected due to the resistance of the motor, DCC dceoder or other circuitry.
If I was modelling the later no guards van period then I would have to consider adding a resistor to at least two axles on every wagon.
The idea is to connect the resistor between the two metal wheels on an axle. My first attempt at using the resistors involved coating the metal axle with super glue as the resistors have solderable contacts at each end but also on the top and bottom so insulation from the axle is the first priority.
Next the resistor is picked up with fine pointed tweezers and super glued to the now hardened glue. The last step is to use some solver conductive paint to make a connection from each metal wheel to each end of the resistor. I used a pointed toothpick to apply the paint and as can be seen from the picture below I ran the paint up the spokes to the rim to ensure good contact. I will of course spray paint the axles later. 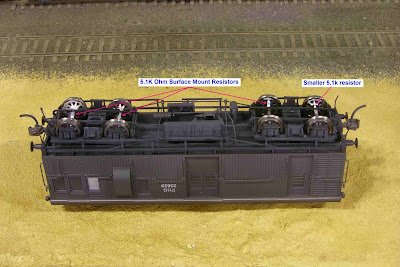 Here is a photo of a Trainorama PHG with a couple of different ways to mount the resistors, on the left are the axles with the coating of super glue while on the right are two different size resistors mounted at an angle from the axle to the insulated bush on the other wheel, this is the easiest method but you need to watch out for the runny paint (see below). The small resistor comes from an alternate source but is extremely fiddly. The source was Altronics, an electronics supplier who had them in different sizes at 10 for 85c or $21 for a reel of 5000, I bought the reel figuring that some of the other Ramblers will want to do the same.
I checked each wheel set with a meter set to resistance. Easy enough? Not as simple as I found out. I kept ending up with short circuits as the silver paint ran around the resistor by capillary action and joined the other end (yes they are that small). Or, as I found out, the solvent in the silver paint was strong enough to eat into the super glue and get enough silver paint through to the axle. Now, the reason for this I think was that I was impatient and if the glue had been allowed to go off for say 24 hours then it probably would have been OK.
Why not use water based glue or paint so that this doesn't happen? Easy, water based glues and acrylic paints are of course going to be conductive until they are very dry, yes, I tried it also, same result, a short circuit.
Is it all too hard? No, I soon got the technique sorted and the success rate climbed but you can usually save the situation if it does happen by scraping away the silver paint and trying again.
I ran a series of tests on the layout while I was doing this, I tried one axle, no go, intermitent, two axles, yes if the wheels were spotless but intermittent even if not too dirty, so four axles which worked well.
The easiest axles to do were some Walthers Proto 2000 36" wheel sets that have plastic axles, dead simple.
Well, I have done 9 guards vans so far and have 18 guard vans and brake vans to do in total so I am going to have to get over my resistance to just completing one thing before moving on to something else (I still haven't finished the hand built points for the Cassilis branch terminus yard).
For those who are interested, I am using JMRI and Panel Pro on my computer which is interfaced with my NCE DCC system. I can see trains in the Bylong yard and on the main to either end and I also have a signal acting as a starter for the top staging yard that indicates if a train is in the block outside of the yard as it is about 24' long, that's all for the moment though.
Don't wait for the next installment it could be a while.
Posted by Ray P at 10:53 PM

Perhaps "Resistance is futile !" may have more appropriate ;-) Whatever way you look at you will have to 'resist' the urge to 'branch' off to other projects for a while(sorry!)
I think that works out to 76 resistors looking for somewhere to hang out ?
I share your pain Ray, I've nearly gone through my first box of 500 tek screws fixing gyprock battens to the inside of the cave...I'm about 1/3 done >:( I actually got to do a few hours today and saw some progress, now paying the price..oh the pain !

Hmmm, I think I will stick with the resistors.

The way that the shed is starting to move again, you'll be looking for some resistors soon then?