Tarping an S Wagon - Not a One Hour Project

As a result of Colin Hussey leaving a comment on my last post with the size of a NSWGR tarpaulin (24' x 16') I decided to have a go at tarping a S wagon. A search led me to the following three photos from the Weston Langford collection. Note the brand new tarp on the S wagon and the stencilling of NSWGR with 4 characters, the last two being 44. You can also see the end of a tarped K wagon in the lower left corner which only has the NSWGR so I don't know what the other 4 characters were for. 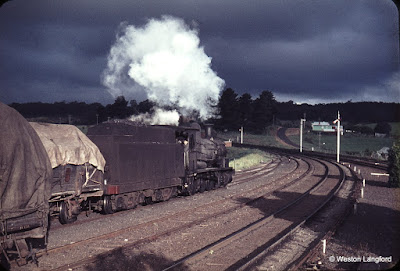 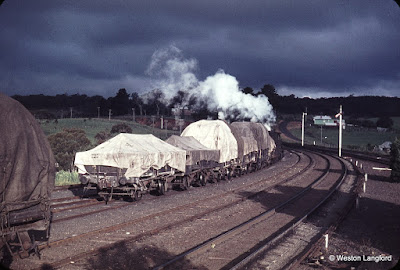 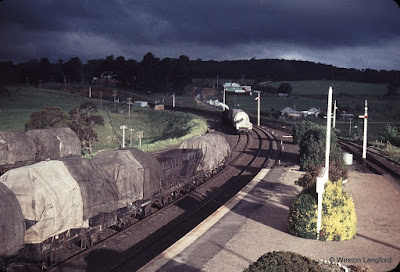 With the clean tarp picture I was able to estimate where the tie down points were on a tarp and as Colin pointed out in his follow up comments there are some about 4' in from the edge as well as around the perimeter. I drew up a tarp to HO and made a PDF file with three tarps (click on the link to download the PDF). I then then taped some white tissue paper to an A4 sheet of paper, crossed my fingers and printed three tarps on my laser printer. This worked well as can be seen in the following photo. 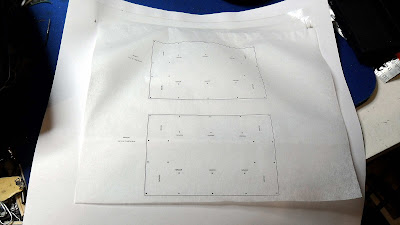 After cutting a tarp from the tissue paper I used a pin in a pin vise to put small holes at the black dots printed on the tarp. I then threaded some EZ Line through the holes and put a small drop of ACC (Super Glue) on the underside to hold the 'rope'. Twenty ropes later I was ready to give it all up!!! 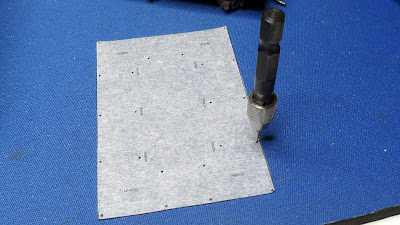 I then used a number 76 drill and drilled through the sides of the S wagon to the underneath of the floor . 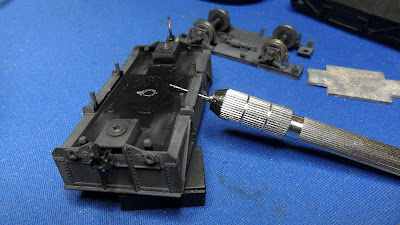 A piece of balsa wood was glued to the floor of the S wagon to replicate the load under the brand new tarp in the Weston Langford photo. The balsa was rounded slightly on the top edge. 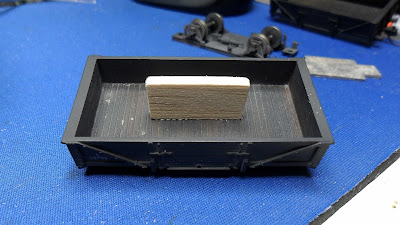 I missed a photo here, but the next step was to thread the 'ropes' on one side of the tarp through the bottom holes in the wagon until it was shorter than needed (so it could be stretched later) and glued it to the underside of the floor. I used accelerator for all glueing and I can't emphasise enough how this speeds construction. It is tricky to get two ropes through the same hole but it can be done, the second rope coming from the higher up tie downs. I continued slipping the ropes through the holes, pulling them tight then glueing them to the floor and folding the tarp around the ends of the wagon. This is hard to explain so if you give it a go you will have to work out the best way to do this. I think that each wagon type will have a different challenge. 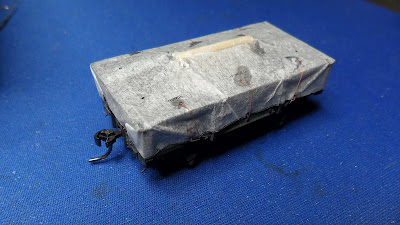 Once the ropes were all attached with the tarp folded around the S wagon I carefully coated the tissue with watered down PVA and allowed it to harden. 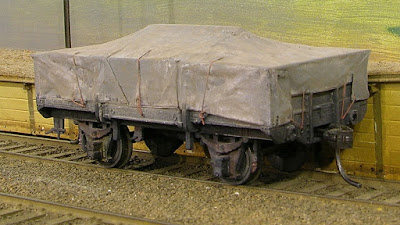 The last step was to carefully paint the tarp without painting over the NSWGR stencils. I used a light grey and followed it with powdered pastel colours. I am not too happy about the result but it is the first time I have tried to replicate the colour of a tarp. 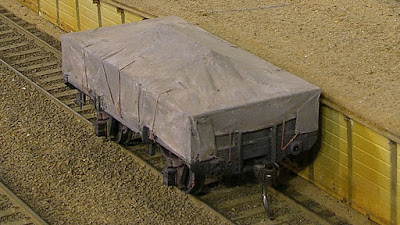 If you look carefully at the top view of the S wagon you will just see the NSWGR stencils.

It appears that I am in trouble with the detail police as James McInerney sent an email saying that I had the timber in the wagons pointing the wrong way for the direction of travel (see the video in the last post). It seems that the single central stack should be pointed towards the locomotive to lessen the chance that either of the two outer stacks would strike something, makes sense to me, thanks James.

Here is a photo from Colin Hussey showing timber carried this way. 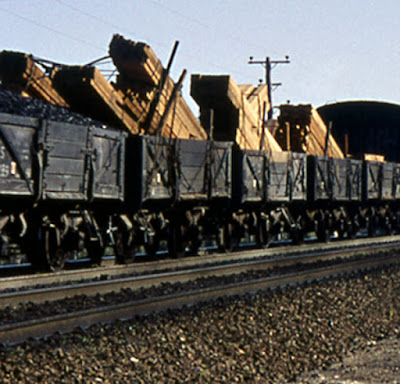 I think the Tarps look great Ray, maybe a bit of grey/black weathering might help the colour.

What sort of tissue paper did you use? I'm wondering if you had any problems with tearing?

A good job & like so many things in the hobby its very much like a mad scientist with his bottles of water & associated stuff sitting atop a bunsen burner in experiments, & that is getting the tarp colour "right" but given the degrees of colours they ended up with.

The numbers on the tarps I would suggest a nothing more than batch numbers that were stencilled in at the factory for accounting purposses, & in accord with the actual batch supply quota, that way when there were any defects it was able to be determined if it was within a particular manufacturing batch/supply.

The particular wagon & tarp method you have done, is the type I mentioned to you for Superphospate, & that was a common product sent to Newbridge where the photo was taken.

I'm holding off until just before Auscision announces their RTR S-trucks with 12 different variations of tarp shapes and loads before beginning my tarping journey.

Neale
The tissue paper was what you can buy in the newsagents for wrapping presents, etc.
Yes I did have some tearing at the end of the balsa support, if you look carefully you can see where I glued it back together.

Colin
Yes, that colour thing is the hardest of all, so many tarp colour variations and so many subtle colours on an individual tarp.
I thought it might be a superphosphate load after your emailed comments.
If they are batch numbers then perhaps it was a 'new' thing at the time since the K wagon doesn't seem to have them.

Blair
30-40 more! I agree, the thought went through my mind and in fact I told Chris that I was thinking of calling the blog post 'Get a Life'!
I second the desire for someone to do tarps commercially.
I don't think I can face doing another for a while. Try threading 20 pieces of the EZ Line through 20pin holes in tissue paper, neither of which have any stiffness and when you turn it over to glue the thread to the back of the tarp the thread falls out!!!!

The aspect of the threading the line is actually the area that I tend to wonder about, owing to the extreme or seemingly extreme amount of time that is taken to put it in place.

As mentioned I am looking at using some of the scribble pads for tarps, & will try the A4 sized ones, & run through the laser printer first. The reason is that its not too bright in the white colour so perhaps a bit easier to provide a different shade to the weathering.

My thought is on top of the PVA, water, & Cornice cement mix is to perhaps stick some fine cotton to the areas where the ropes go & then mold the whole tarp into shape along with the cotton in a rough but close position to where it would be tied to the wagon, if it works, great, if not well just the next experiment.

Anyway at the moment, I am into scratch building a T1a stock yard which is challengine & using wide paddle pop sticks & cutting them to size.

regarding the batch numbers it is only a thought, but I understand that the Tarp factory sourced different companies for the canvass material, & not all of it was as white as shown in the Langford photo's, from my memory they were more of an off white, tinged toward a light khaki colour.

Likewise the white offect could be a result of the tarps & wagons being captive the the super trade at that time. But its all guesswork really.

NSWGR tarps were bleached canvas and were slightly off-white when new, but soon weathered to a black/brown grimy colour. Weston's site has plenty of examples in various states of weathering. I usually start with Tamiya Flat White and get the weathered variations with various 'washes' and lightly airbrushed coats of my black/brown weathering mix and Tamiya Flat Earth, the amount put on depending on how old I want the tarps to look.

Looks great!!!!
What font did you use to put NSWGR on the tarp template???

I just used Arial because being so small the differences aren't noticable.

Hi Ray,
Having trouble downloading the file.Any chance you could email it to me please. iphemist@dodo.com.au.
Cheers
Ian