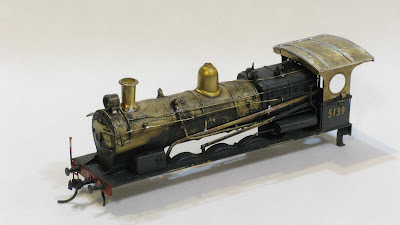 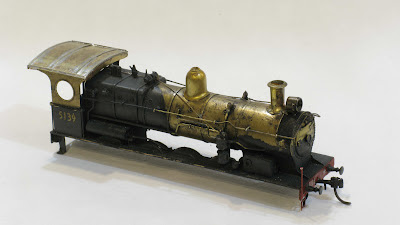 I added a Soundtraxx DRGW K37 Tsunami sound decoder and speaker in the tender like my other two 50s. The tender also had new marker lights fitted and the poor turret tender bogies that were originally fitted had been replaced with the correct ones some time ago. I do have a Lloyds Turret tender kit which I will make up some day to replace the original, or maybe I will use one of the Andian ones when they are released.
Extra pickups were added to the loco and the tender bogies as well as a wiper for the chuff using my method of ACC Super Glue applied to the rear wheel rim  of the last driving wheel to make insulated sections.
I have noticed now that it is painted that there is a circular hole in the cab side for access to the sanding gear, for filling I think, so more work to come.
One day I might try re-gearing both of the Bergs 50s to get rid of the worm gear by mounting a gearbox on the rear axle inside the firebox and then sliding the motor inside the boiler barrel but don't hold me to this.
Posted by Ray P at 11:00 PM

There was a sand box filling hole on each side of the cab, on actual loco's it was a seperate structure that also formed the main base for the cab seats, & kit storage area on the firemans side. They had access doors on the inside of the cab.

The box had an appr 45degre angle along the outside top, with a raised round lid (same as on the leading boxes) on the side for the hoses to go into.

Being slightly off the cab wall it meant water & sand overflil would go to the ground, for a model though a simple lid on a bracket would suffice soldered to inside of the hole.