Modification to the Weight of an SDS Models Rail Tank Car

During a recent operating session we had trouble with multiple derailments of an SDS tank car which was placed in the middle of No.81 Goods which was being banked from the rear. The driver of the bank loco has worked this train many times so was not the reason for the derailments. It got so bad that the offending tank car was removed from the consist. After the session I had a look at the tank car and felt that it didn't feel heavy enough. On checking, it was found to be 63 grams which under the weighting rule used on Bylong of 2 grams/scale foot over buffers or headstocks meant that it should have been about 90 grams. No wonder it was giving trouble. A survey of the other SDS Models tank cars I had produced the same 63 gram mass for each.

I decided that extra weight was required so I proceeded to find out how to get into the tank.

The process is simple enough and was carried out on an Esso tank car as follows: 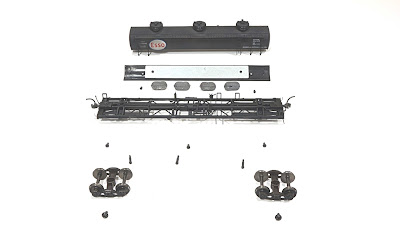 Exploded view including the fishing sinkers

I should mention that these SDS Models rail tank cars are the ones that are/were available as singles from the first manufacturer (considered unsatisfactory by SDS Models). The later three pack tank cars from SDS Models may not have this weight issue. If some one could weigh a tank car from a three pack and let me know the mass in grams that would be useful.
Posted by Ray P at 3:04 PM

Thanks for the information Ray, & I gather the problem exists only when the train is being banked in the rear?

I have a couple of the original NQR models from the 3 pack, so could weigh them for you if they are what you are after. I actually wondered myself whether or not they were heavy enough, as I had a couple derail but found it was with buffer lock when going through points into a loop.

I am wondering about how easy it is to remove the factory weight & replace it with lead flashing rather than the sinkers as you have done.

We found the problem when banking but I will be adding weight to all my SDS tank cars so that all wagons match in weight for length.
No need to replace the weight just glue some lead sinkers on the existing weight.
It would be interesting to know the weight of the tank cars in the 3 car set.

Hi Ray,
Looks like there has been a change from the fisrt production.
I weighed each car from Set 1950 A and each was consistent at 80g.
Although there may be other issues with your "offending" vehicle related to bogie pivot/ movement.
Happy shunting

Thanks for the information, very useful and also interesting.
I will investigate the bogies and bogie mounting on the SDS tank cars.

Just weighed an Atlantic wagon from the NGR pack & it came in at 83grams.

It looks like SDS corrected the issue with the later runs, no need to weigh another.

It does look like the Southern Rail Models tank cars are light though, but then 'light' is relative to each different modeller I guess.

The Atlantic wagon is part of the initial run that were not quite right thus the 83grams.

I weighed an SDS Purr Pull wagon from the latest run, from a single pack this evening & it came at 62grams.

When picking the two wagons up the weight difference is really quit noticeable, as I have 7 wagons in the original order, I will do a weight check on them to see if they are all in the 80 gram mark.