Recently I was at a layout with an approximately 1 in 40 ruling grade and I noticed a train with two NSWGR Standard Goods locomotives on a reasonable length train and as I knew the owner/driver I asked if he felt that this was a prototypical load. The answer was that he thought that it was within the tonnage limit for the two locos. Now some time ago I built a train load calculator spreadsheet for my Bylong layout which also has 1 in 40 ruling grades so after taking note of the wagon types and how many of each type were on the train I went home. That night I loaded the Excel spreadsheet with the intention of checking the tonnage for the train but decided that I could improve it and here is the result:

The result of my check of the load allowed for these two standard goods locos was that the train if fully loaded was actually about 90 ton over the limit for two standard goods locos on a 1 in 40 ruling grade (590 tons). Now the interesting thing is that the train looked OK, not too long at all. Of course it would depend on whether each wagon was loaded to capacity and I had assumed that each wagon in the train was fully loaded.

I have protected the workings of the spreadsheet so that various formulae do not get over written but there is no password so just click on Unprotect Sheet if you wish to change something, but you probably shouldn't have to.

The data entry areas are highlighted in two different greens representing initial set up data and operational (working) data, e.g. how many of which wagon type, which locomotive(s) are to be assigned, etc. Data entered on the Permissible Loads sheet automatically comes in when you enter numbers of wagons. Similarly the motive power drop down list for the train is linked to the locomotive types on the Permissible Load sheet. This brings in the maximum load for the motive power and the equivalent length in 4 wheel wagons.

When I set up the Permissable Loads table I generally added the single loads of two steam locomotives together when setting up the spreadsheet which is apparently not correct. I have been told that the maximum load for two steam locomotives was determined by adding the individual loads then reducing the load by about 10%. Note that from the Working Time Table, the loads for two diesels were simply doubled

The tonnage of the train can be adjusted for empty wagons, 25% full wagons, 50% full wagons, 75% full wagons, fully loaded or specific loads per wagon. Examination of a NSWGR Working Time Table will show that often the maximum number of wagons will be stated for both a 100% and a 75% loaded train.

As you can now see, the length of your train is dependent on the percentage load carried for the ruling grade of your layout as well as the number of wagons in the train as this may conflict with the minimum and maximum staging tracks or passing loops.

I have decided that since the NSWGR had information in the Working Time Table for 75% loads then it would seem likely that the target loading for a train was somewhere between 75 and 100% loading. If this is the case then this really helps our portrayal of prototypical operation on our layouts as it restricts the length of our trains to something that our model steam trains can actually haul.

Incidentally, if I used the 75% loaded column for the wagons on the double standard goods train then the load at 565 tons was 25 tons under the allowed maximum load of 590 tons.

I have always used 2 grams per HO foot measured over headstocks as my target for wagon weighting with a little modification for passenger cars. This system allows prototypical length trains to be hauled by our model steam trains sometimes with a little additional weight, but often without. Here is a spreadsheet that can be used to determine the mass of your HO wagons with a +/- 15% range.

I should state here that when I set up a train on Bylong which will be banked from the rear it contains wagons that are sufficiently heavy to cause the train locomotive to be unable to haul it up the grades on the layout so that the banking locomotive is truly there to do its job. So, some of these wagons are over the upper limit of the weighting system but for a reason.

As an example of a typical fully loaded train here is a photo of a train headed by a D57 class that just fits into the loop at Bylong yard, not that long is it? 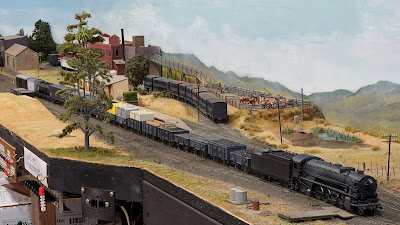 There you are then, a little something to think about and a useful tool if you decide to work to more prototypical length trains.
Posted by Ray P at 11:28 PM

Ray. The primary & best place to look for loads is in the Working Time Tables, these came out more frequently, showing changes to loads, & train working conditions, much more reliable & easier to keep updated.
Updated loads & conditions also came out in depot affected weekly General orders as well as the State wide Weekly notices.
The load of a double header while slightly less than that of 2 combined single engines, depended more on the added length of the train rather than the actual load itself, which took the amount of curves & train drag into account. Another point was that it was quite possible by adding an extra wagon to the load, the train was then overloaded.
The WTT gave loads, for individual sections over the length of the whole line, with general ruling grade made that making up the through load. Also found was the length limits for single & doubles, another consideration was the length of crossing loops.
Another aspect was momentum grades that allowed for more than the standard load to be taken. Heavier loads were taken from Hornsby - Broadmeadow than from Enfield to Hornsby Eg: & IIRC, a freighter was allowed 360tons Enfield - Hornsby but 390 from Hornsby. Tumulla, Molong – Oge & Ardglen had the same loads as those from Enfield – Hornsby.
The 75% load was maximum & no more of the full through load used for accelerated running of old fruit expresses when the train consisted of 4 wheelers, it was primarily meant for faster grade climbs hill grade in order to keep the speed up.
The best example found on the west from Lithgow to Orange, with the influx of 36cl to the area & removal of the freighters almost all through trains were listed in the WTT's as 75% loads.
The reason was to simplify/standardise rostering of engines, set loads were compiled that allowed for single running times for the goods trains, with all running to 36cl running times & loads. For freighters they worked up the grades at the same speed as a pig.
The benefit of this arrangement beyond Lithgow was that when a steam service was programmed for any load single or double header all the trains needed to be made up based only on that load & not of the engine type as it did not matter whether it was a freighter or pig or combo of the two. In these cases, the Pig led owing to operational reasons, when doubled with a freighter.
Rear end banking was not permited on passenger trains, some noteable exceptions, but not on mixed trains, empty 4 wheel stock wagons, which had to be located at the rear.
When working double headers, I would not say there was anything to do with drivers ineficiences or crews at all, & really is a put down of the men who labored on the engines.
Every time crews worked a double header there was always a confab between the drivers regarding the trip ahead, rarely did it mean any adjustments to the standard drivers way to drive the engine & train. If either crew needed to communicate it was done with the whistle to attract attention of the other, usually meant to slow down or crack the whip, these were known hand signals that could be seen from cab to cab. Smooth working of the train did not depend on the aspect of single or double heading but on the train composition. We felt it just as much up front as did the guard if the train had been made up badly.
When composing trains, I have worked more on the length based NSWGR form of an S truck is a single wagon, while every other wagon is listed compared to it, Eg: K is 1.2, BWH & early bogie vehicles are 2. Initially I worked on having a load of around 30 S trucks & van, with loops around 2.4 metres, but a train that long looked far too long. I changed the loops bringing back to 2mtrs in clearance which looks quite ok. This allows for train lengths of around 23 S trucks & single loco, without problems.
In modelling the adage of less is more, really comes true & your 57cl load shows that up well.

Many thanks for making both spreadsheets available. Both were downloaded without difficulty.

The load calculator in particular is going to mean a rethink of long standing operations.