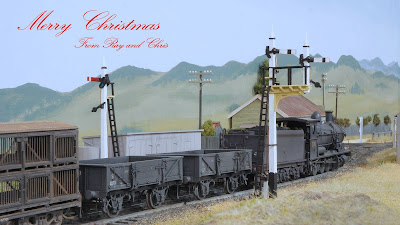 G'day Ray,
Hope your Christmas/New Year went well mate, I have viewed this post when released but obviously had to come back for a re-read and I gotta tell ya the last three photos posted, the background photos are incredible(Im not forgetting all the great work you have put into the signals, also incredible) but to me the backdrops appear to be the icing on the cake for the final shots !!! Good stuff keep it coming.. I find myself totally immersed at times, with certain projects that I feel are not working out to my satisfaction are placed in box or on shelf for a couple weeks and I move on to something else, whilst still stewing on the previous one, this gives me that cooling down period I need, and you wouldn't believe it I rediscover clarity !! (now why didn't I do it like that the first go round Ha..)Now I don't need to state the obvious (already have) as modellers we all arrive at this point, but that is what I love so much about this hobby, new discoveries, newly acquired skills, finished projects(yeah right)theres always an aspect that's keeps me burning for more(lol) Currently installing benchwork shelf style 12ft at moment but plan to go around the room, only small room 9x16 but desperately need some locos up and running, constantly looking at workbench and 3ft of test track "I've had enough lets slap up some benchwork" so that's in the works currently, also looking into custom sound files for a newly acquired X-class, resin casting also on the go, towed around bgb kits for years and you know the story the bag opens with a poof of dust, some really had been thrashed, enough so, my only option was to salvage what I could and cast remaining parts, I will say with great results this was a lot of fun. Anyway Ray that's where I am up to, hope you and family are well.
Kind Regards,
Matt.