For a little while now I have been back into working on my signals for the layout. When I started my Signals Branch shop on Shapeways and produced the line of signals in White Strong and Flexible (WSF) nylon material I worked out what I thought I needed and ordered all the signals. So of course when I later worked out how to have fine detailed signals in the more expensive Frosted Ultra Detail (FUD) acrylic material and to make them only a little more expensive than the WSF ones I already had all my signals. Bummer!

Knowing that I couldn't afford to replace the WSF signals with fine detail FUD ones (or my later brass ones for that matter),  my thoughts turned to cutting away the printed handrails that were too thick due to the WSF minimum design limits for 'wires' in the 3D printing process and replacing them with actual 0.015 inch phosphor bronze wire.

As a result  I had been trying to come up with a jig for bending wire safety handrails for the left and right hand bracket signals and the single post signals for some time and had designed and had printed a trial version, but I wasn't happy with it. This was well over a year ago.

A couple of weeks ago my wife Chris brought home an Aldi weekly flyer and I noticed that they were going to have a small 3D filament style printer for sale on the coming Saturday for $299. I investigated the printer on-line and found that it was a re-badged version of an existing small printer (a Wanhao i3 Mini 3D printer), so after watching a couple of YouTube videos of the other printer I was there at opening time on the Saturday and came home with the printer and three 1 kg rolls of the PLA filament in white, grey and black at $34.95 a roll. Note that this printer only uses PLA plastic filament, no ABS plastic with this printer.

The Aldi printer is called a Cocoon Create and is actually from a company in Melbourne, here is the link.

A few months ago Aldi had a larger filament printer with a heated bed ($499) and probably better than this one but I thought that this was all I needed for what I had in mind.

The printer didn't need to be assembled and set up was minimal but the included small manual must be read. In a short while I had the printer working away on a small cute dragon to test it. About 7 hours later it finally finished the dragon. The result was reasonable but it was obvious that this printer wasn't going to be making any fine detail signals but then I knew that.

My purpose for the printer was to do trial prints of designs to make sure that they would be OK before I placed them on my shop. Now as it can't do everything I will concentrate on useful items that it can do.

I then spent about half a day working on re-designing and printing versions of the signal safety handrail jig and after three versions I had it sorted. Now it might be said that $400 is too much to make a signal safety handrail jig but apart from saving the Shapeways printing cost I had also saved time as the three jigs would have taken about three weeks each between print test, redesign and re-order and this is very important to me.


Once the jig worked I uploaded the design to my Signals Branch shop. The jig can be used for the WSF signals by cutting the printed ones off and drilling holes at the cut locations with a 0.45mm drill bit in a pin vise. It can also be used to bend up the safety handrails for the Fine Detail FUD LQ Signals and the Timber LQ Brass Signals available from my shop.

Over the last two weeks I have also printed off a few different items to explore the limits of the printer and it does have limits. Basically a design is best to have a flat base as the printer only uses PLA plastic filament that is heated and extruded onto a unheated plate and the first layer must stick. If the base layer is too small the print will move and you will get a mess.The supplied software that produces the gcode for the printer has an option called a Brim which is like the brim on a hat, that is it will be add around the base of the model to assist in bonding to the printer base plate. There is also an option for a Raft that can be used for items that don't have a flat base and this is a support under the whole of the item.

Here are  some servo motor brackets that I usually get from my Signals Branch shop.

One thing that must be said is that the printer is slow, slow, slow.......

Anyway, for those who are interested, I saw last Saturday that my local Aldi still had some printers and a small number of PLA rolls of filament. Be aware though that these basic printers aren't the type that are just press the button and go as some adjusting is required to produce a useful print, e.g. the printer base plate must be leveled for each print and attention needs to be paid to the printing temperature, Brim, Raft or None, etc. I was very aware of what I would have to do to get good prints as I have been watching the development of various types of 3D printers for many years.

So, back to the signals on the layout. I can make and add handrails, add one of my FUD signal ladders (available in 2 or 10 to a sprue) and add the wire ladder supports to a WSF signal in about 45 minutes now and I have done most of them with only about 8 more signals to add handrails to.

While the end result is not up to the standard of the fine detail or brass signals they still look quite good and are an easy upgrade.

Here are two photos of the partially completed signals in my Bylong station yard. The signals are yet to have the operating wires attached, be mounted and have the servo motors installed. The last thing I do with a signal is to glue the finial (NSWGR term is a pinnacle) onto the top of the post to limit damage while working on the signal. 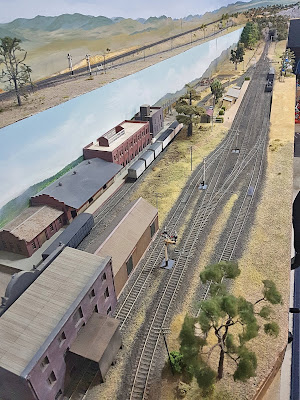 Since Marcus Ammann has added working lights to his signals (WSF versions from my Signals Branch shop) on his Main North layout and they look good and can be seen from a distance I have decided to do the same. Some signals that can't be seen directly such as on a curve without direct line of site to the arm will have fascia mounted LEDs so I won't wire the 0603 Warm White SMD LEDs into those.

If you are interested I did a blog post on adding the LEDs to the above bracket. As a comparison to the photo above; the photos of the bracket signal in the post show it with the original printed handrails and ladder.

A big job doing all the signals for the layout but I think it is better to do it this way than piecemeal.