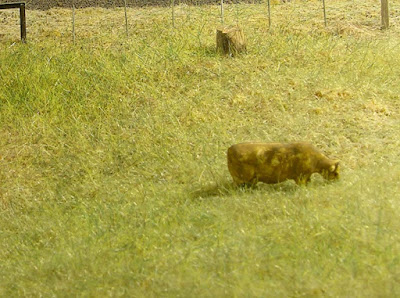 I had a comment from IainS on my last post about how good the cows looked in the grass and how I got the effect.


Well, those two cows are Bylong layout veterans having first been used when Bylong was exhibited at the AMRA Sydney October Exhibition in 1979. Those who have the July/August 1981 AMRM will see them in one of the Bylong article photos.


Unfortunately they are somewhat crippled as I cut them off at the knees back in 1979 when the stood in the 'grass' I used then, coloured sawdust.


These days the 'grass' they are standing in that is tickling their bellies is made of a layer of fine grass flocks of various colours to give a dry look which then has green and brown static grass applied over it.
Posted by Ray P at 7:00 PM