A bit of fun with a Camco CW

It has been a long time between drinks as they say (see Craig's Shed blog). It has been a month since I last posted and life has been interesting to say the least. I recently found out that I have a prostate cancer issue. Now this is the lowest grade you can have but never the less I will be having the full treatment (operation later in November is likely). The Doc said I could leave it for up to 10 years however I had lymphoma 10 years ago and it was 5 years before I could relax and safely conclude that it was gone. I have had some full body and bone scans and there is nothing else lurking as a primary or secondary cancer which is good. I am having the operation as I don't want to waiting around watching my PSA level rise and having a prostate biopsy every year - one biopsy was enough!

Anyway, back to the subject line.

I picked up some Austrains GSVs at the Liverpool exhibition and received the replacement pack of correct roofs. Now this left me with some spare CW roofs so I had a look at what wagons I could use them on.
I found that they would probably fit on a Bergs CV but the roof for that one was firmly glued on (see earlier blog of CV as storage shed at Wollar loco depot).
The next wagon I checked was a lone Camco CW that was going to go off the layout now that the Austrains CWs had arrived. The roof of the Camco CW came off easily and the Austrains roof just clipped on as nice as you like. Another reason to replace this roof is that the roof supplied with the Camco CW kit is actually a GSV roof, just the opposite from the current Austrains GSV roof issue.
Well, I thought this modification/rebuild might be fun.
The underframe on the Camco CW was lacking in detail and the solebar was very 'tall' so I decided to fit another S truck underframe to the CW (I refer you back to a previous post in which I fitted a Camco GSV with an Austrains S truck underframe).
Here is a photo of a Protype CW, the Camco CW and an Austrains CW for comparison. I think the Protype CW may be a candidate for an Austrains S truck underframe as well but unfortunately the body is about 1mm longer than the Austrains CW roof but that roof has to go. 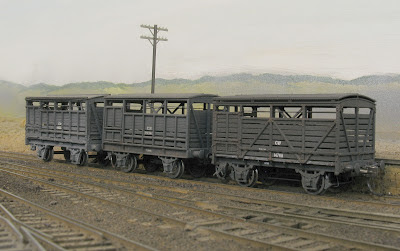 Here is a picture of the Camco CW and other 'parts' ready to be glued/screwed together. Note the end of the floor at the right has been modified to allow the floor to drop into the body to reduce the overall height. The left hand end has yet to be modified. About 1mm of the 'floor' is removed down to the 'frame sections either side of the coupler mounting area. The two frame projections sit on the step on the inside end of the body. Study the photo and you will understand what I mean. 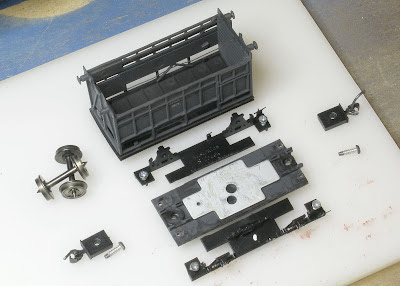 And here are a couple of photos of the modified Camco CW with an Austrains CW for comparison. 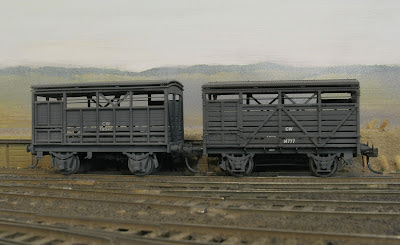 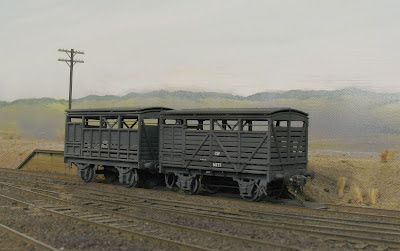 The Camco CW is a different version and while not up to the quality of the Austrains CW it does still look reasonable so I think it might just stay on the layout. It turned out slightly taller than the Austrains version and it appears from the photo that the top plate of the body side frame is set slightly high. If the top plate was removed and lowered by its own thickness then that would resolve the problem. I should also point out that I could have fitted the new roof to the ends and sides a bit better by filing the end profile of the CW to match the new roof curvature. I think that I might do that as the higher roof line makes it stand out and the intent is to have the CW fit with the Austrains ones.

Anyway, there it is, a quick and dirty improvement.

Hi Ray
I have just bought the Train Hobby Book Blayney to Harden Cross-Country Line. On page 50 and 51 there are 4 cw's behind 3008, the first 2 are a different height to the second 2. Much like what you have modelled, very interesting.Worth a look.

Fingers crossed with the prostate deal.

Ray, Dad just went thru the op and treatment - all went well, and he was bloody glad to get it over asap. Thanks for the tip re the Gwydir signals on Saturday - I picked up two to have a go at - hopefully not too much of a struggle per your experience. cheers nick

Ray, ALways look forward to reading your posts for ideas for building wagons and ideas to try out on my layout. Thanks for that.
Sorry to hear you have to battle the demon again. My father has just had surgery for that very thing and he is going well and 72. I myself am one year into my battle with eosophageal cancer and have to get thru the next 4 with no reoccurence to be in the clear so I know what you are going thru.
Cheers and stay positive, Chris

Nick, have fun with the signals, it was Ok to make but I just wonder how it would be if you had to make many.

Yes, we both know what it is like, makes you think about what is important. I hope it all goes well with you too.

The models look good and I agree with Andrew on leaving it as is to better reflect the prototype.

Sorry to hear about your health issues; something that a friend advised helped him with his "issue" was this website http://www.forksoverknives.com/ YMMV, but best of luck with the treatment