Somewhere on the net a few weeks ago I came across the actual name of the stretchy thread that can be used for fences and telegraph wires on the layout. When out with Chris recently we were near Lincraft (a haberdashery - materials and sewing plus craft store) and I asked Chris if she had heard of Knitting In Thread, she said yes so we went in.

Now the similar stretchy thread that you can buy in a hobby store is about $20/spool of 100 feet, this is 20 cents/foot. My main line telegraph poles have two crossarms with six insulators each so twelve insulators and 100 feet would only give me about 8-9 feet of wires (my poles are approx. 100 scale feet apart.

The spool/bobbin of Knitting In Thread was $6.95 for 220 yards (660 feet) of white thread which is 1 cent/foot so we bought a bobbin. I decided that at that price I would see how it went and deal with the white issue.

Well, it certainly works and the thread can be blackened or at least darkened by the application of some black ink once in-situ.

I found that the best way to use it was to tie it off at one end pole insulator then move along the run of telegraph poles to the other end pole gluing the thread to each of the insulators about three or four poles at a time, putting a slight stretch into the thread as you go. When you get to the other end pole wrap/turn the thread around to the next insulator on the crossarm and proceed back down the line to the pole at the other end gluing as you go. If found that the best way to hold the thread tight while applying the glue (ACC/Super Glue) was to put a large pair of tweezers through the spool/bobbin and keep the line tight (see the photo below). Keep doing this until all wires are done with the one length of thread. I worked from the bottom crossarm rear insulator to the front insulator then moved to the top crossarm rear insulator and repeated the process. I trimmed the tied off thread end pieces once the glue was set.

In between applying the thread to each crossarm I applied some black ink to the bottom wires with a cotton pipe cleaner which enabled me to do three wires at a time. The ink doesn't want to stain the thread near the insulators where the glue has absorbed into the thread but it isn't that noticeable. The effect leaves a little shine but overall it reduces the visibility to perhaps about one third of when it is white (see photos below). 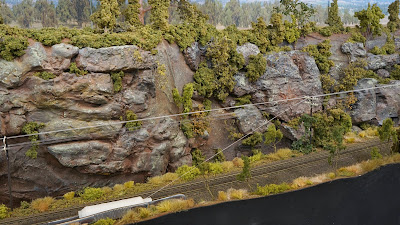 Keeping the thread tight while gluing the last few insulators 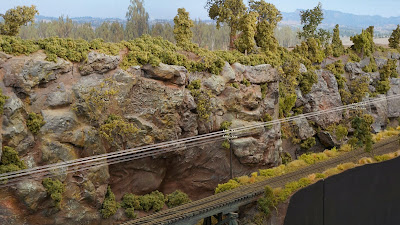 Lower wires blackened﻿ prior to stringing the top white wires 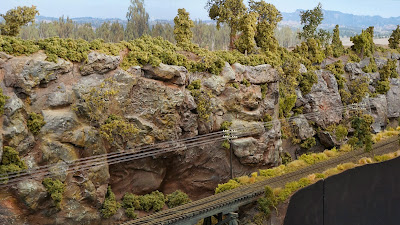 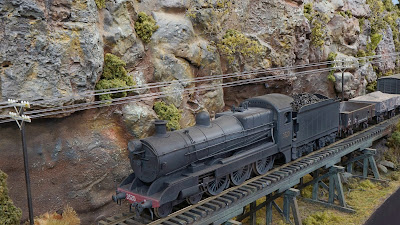 As can be seen in the above, once blackened the wires can be seen at times but at other places they virtually disappear into the scenery. I might get another roll and try soaking it in black dye for a few days so that the dye can penetrate all the way into the centre of the bobbin, the actual bobbin is plastic so it won't be a problem like a cardboard bobbin. Don't wait for the outcome of that though as I think I like the current blackened wires, try it yourself. The white is easier to see when stringing the wires anyway.

As a rule I don't glue scenic items in place but the two end poles need to be very firmly placed. In difficult to reach places I have decided that the best way to do the poles will be to get a long length of wood, drill holes in it to match the pole spacing, remove the existing 'no wire' poles from the layout (remember they aren't glued in place), wire the poles, then carefully put them back in place on the layout, gluing the end poles into the scenery and bracing them as required until they are set. It would be almost impossible to have the wires run uninterrupted all the way along the main line so the poles will be done in sections with some sort of scenic break where possible at the ends of runs. I already run the lines of telegraph poles off the edge of the layout or up into trees in places so this shouldn't be too much of a problem. There will inevitably be missing bits of wiring, e.g. at the drawbridge entry into the layout but this can't be helped.

So given how long the main line is and the potential for also wiring fences, the question is have I started something on the layout that I might regret? I don't know but I do like it.
Posted by Ray P at 11:32 AM

Ray, you are a genius. My wife uses this type of thread in her knitting. It would be ideal for my fences as it is fine and pass through the holes in the posts much easier.
Jim.

Hi Ray.Looks like another good idea I would have never given it a thought using this type of thread.All the best Peter

The line wires look great something to remember with colour is it depends what type they were.For phone circuits they used bright copper that discoloured very quickly into greeny white colour and for vital signaling circuits they used copper covered with black pvc insulation so they appeared black.

Best thread I've read in a long while!

Sounds like someone has a little to much time on his hands these days.
You really should consider getting involved in some sort of hobby !

Ray, I have to agree that you must have too much time on your hands, but the finished work certainly makes what was empty spaces look right.

long term project when all, or most other work has been done though.

Yes, definitely long term, a little at a time. It should only be done when a scene is virtually finished so that it doesn't get in the way.

Hi Ray, have been following your blog recently as I plan my own layout. The knitting in thread is available here in Qld from Spotlight stores in black as well. My Mum who is a keen knitter showed me some of the black she used on a jumper a short time ago.
Regards
Brett

Thanks for that good news, see my latest post.

Ray, I know I'm going to regret this and will be howled down by your faithful followers (I'm one), but I have to be the only negative commenter on the great man. I have followed your blog for several years and you must be aware that your modelling is the benchmark for many of we mere mortals, particularly because you strive to achieve such prototypical accuracy and realism. So here goes (gulp), your wires are too straight and taut. They never look like that in reality. Apart from the effect of gravity, copper wires are deliberately left with a sag to allow for contraction in cold temperatures. Sorry, not intended to offend but I think I know how you value authenticity.