Last night at our train meeting I was taken to task by one of the Ramblers on the fact that my wires don't sag and I have also received a similar comment on my 'Have I started something I might regret' post.

True enough, a study of photos will show that they do indeed sag but in other photos they will be almost straight with little sag no doubt due to the prevailing temperature. It can also be seen that in most photos the wires can't be seen on telegraph and power poles and that is how I normally handled them on the layout.

Now here though is a photo clearly showing the sag in the wires in February 1969. 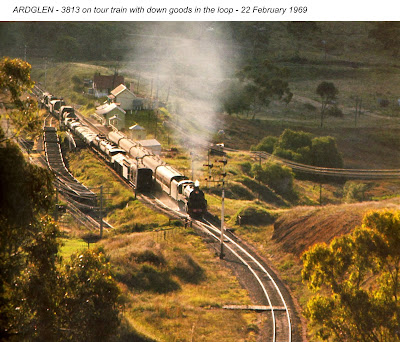 And here is another photo of the same wires (on the left above and over the 48 class below) with very little sag in March 1981. 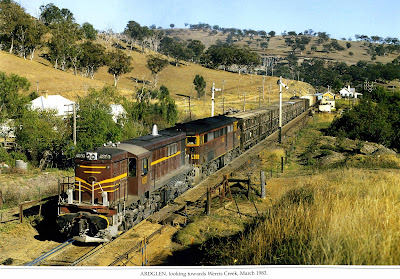 As an aside, last night we were looking at the above (and below) telegraph poles at Ardglen station on Ron Cunningham's Werris Creek layout and after counting the insulators (48) we couldn't decide if we (meaning myself) would do them with the stretchy thread or not. There would be quite a strain on the two end poles even with the smallest amount of stretch on each of the 48 wires and as such the end poles may need to be remade with brass rod (perhaps the second last pole at each end also). 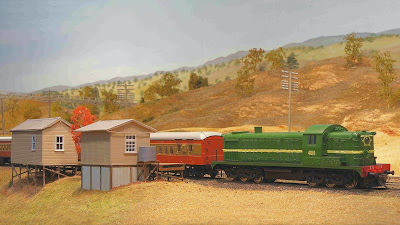 I had been wanting to try the look of the telegraph wires but due to the cost of the stretchy thread available in hobby shops I had only used some purchased rust coloured Berkshire Hobbies E Z Line thread for a small section of fencing, I wasn't that impressed with the rust colour as when stretched it took on a new copper wire look.

I also had a comment posted that discussed the colour of the wires, copper wires for instance being a whitish pale green and power lines being black due to the PVC coating. I feel that the black ink makes the wires go grey which in my mind is close enough to pale green not to matter. Regarding the black PVC coated power wires, I really can't remember if they were coated in 1965 or not but see below for further comment.

When I sourced the knitting in thread I decided to give it a go. Then came the decision regarding the sag and I felt that it would be very difficult to get 12 wires all with the exact same sag so I went for the taut look.

As can be read in my last post there does appear to be black knitting in thread available and certainly for power lines I might have a go at the sag as power poles don't carry many wires and if the wire is not stretched it will look thicker as power wires do. The advantage of this thread is that it will stretch a long way if you catch it when reaching into a scene so that alone is worth the effort. Incidentally, the E Z Line comes in white, black, green and rust so the green and rust colours may be available as well as white and black.

I think I will do some fences wires with the black to see if they look more like rusted wire than the rust coloured E Z Line. Of course white thread coloured with the black ink could look like new wire.

My layout is nothing more than an experiment in techniques and this is just another.

Because in the hobby we have to work with in the physical limits of the materials we have available to attempt to replicate the real world we have to rely heavily on impression and perception to fool the eye (and now the ear but that is another story).

There is a rule called the 80/20 rule and it goes like this, it will take the same amount of time/effort to achieve the last 20% of some target as it did to get to 80%. I like to think of myself as trying to achieve somewhere between 80-90% and this is both related to having a largish layout and not being so focussed that I am driven.

To me, my hobby is about pushing the boundaries of what can be achieved, sometimes it works, sometimes it doesn't. Does this particular effect work, I don't know at the moment but I think I will probably carry on with it.

Is this a justification for doing something 'wrong', perhaps, but it is all good fun.
Posted by Ray P at 12:19 PM

Could I offer some comments on wires and sag.

In regards to your first photo at Ardglen, it's probably the telephoto lens that has accentuated the sag.

Being in the electricity distribution industry for nearly 30 years, I can safely say that electricity lines are built to different standards than communications type wires (Telecom and railways).

Also, electricity wires are designed to have a certain amount of sag between poles. This is calculated from a number of factors including the type of conductor, the amount of load (current) they are designed to carry, effects of wind on the wires along with other characteristics.

Now, not being experienced with communications line design, I would think that because the poles generally carried many wires, and not just 2, 3 or 4 as in electricity, and not being at such a high voltage, they could get away with less separation between conductors.

You will probably find that keeping communications wires taut and electricity wires with a small amount of sag will look more realistic and help tell the difference between the two.

I hope this helps.

Further to my previous comment, I also should have made the point that communications line construction are obviously designed to have a certain amount of sag as well, just not as much as electricity wires.

As with anything we model, observing the prototype will aid in recreating it in model form.

Another thing to consider is movement in the wires. It isn't an issue with still photography however if you are preparing video of your layout then any transfer vibrations etc could become visible in close up photography. A comparison of this is evident in the excellent 'weathering artist' series produced by Model Railroad hobbyist. The diorama is shot outside so wind is an issue however this may help you make a call for taut or slack wires one way or another.

In addition to what Ian has said, something else to consider in this is where, & the locality you are actually modelling when considering the various poles & wires to string.

Using the Ardglen photo as an example, the sagging set of lines are the public or PMG/electricity wiring, which in many (not all) circumstances followed the railway lines.

The set on the other side of the station are the railway service lines which carried the railways own telephone service lines, as well as the common open party type lines for the use of control & train running. Other lines included power for the electric staff & general instrument working in the signal boxes.

The further away from the major main lines & into secondary line territory you got, the fewer lines were found on the railway poles, & they usually were only around 4 in areas of staff & ticket working, as only the control phone was used.

The basis of the sag was dependant on the extremities of the weather, certainly sagging occurred in the hot summers & somewhat worse further out, but in the winter some sag existed when ice formed on the wires weighing the wires down, otherwise only minimal sag was noticed certainly they were not taunt on the poles.

The other aspect is that depending on age & weather conditions in the poles ground setting can cause problems as well, after rain the pole may also start to fall, & I have seen several that were burnt at the base after firebreaks burnt into them meaning the wires actually held them up.

The other thing often seen out west & when I was at Parkes the run the Ivanhoe of 231 miles of boring terrain meant some strange ways to keep alert, & one of them was to count the poles per mile, then how many masts, then insulators, on them, add them up per mile.

I remember doing well until I noticed many insulators totally missing, some with the top knob section missing, then there were the white porcelain types also the clear, brown & green glass insulators that were often mixed on the masts, & many broken on the ground under the masts.

How far can you go, or really want to in order to be completely accurate for the prototype?

I think having the poles & masts with some wiring with mininmal droop would be more than enough to show a representation of what actually existed, also I would not be personally having any more than 2 horizontal rows of masts, as my layout is a basically a bit further out somewhere in NSW than Ardglen is.