I have been working on a 3D print of a NSWGR Fettlers Cottage for some time for my Cassilis branchline terminus station. I have had the plan for this for several years and always liked it. After doing a pilot model and amending the 3D designs I am now ready to make it available on my Shapeways Signals Branch shop. It can be found in the HO Architectural and HO Infrastructure sections of my shop.

There are three parts of the cottage that need to be ordered to complete it, two in the White Strong and Flexible material and the finer detail parts in the Frosted Ultra Detail acrylic material.

Here is a rotatable and zoomable view of the 3D model.

The model will be about AU$145 depending on the exchange rate. I have used every trick I can to reduce the print cost short of designing it as a multi-piece 'flat pack' which can take away some of the advantage of 3D printing.

The three parts that need to be ordered are:

The cottage has been modeled from NSWGR Standard Fettlers Cottage Plan S.T. 106 of 1933. 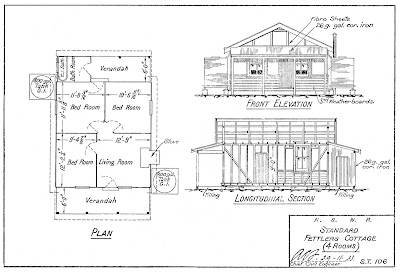 I have not been able to find any photos of these timber framed, weatherboard and fibrous cement sheeting ('Fibro') cottages so here are some images to show what I think the NSWGR 'Stone' colour scheme of the era and later into the 1960's could have been like. Of course in the early 1960's the NSWGR started to paint railway stations and associated buildings in the pastel colours.

I would be very interested in any photos of these cottages, particularly showing the colour scheme.

The only magazine article that I am aware of regarding the NSWGR 'Stone' colour scheme is in Branchline Modeller No.1 - 'STONE' COLOUR SCHEMES FOR NSWGR BUILDINGS by James McInerney.

Here are a couple of views of the HO pilot model. Do note that there have been some changes to this model. The doors are now in the FUD high resolution acrylic material and the corrugated iron in WSF on the verandah roofs and the walls of the bathroom at the rear have been modified to make the corrugations stand out better. The roof corrugations in the WSF are very good so the model orientation of the body of the cottage in the printer was obviously different from that of the roof. 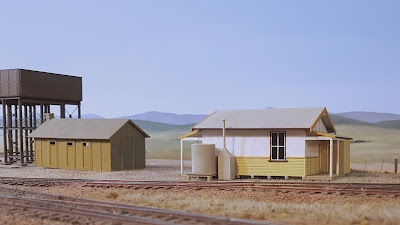 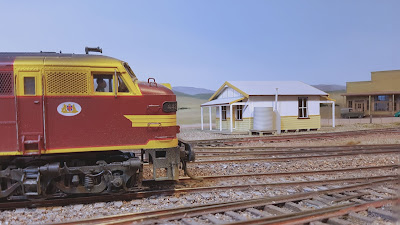 The wall and verandah structure model part has supports for a floor and tabs/slots for the internal walls if the modeller wishes to add these. The floor would be .020" thick and the slots for the interior walls have been designed for 1mm thick (0.040") wall material.

I have not included downpipes from the gutters to the water tanks so that the tanks can be placed in different positions. The downpipes can be made from 1mm diameter plastic (Evergreen 211 1mm/0.040" Rod) or copper/brass wire.

Lastly, I was unable to get the small hole (for the downpipes) in the top of the water tanks to be printed as each time I uploaded my model to Shapeways it would assume that the hole needed to be fixed so the upload program closed it. If you wish to have the hole I have made a locating ring inside the top of the water tank (accessible from underneath) where you could drill through. I found it easier to use a drop of black paint on the end of a 3mm diameter piece of rod.

800 Gallon Water Tanks on Stands
I have also made available on my Shapeways Signals Branch shop the 800 gallon water tanks on stands. These come as two tanks on a sprue. This is to reduce the cost per tank as Shapeways has a base US$5 charge per item before any printing cost. Basically a single water tank would be much more expensive than the per each price when buying two on a sprue (one print item).

Corrugated Iron
Also available are sprues of corrugated iron sheets both flat and bullnose for verandahs in 10 foot lengths, 30 sheets of 8 corrugations and 30 sheets of 10 corrugations wide. These are in Frosted Ultra Detail acrylic material the only possible material. The price is relatively expensive and I am making very little on these. I have made them available as someone might want to use them, particularly the bullnose as it is very difficult to make with the usual model corrugated materials.
Posted by Ray P at 12:08 PM