After a Little Shunting

A few days ago I was shunting a mixed train at the Cassilis branch line terminus station and came across a problem, admittedly I had run into this one before.

I had a short train made up of eight 4 wheel wagons, a HCX and a SHG guards van arrive in Cassilis yard, stopping so that the HCX and SHG were in the platform to allow passengers to alight and for the unloading of 'out ofs', etc.

OK, easy enough but now the HCX had to remain in the platform for the moment but it may need to be moved later to allow shunting to take place which involved running around the train and ultimately assembling the consist in the platform road for the return trip.

I started by leaving the HCX and SHG in the platform but quickly realised that this wasn't going to work as I had several S trucks of locomotive coal that had to be shunted into the loco depot to the coal stage (non-existent at the moment). So the HCX and SHG had to move, to where though?

Ultimately the HCX was placed in the wheat siding (on left at far end of yard in photo below) and the SHG was moved to begin making up the return consist.

The shunting problem made me realise that the yard needed a place to store the HCX or the CPH railmotor if necessary if it arrived while there was a goods train at Cassilis.

I had a railmotor/passenger car siding in an earlier design but removed it as I thought the station was getting too complicated.

Here is a photo of a number 6 Fast Tracks Y point (turnout) paper template in place on the loco depot turntable lead, the curves of the Y point fit quite well and there is just enough room to fit in the required siding next to the turntable. 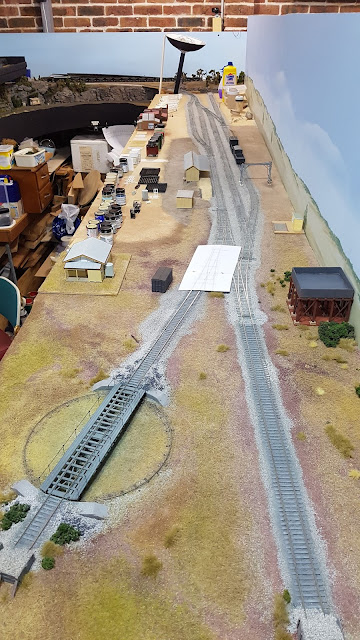 So, now I have another issue, do I build a passenger car shed or not and where will I get a plan? I think I saw a plan in one of my Byways of Steam books, I must go and search. Of course I will also need a fueling point for the CPH as well.

Wait, and now I have to scratchbuild another point, rats!

Oh well, there is always something in this hobby that we have to do before we can enjoy other aspects.
Posted by Ray P at 10:59 AM

For plans for the shed try the coals to newcastle site found this the other week when i was looking for plans for a engine shed . Just look under documents and scroll down to nswgr plans then 1972 station plans there are plenty of plans there for most of the nsw buildings and trackside infrastructure. Hope this helps.
Booly

Thanks for that, it is a long time since I visited the site and a lot more documents have been listed. I found the plan but it is too long for the area I have so the passenger car/railmotor will just have to sit out in the sun.

I did enjoy myself looking at some of the documents though.

Not every location that had carriage dropped off had a carriage shed. IIRC Coonabarrabran had the mail arrive with 2 carriages sometimes 3, the 30T would become the Coona shunt engine with the carriages left either at the station, not an issue on the day the Gwabegar service ran.

Other locations left them in a siding near the station, some had a dock road for a carriage or two.

Narrabri had a carriage shed which was basic for a single carriage that came off the mail of a morning, do not remember there being any platforms to clean it as the station staff had to clean the inside only, it was located on the eastern side of the loop.

Unless you desire a shed, a simple dock road at one end of the platform might suffice, with access to the carriage itself from the platform and not to the van. Remember Wollongong had that arrangement on the down, at the Bomaderry end.

Thanks for the input. I have decided that there will be no shed as it would obstruct the view of the headshunt/yard end lead and tend to take away the wide open look of a branch terminus.

No room for a dock road either.

The standard shed length is noted as being 150'-1", so you are right a bit big for Cassilis, you could halve / compress it to cover just a single 72'-6" car / ACS perhaps?

A quick check of the ARHS Signal diagram Vol.3 CD Rom, I noted 14 locations that were provided with a single road carriage shed and only eleven of those were branch line terminus locations (and mostly in the hot north western regions).

The remainder of branch line terminus locations did not have any specific carriage siding that I could see. Most though had an ash / coal siding in loco. So am sure crews would have been inventive and used "local rules" to get their required shunting done as you did placing the HCX into the wheat siding (if it wasn't being used).

Would an alternative have been in this instance to run around, couple onto the SHG, ensure passengers have detrained and out-of's unloaded, draw back, then propel train forward into loco siding to detach the required S trucks, then withdraw and continue making up the return train.

But then the S trucks in Loco would need to be moved so as to be able to turn the loco for the return trip?

Hope this is of interest.

Tom, no room for a separate ash/coal siding unfortunately and the visibility issue for shunting decided against a shortened carriage shed. Thanks for the info though.

Regarding the shunting. there is always more than one way as we know. This was just a one off shunt and I haven't revisited it to try again and did originally want a railmotor/car siding.