Rolling
I have been working on my Austrains FS and BS carriages to reduce their weight and to improve their rolling capability.
The following is a simple and quick method to achieve this.
Begin by disassembling the coach, a little bit of leverage on the bottom edge of the body will release it from the retaining clips. Remove the two screws that hold the lighting board on then do the same with the three very small screws that attach the interior partitions to the chassis.
At this stage you will see two long steel weights that also act as part of the pick up circuit for the lighting.
Unsolder the two fine wires, you will need a hot soldering iron or alternatively snip them at the solder joint with the steel. 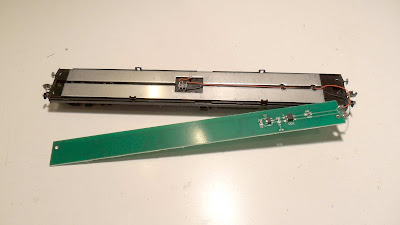 Next cut four small pieces of shim brass (clean and polished) about 25mm long and wide enough to sit in the floor groove (see photo below).
Super glue the shims over the holes where the small pickup springs come through the floor, you will need some weights to hold the shim against the floor while it sets.
Solder some wire between the two brass shims on each side. I used straight brass wire that I made by stretching some picture hanging wire between a vice and a pair of pliers. Finally solder on the wires from the switch. 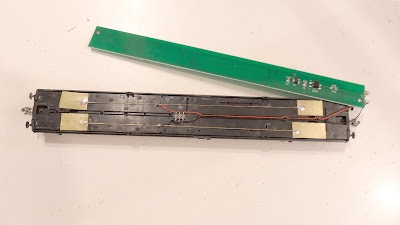 I took the opportunity while the coach was apart to paint the interior a mid-brown wood colour with maroon seats for the FS and dark green seats for the BS.
Reassemble the coach.
Now to improve the rolling, turn the coach upside down and using a small jewellers screwdriver lever the inner brake shoe casting up and out from the two retaining clips.
Chamfer the inner rear edge of each brake shoe (closest to the wheel flange) as it appears that this is where the brakes are touching the flange and where the resulting squeaking comes from. 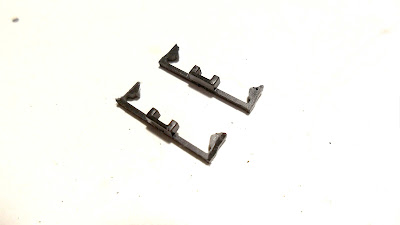 Clip the castings back into the bogie and you are ready to see it roll.
The casting can be tricky to get back into the retaining clips and the small screwdriver can assist in pushing it gently until it clips into place. It has a tendency to want to lay over but perservere and you will get the trick of it.

Weight
The coach originally weighed 155 grams but now only weighs 105 grams.
Now as it comes the mass of this coach is to the HO NMRA Recommended Practice RP-20.1 which is 1 ounce of weight plus another half ounce for each real 1 inch in model length.
The FS and BS are 9 inches long so that is 5 1/2 ounces which is 155 grams, spot on.
However, as we have found, this is too heavy for our HO NSWGR steam locomotives even without the built in braking.
I use wagon and coach mass formulas that are the result of experiments carried out with Terry Flynn back in the 1980's on my BYLONG layout with 4 wheel wagons at the front of very long trains on 1 in 40 falling and climbing grades.
The formulas were developed to try to get realistic train lengths with model NSWGR steam locomotives as the NMRA weighting formula does not work for our small steamers and also doesn't work for 4 wheel wagons and is overall, too heavy .
For passenger coaches I use a weighting formula of 1.8 grams per foot of body length +/- 10% so the FS and BS just pass the minimum mass of 105 grams, a little more mass could be added with some HO scale passengers.
I also use a goods wagon weighting formula that is 2 grams per foot of body length +/- 10%.
Terry has similar formulas on his web site here (just close the pop up windows that are a part of his free web site).
As trains on my BYLONG layout are banked from the rear over much of the mainline length on grades of 1 in 40, I feel that this is a formula that works.
One proviso - Get as much weight as you can into 4 wheel wagons as an empty wagon can be a challenge to even get to the minimum of my range let alone the NMRA RP-20.1.

Operation
I tested these FS and BS coaches in a passenger train with an Austrains NSWGR C36 class and found that I could not get 1 Austrains FS, 1 Lima MBE, 1 Powerline FS and a Powerline MHO up my final ruling 1 in 40 grade. This grade start out as 1 in 40 but has a curve near the top which challenges the locos.
After the above modifications the C36 could pull the Lima MBE, Powerline FS, 2 Austrains FS, 1 Austrains BS and the Powerline MHO, quite a change.
I should note that the C36 had the front bogie spring removed and some sheet lead in the cab roof for both tests.

Here is an Excel spreadsheet that calculates the formulas for a range of existing passenger coaches and wagons.

I leave the above weighting formula for you to ponder on.
Posted by Ray P at 6:36 PM

I have been using Terry's formula for a while now and it works well. The Austrains 4 wheel tanks are way over the NMRA weight and i have been happily cutting the weights up to get them to something more reasonable.

Yes, I have been using this formaula since we first developed it. Terry of course has done the running to try to get it accepted but he can be a bit direct.
I do have some heavy Protype wagons as the detail is very good the masters having been made by Mike Mc Cormack back when we were all a lot younger.
I do use these carefully in the trains that are to be banked but place them near the front or right at the back. The dangerous part of the train is of course in the middle when banking. The Protype wagons are a bit difficult to remove excess weight from and I will put them into my little model museum when suitable replacements appear.