Sorry, but here is another signal related post although it is also related to progress on Bylong.

The instructions on the Signals Branch blog for my 3D printed signals discuss using 0.8mm SMD LEDs to light the signal aspects so here are a few photos showing how I did a bracket signal.

Firstly it is best to buy the SMD LEDs pre-wired, they can be bought without wires but they are so small that soldering very fine wire is difficult.

The lamps on the signals have a slot in front and back. The rear slot is to allow the wires to come out and the front is a slot as the minimum wall thicknesses make it difficult to have a lens or hole.

The 0.8mm SMD LED will be a slight push fit into the hole in the top of the lamp and the square LED sticking out of the front of the tiny circuit board will fit into the front slot.

The 0.8mm SMD LEDs are to be gently pushed vertically into the body of the lamp. I found that I had to use my finger nail to push it in but a toothpick would also work. Don't use a metal object to push the LED home as damage may be done to the fine wire on the top end. The other wire is at the bottom of the LED. Ensure that the wires align with the slot at the rear of the signal as it is pushed into place.

Glue the wires to the signal with Super Glue progressively stopping at each change of direction. 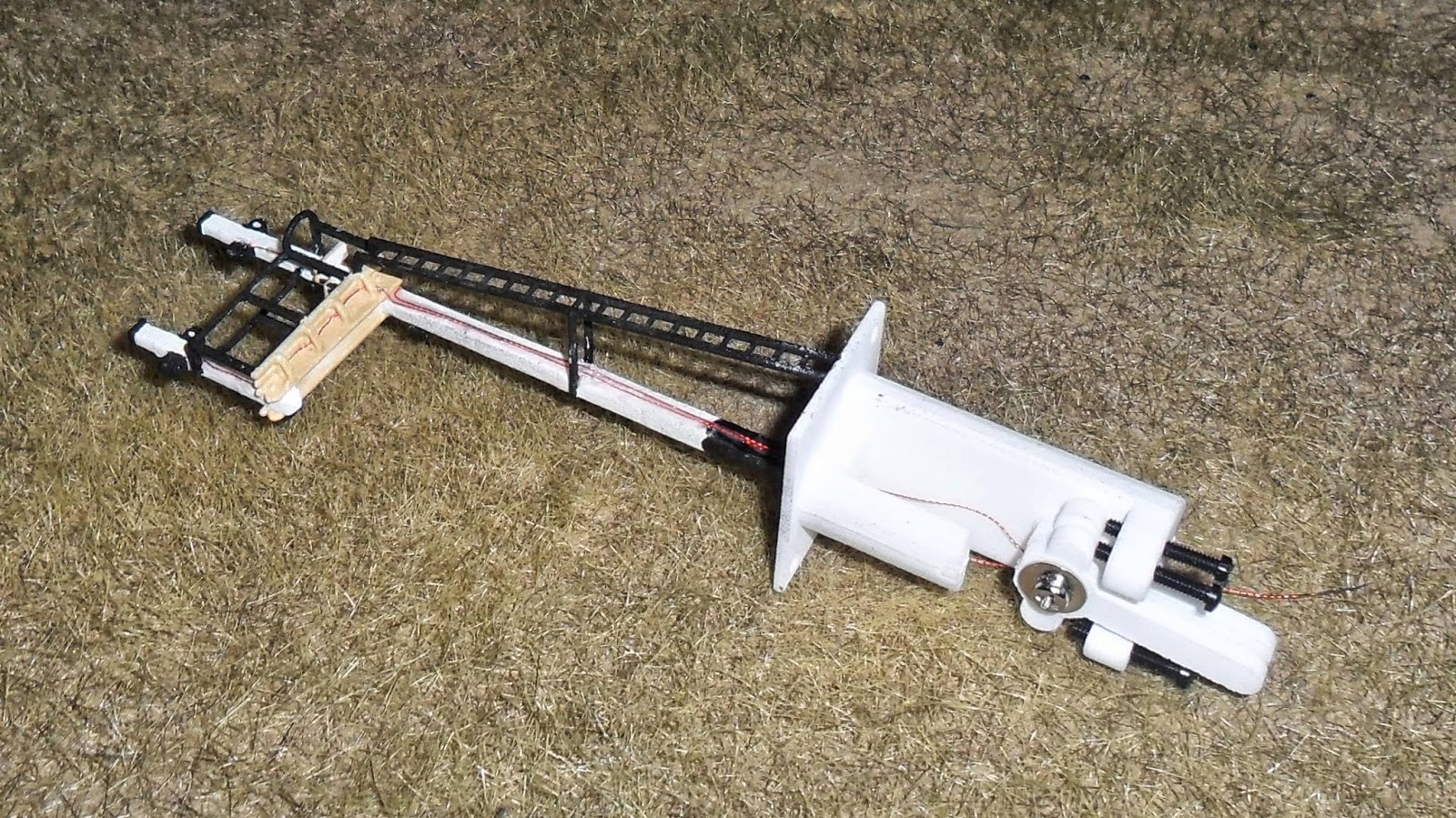 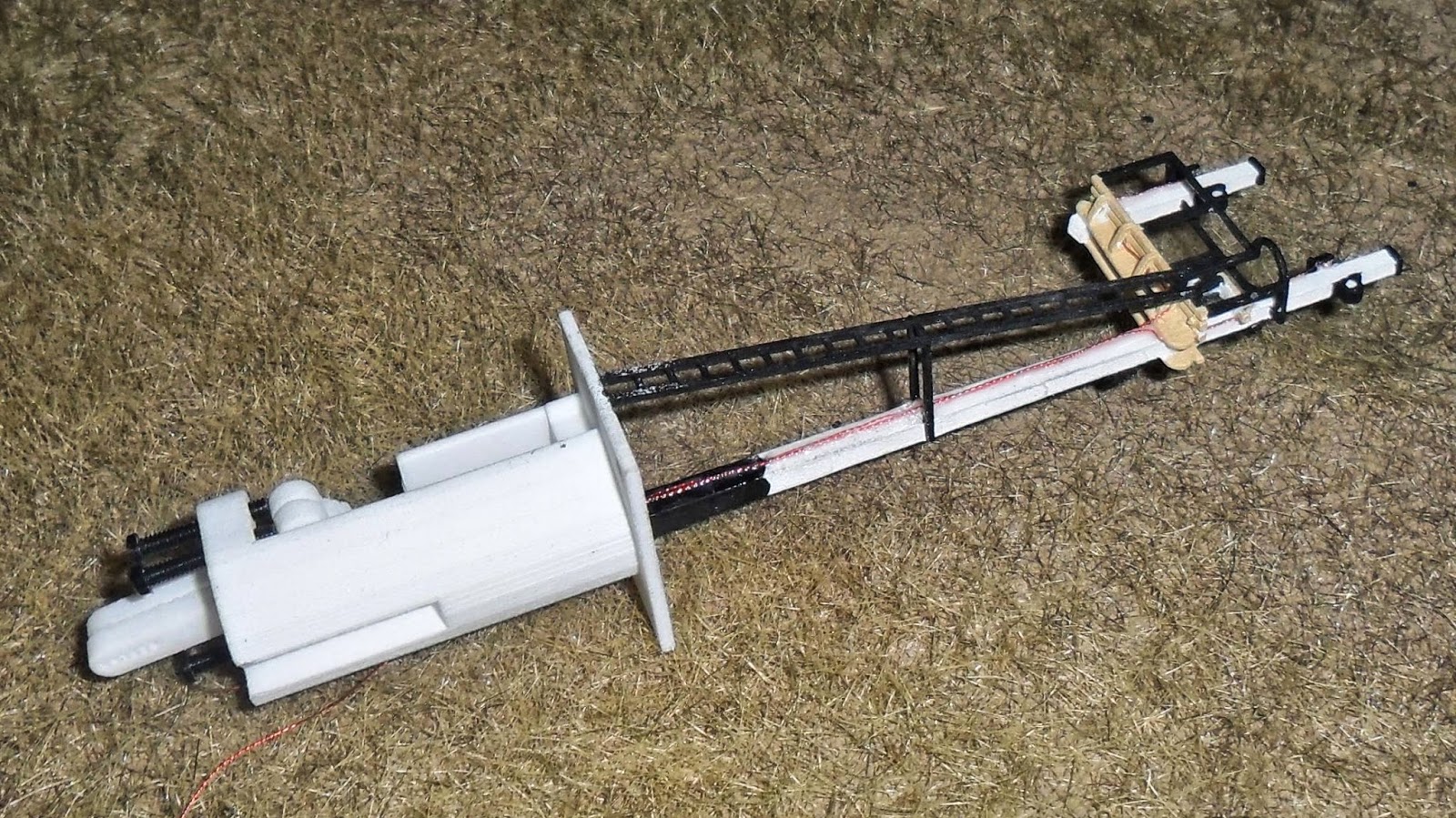 A small 2 pin plug and socket is made by cutting up an integrated circuit socket. solder the long pins of one half to each side of the circuit board as shown on the diagram and photo below. Solder the wire from the LED to the two connections at the other end of the circuit board. The longer wire of the LED goes to the +ve terminal and the shorter wire of course goes to the -ve terminal. I have used a 1K Ohm 1/2 Watt resistor so that the light shows through the spectacle plate of the arm during daylight but any value from 1K Ohm to 10K Ohms could be used, your choice. 10K Ohm will probably not show during 'daylight' (room lights on).

Glue the circuit board to the signal where shown in the photo below and tuck the excess wires of the LEDs out of the way up in between the two halves of the mechanism.

The wires on the male plug are soldered across the two holes rather than into the holes, this is needed from clearance from the main operating crank of the signal (see photo).

Please note that the plug and socket doesn't have to be on the circuit board or even used for that matter. This method is presented in case the modeller wants to disconnect the wiring from the signal.

Once it has been confirmed that the LEDs work then the wires can be painted over or even smoothed over with a filler. It has been found that Selleys Spakfilla can be applied and once dried the signal can be flexed without it falling off. Spakfilla is an interesting material, it has no real weight and must be pushed onto the surface then carefully smoothed with a metal spatula or similar tool.
﻿

The light showing on the posts in the photo above is reflecting back off the rear of the signal arm lenses, perhaps some matt clear might reduce this.

I found that the LED was not yellow enough to give a green glow through the Tamiya X23 Clear Blue so I give the blue lens a coat of Tamiya X25 Clear Green.

Now it looks like I will have to light the Brakes Landmark, what have I started....

Installing lights though is a long term project for Bylong as I would like to operate eventually at 'night'.