This blog like all things new is a work in progress so please forgive the amateurish attempt.

BYLONG is the name of my HO scale model railway, it is based on a once proposed railway line in the upper Hunter Valley region of New South Wales, Australia. I say 'once proposed' as it was finally built in the early 1980's as a means of extracting coal. The original proposal began life in about 1911 and the railway proceeded in fits and starts until abandoned after the Second World War with almost all but the track in place. There were several tunnels and bridges constructed by the time it was abandoned.

My interpretation has the line being built about the time of the first proposal, this was so I could model timber station buildings, brick tunnel mouths and bridge piers. The infrastructure used in the actual construction of the original abandoned line was built of concrete.... boring.

My warped history of the line has it being used as an alternative crossing of the Great Dividing Range, part of which are the Blue Mountains just west of Sydney. As such it was upgraded to major cross country line status allowing the larger locomotive classes to use the line.

The layout is point to point and it is in a 20' x 20' garage, around the walls with a peninsular and central staging/fiddle yards. It appears to be two levels but is simply one level that ends up on top of itself with an almost continuus grade, stations being level. The following two photos show the layout, the BYLONG station is to the left of the panorama, I couldn't stitch it together without too much distortion. As you can see by the mess under and around the layout, it's a work in progress as well. There's nothing like modelling on a few square inches of space and you will notice two work benches, when one fills up, well just move to the other until you can't work there either then clean one up ... ;-) 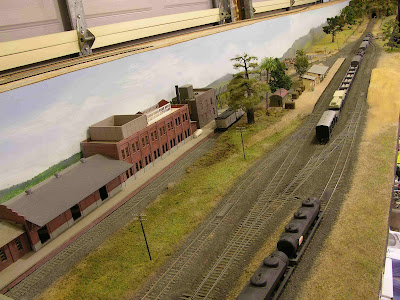 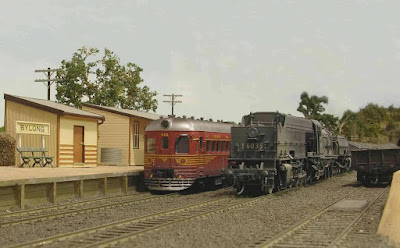 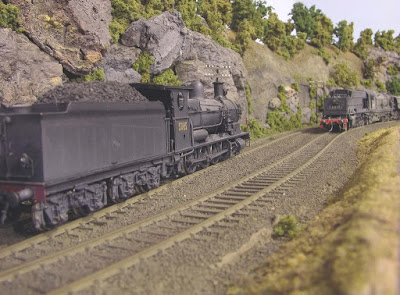 
The long grades mean, that like a number of places on the NSWR, the trains must be assisted. Since I use DCC (NCE) and I like the operating interest and challenge, the longer trains are banked (pushed from the rear). Double heading and consisting is too easy. 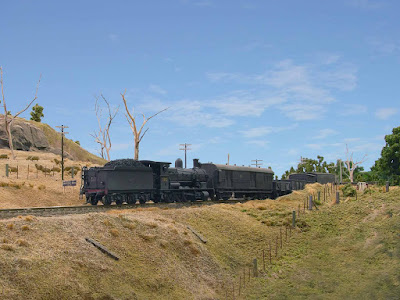 Bank locomotive 5085 drops away from a goods train 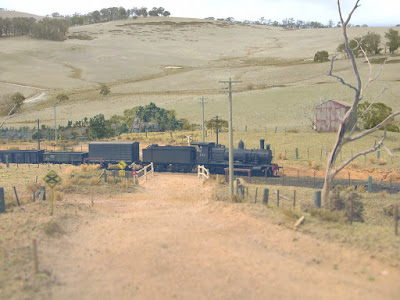 
Although the layout is named after BYLONG the largest station is WOLLAR which has a small locomotive depot from which the bank locomotives operate.

I will post a plan once I draw one, until then this description will have to suffice.