Well, "ask and ye shall receive", James Black has come to my/our rescue with two plans of this type of roundhouse and a series of photos of the Cowra loco shed taken in 2005 that show the lights between the last track and the side wall!
Thank you James, this information is very much appreciated and I am sure that there will be others out there who will be able to make great use of it.
Here are links to the two plans, click on the magnifying glass between the rotate icons to get a high resolution plan and then right click and click on Save Picture As to save to your own PC.
Plan 1
Plan 2
And here is the link to the photos of Cowra roundhouse in 2005.
Photos Untitled24 and Untitled25 show the side lights suspended from a beam that is between the wall truss and the next truss towards the track in the shed.
Another detail I notice is that the timbers aren't black as I would expect but more a dark reddish colour with an 'overspray' of black, just in time for my spraying.
Now James has caused me another problem! A couple of photos show the belt drive for lathes, etc. mounted on one end wall. I think I might draw the line now or I will never finish the shed (this wall will not be easily visible on the layout).
Thanks again James.
Posted by Ray P at 9:33 PM 5 comments:

Wollar Loco Shed - The next stage

While working on ideas for the lighting of the loco shed I had been pondering the construction of the smoke flues that sit above the end of the tracks to direct the smoke from the locos up and out of the shed.
I spent a few hours over the weekend building the smoke flues from Evergreen strip and scribed styrene.
The flues turned out to only be a small challenge and not as bad as I had been dreading.
Mounting them in the rafters was tricky however as the plan in Byways 7 shows the flues suspended between two trusses at around 6' apart but the kit rafters are 8' 6" apart. Without a full plan it is hard to know if the kit has the right number of rafters or if the Broken Hill shed in Byways 7 is simply a variation to the shed modelled in the kit.
Here are two views of the flues, one from the front and another through the rear windows.


Being white and close with a lot of other framing running in all directions they were difficult to get the camera to focus on but I think you get the idea.
I needed to do the flues before the suspended lights as the lights will be very prone to damage and if bent will probably short out the LEDs due to conductive silver paint method I will use as per my previous post for the street lamp.
As can be seen from both photos I have yet to extend the tracks in the shed, I will probably leave this until the shed is finished as I also have to work out a plug and socket method of getting power to the shed LED lighting as the shed will be removable.
The kit as supplied has the floor and track bed built as a solid part of the shed which is good for track alignment with the turntable but it also means that a method has to be worked out if you want to get access into the shed. I think it would be best not to glue the floor to the walls which would make it very tricky when first starting to build the shed until the frame gets sufficiently cross braced to gain some strength. Tell me how I know this   ;-)
The next step will be to spray all the trusses, frames smoke flues, etc. prior to fixing the lights.
Posted by Ray P at 10:14 PM 12 comments:

Yes, I got distracted

Well, I ended the last post with a mention of the hanging lights in the pictures of Lithgow shed. Investigations revealed that these were standard of course however I have been unable to find photos of the lights between the side of the shed and the first track. The lights in the Lithgow shed photo are on a main truss between each track and they only show at Lithgow because at least one bay has been removed opening up the inside to daylight. If anyone has a photo showing the lights towards the side walls I would be interested in seeing it.
While researching the lights I started to work out how I was going to light these shades when they are suspended on a thin piece of electrical conduit.
As an experiment, I have produced the following.
The first photo shows the new Wollar level crossing with a power pole and street light.

The second photo is a night scene.

How did I do it?
I used a surface mount 603 warm white LED with a Tichy lampshade, some brass wire and some conductive silver paint to get the power to the LED.
It involves conductive silver paint from one contact on the LED out, up and over the shade to the wire conduit and then down the pole to a 1K Ohm resistor and power wire. The brass wire conduit is then coated with super glue and allowed to harden for a day after which the conductive silver paint is painted from the other LED contact out and up over the lampshade, over the coated wire and down the other side of the pole to power wires under the pole. The power source is 12v DC.
Pretty cool!
I always was going to light the layout for night operation and this is my second light, the first being the Wollar loco depot yard light. I will slowly add lights around the layout. The more that you think about it the more places you realise that you need lights for.
The loco shed will be next but I also have to make three smoke flues that aren't included in the kit. luckily there is a plan in the article on Broken Hill Loco Depot in Byways of Steam 7.
Here is a photo of a smoke flue I received from Alex Nadalini. The actual chimney part has been removed as this shed is being torn down (Orange I believe - Cowra actually, see comment below from James Black). 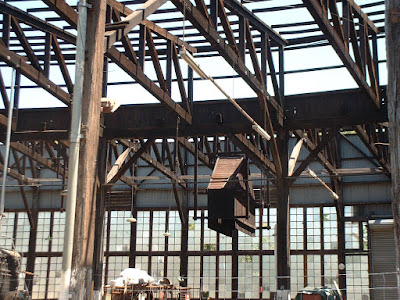