A Welcome to Oz 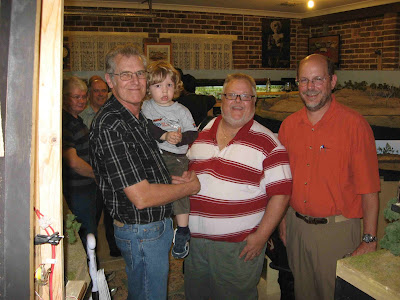 Those that follow these blogs would of course be aware that Blair Koistra (North of Narrabri - http://northofnarrabri.blogspot.com/) and his friend Lance Lassen arrived in Sydney yesterday.


Gary Laker and I met them at Central Station and so began a day of hobby purchases as we drove around Sydney.


We ended up at my place for a welcoming BBQ with a number of friends, Bob Merchant, Bob Stack, Bob Lynch, Graham Saint, Marcus Amman, Terry Flynn and David Allen.


Other friends that couldn't be there as they were away either holidaying or at the Hobsons Bay Exhibition in Victoria were (Ron Cunningham, Ian Dunn and James McInerney).


Some time was spent talking and running a couple of trains, eating and generally having a great time.


Blair and Lance left this morning on a punishing road trip around NSW to photograph various trains being as I understand it, assisted at various times by a number of other contacts here, who I am afraid I do not know.


I am sure that Blair will give a much more detailed report on his blog when he arrives back home and recovers.