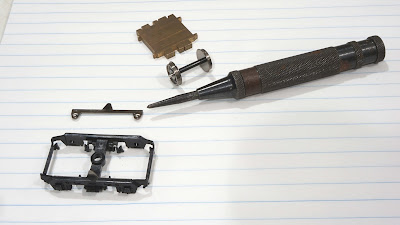 The lesson from all this is not to assume that all track work and points are perfect or even the same and if you are having issues with a variety of rolling stock then have a good look at your track work.
Posted by Ray P at 12:36 PM 2 comments:

I am sitting here writing this post as the sun sets on my first day of retirement.

My last day of course was yesterday and it was a strange day to say the least. Although I knew it was my last day it felt as though I was going on holidays as I cleaned up my email, files and closed off various things I was working on. Over the last 20 or so years I have always had a job with responsibilities for NSW and where I was the only person doing the work and with the knowledge, so it was natural to be preparing for my holidays by bringing the work to a state where I could have a break.

The company has advertised for my replacement and I will go back when the person is appointed and do a handover to bring the person up to speed.

Chris and I had a dinner with a small group of work mates on Wednesday night at a very nice Indian Restaurant in Harris Park called Chutneys. We had a great time with much laughter and good food.

Yesterday was  hard to describe but it was nice to see the number of people who attended the morning tea and who later came to my office to say goodbye and also an emotional thank you to those special friends who were just amazing, they know who they are.

Chris came and picked me up at 5:20pm, I wanted to put in a full working day and why not? I actually finished my last bit of work at 4:25pm and spent the last bit of time talking to one of those special friends.

Chris and I then went to one of our favourite restaurants, Indian again, Murraya, and this time in Miranda, is there a pattern there?

Afterwards at home we watched  the last two episodes of West Wing, we started it about a year ago and watched one or two episodes a week. It was good way to end my retirement with the end of such a great series.

Well, enough of the emotional stuff I will be back to trains shortly now that I have a bit more time, or so I think, we will see what retirement brings.
Posted by Ray P at 6:05 PM 11 comments: 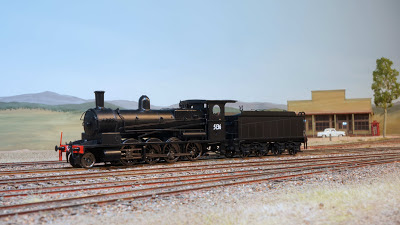 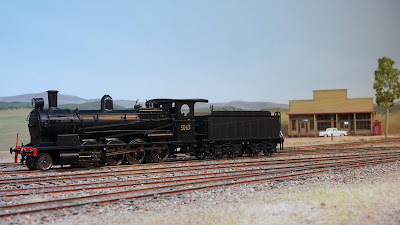 On Sunday morning Rohan Fergusson (Bolivia Blog) dropped by for a look at Bylong and a chat before heading back home to the north. Although Rohan is a diesel man I managed to get him to drive the lead C35 while I drove 5085 the banker on that infamous train which was the subject of the video in the last blog post. This time however I had removed a few wagons and we made it to the top without incident. I might have to put one or two wagons back on it, it seemed a bit too easy. Sorry, no photos, I was busy.
Posted by Ray P at 9:37 PM 4 comments: