A not so new GSV sheep van

I recently noticed that Casula Hobbies had released four axle packs of 10.5mm disc wheels in 23.8, 25.0 and 26.0mm axle lengths which gave me an idea. Spoked 26mm axles are also available and I heard a whisper that spoked 23.8mm axles may be available in the future which would be great for this project and others.
Some years ago I purchased a number of Austrains S trucks so that I could use their removable chassis on my Protype four wheel wagons. In my usual fashion I converted a CV van and stopped there.
Now though I had an idea and bought some 23.8mm axles from Casula Hobbies.
My idea was to try them out under a Camco NSWGR GSV sheep van as the original chassis was made very wide to suit the axle lengths available when first produced.
Now the S truck chassis is wider of course but as it is removable I used a motor tool with a wide (approx. 1mm) stone cutting disc to cut it down its long length through the centre of the chassis. I also filed the edges of the steel weight to fit within the new narrrow chassis.
The two longitudinal ridges on the underside of the GSV floor that represent the inner chassis members of the GSV were clipped off with small transistor side cutters and then filed flat to the rear of the coupler mounts, the mounts were left as is.
The 23.8mm axles were held in place between the S truck chassis pieces and marks were made on the under side of the GSV floor in the four holes at each corner of the S truck chassis.  I attached the S truck chassis to the floor using a small self tapping screw through each of the four holes at each corner of the chassis. The rest of the van was assembled as per the instructions and painted dark grey.
After painting I applied some clear gloss to the number boards and chassis areas where the van numbers were to go. I found that the decals needed a coat of Microscale Liquid Decal Film, a clear liquid that gives an extra coating to hold old or suspect decals together.
I fitted Kadee scale head whisker couplings and followed this with some pastel dry colour weathering and here is the result compared to a GSV built as supplied. 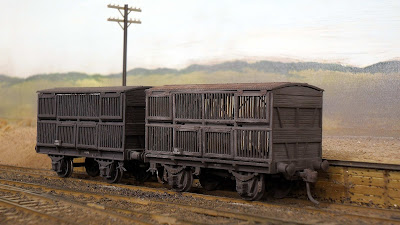 Yes, I know, I will fix the brake handle now that the GSV looks so good.
Posted by Ray P at 11:59 AM No comments: