I have had a request to do the signal box at the Gilmore Station on the Tumut line. I decided to draw it up even though the chances of covering my time would be very slight but I like a challenge occasionally. No I can't do every thing that someone thinks up!

I found that there were very few photos around but I did find two in the Train Hobby NSWR Station series of books. One photo was a view of the end of the signal box from a distance and it appeared that the box was built of 10 inch PC panels so I proceeded to draw it based on that.

Well, just before the latest AMRM magazine was released I discovered another few photos on Rolfe Bozier's web site that showed that it was actually built of 15 inch panels, bummer!

So, in the AMRM News section there was a photo of a computer render I had supplied of the model signal box with the incorrect panels. Back to the computer then and two days later all was done.

Here are a couple of renders of the final signal box. 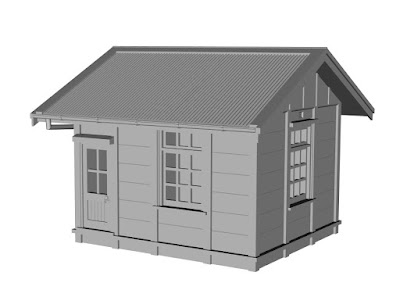 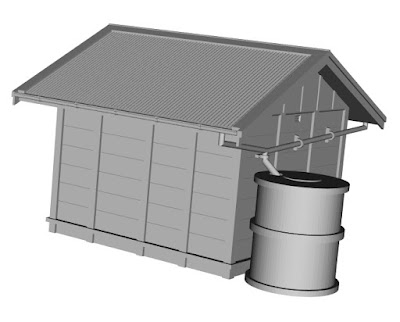 Tom Pall sent me a photo of the Gilmore Signal Box after he saw the render in AMRM and while it shows the 15 inch panels they also look like they have lines at the middle which would be why my distant view made me think it had 10 inch panels. Tom was relieved when I told him I had already discovered and corrected the issue.

The AMRM stated that the HO Gilmore Signal Box was for sale however I haven't made it available as yet as I have been trying to optimise the cost due to the recent increase from Shapeways for the Fine Detail Plastic material. It should be available shortly with several options of materials so that the cost can be worked out to suit (see renders below).

It will also be available complete in Fine Detail Plastic with all details printed in place except for the water tank. The issue here will be with painting the doors, windows etc. in place on the model as against separately on a sprue.

OK, here is the sales pitch! With Casula Hobbies bringing out the HO RTR Z19 Class steam locomotive with the early Baldwin bogie tender then there is no reason not to model the Tumut branch so you will definitely need the Gilmore Signal Box.