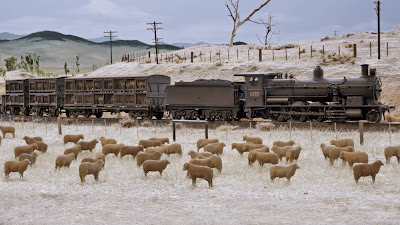 Well, I have slowly been working on the signal box modifications and I am reasonably happy with how it is coming along.

I received my Frosted Ultra Detail signal box door to replace the incorrect one and gave it a soak in some acetone for a couple of minutes to remove the remaining light oil that Shapeways use to remove the wax support material.

Unfortunately, you have no control with Shapeways over how the item is oriented in the 3D printer and this can impact on some surfaces leaving white and very slightly rough areas where the wax support material was attached. These areas can often be smoothed with 'wet and dry' paper or by scrapping with the edge of a hobby knife blade. The orientation may also leave very fine print layer lines and this was the case on the rear of the door. Most of the back of the door didn't matter except for the glass areas. I used a small 3 mm wide chisel blade that I had ground from a small wood carving chisel many years ago to scrape the rear glass smooth. I then gave the glass areas a coat of clear gloss acrylic paint front and back which made it go almost fully clear, clear enough anyway to look right.

I have added the missing small vertical trim pieces on the gable end walls and used some 12mm wide modellers masking tape to mask the windows prior to spraying the Light Stone (it was exactly the right width). 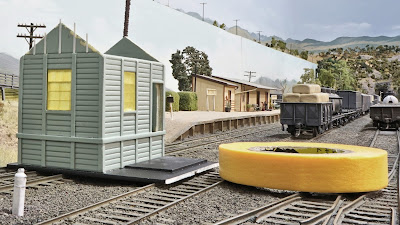 I then added barge boards, fascia boards and gutters as well as spraying the walls Light Stone. I used Humbrol Matt 103 a cream to represent the Light Stone. It is slightly yellow but could be toned down with some weathering. The door was painted white as a bit of research indicated that the signal boxes didn't always seem to follow the usual stone colour schemes and often had very simple schemes. It seemed to be a bit hit and miss. The doors colours varied, sometimes all Dark Stone, sometimes Dark Stone with Mid Stone lower panel and with or without the white window trim. Later signal boxes in the pastel colour era seemed to often have a white door so I decided that this signal box was part way into that simplified scheme era. 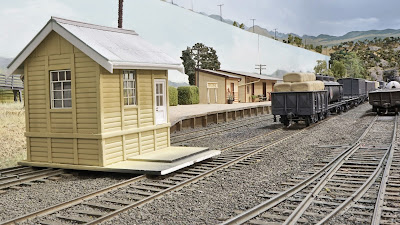 Here is the current state with Dark Stone gutter and trim colour added. I haven't decided if I will do the vertical trim on the gable ends with the Dark Stone or not (veering towards not). Still thinking about adding some Mid Stone on the gable barge boards. 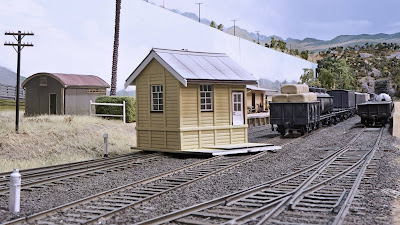 One thing I like about 3D printing is the ability to add small details such as the door handle and the bolt on the signal box door. The door handle is actually a proper knob with a thinner shank behind.

Of course there are the limitations of the 3D printing design minimums to be taken into account when drawing anything up. I should probably mention to anyone thinking about getting into 3D printing to be careful with your design as the various 3D printing companies don't use the same design minimums (usually related to wall and 'wire' thickness minimums). The prices vary considerably as well. To me Shapeways is the cheapest at the moment but there is the orientation trade off and their minimums are smaller so there can be a potential for breakage of very thin parts.

The small platforms outside the door and across the tracks are next on the list to be done.
Posted by Ray P at 12:44 PM 3 comments:

For some time I have been aware that I should have catch points on my layout but after looking at a number of station track plans I am not sure what the rules are for placement. They seem to be protecting sidings onto the main which is obvious (e.g. private sidings, oil/petrol sidings, etc.) and also loops but then not all loops.

Since the station yards are already in place on my layout I have decided to install a few where I have the room for them.

A study of a NSWGR Standard Catch Point plan from 1936 showed that the Peco one was reasonable but not quite right. 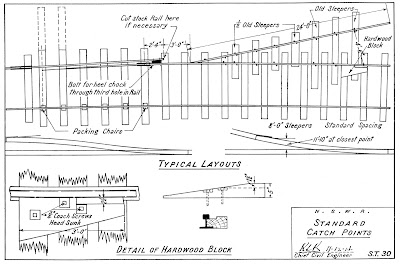 I decided to try to draw up a 1936 catch point for 3D printing. Once again I used Sketchup a free 3D drawing program (there is also a professional version that is about US$500).

Here is a screen view of the resulting 3D model; I have done both a left and right version. The horizontal pieces are two sleeper variations that plug into the two long sleepers at the left hand end and are for mounting the catch point indicator. The small triangular piece is the hardwood block that guides the wheels up and over the rail (see plan above) and it plugs into the sleeper with the small square hole in it.

The catch point has been designed to take code 70 or code 75 rail (as long as I have measured and drawn it correctly). Of course a single point blade will have to be filed up and it would be pivoted on a fish plate. Due to the minimum wall thickness restriction of the 3D printing process for the White Strong and Flexible material the tops of the dog spikes may need to be filed slightly once the rail is in place to clear the flanges (based on flanges to NMRA RP25). Being a nylon the webs between the sleepers may be cut occasionally (every alternate web) to enable a slightly curved catch point to be made.

I haven't had one printed as yet but will probably do so soon as I will need to check that it all works before I make it available on my Signals Branch Shapeways Shop.

One reason for delaying is that I am drawing up a catch point indicator which I would like to make work off the catch point blade. The basic shape has been done but I am a bit stumped at the moment on trying to work out how to get the indicator part to rotate through 90 degrees with only a very small movement from the point blade. I guess if I can't get it to work then I will release a static version.

The indicator will be printed in the Frosted Ultra Detail material, a translucent plastic that can be used to pipe some LED light for the aspects from below the baseboard.

You would think that this would be easy since I have an actual catch point indicator in my layout room, a 50th birthday present from my brother Noel (it came from the Tumut line - he used to live at Adelong). Unfortunately what works on the prototype may not work on a model.

I am not sure how many modellers would be interested in a lit and working catch point indicator but there is nothing like a challenge!