A Suggestion Comes Home to Roost

At the Modelling the Railways of NSW Convention in July I was having lunch in the sun outside the canteen at Loftus TAFE when John Dersch sat down at the table. Now John is the man behind the Uneek range of details. During a pleasant discussion about the convention and his latest model of a soldier atop a WW1 momument, I ventured that a good item to make would be the platform fencing in use on NSW stations as it has one or two 2" x 3" cross beams in each post and is capped with a 4" x 4" top rail. This rail is however placed in a diamond configuration. The problem for the modeller was firstly to notch the post for the middle rail(s) and then put a "V" in the top of the post to take the 4" x 4" top rail and then to repeat this process accurately for all posts. Not a prospect I would look forward to.


Well, John listened politely and with a bit of interest.


At the recent AMRA October Exhibition at Liverpool John saw me as I passed Anton's stand and came out and shook my hand saying he had something for me and thanking me for the good idea. Of course it was a small bag of fence posts cast in white metal. John had just run the first castings on Friday night so they were not for sale yet.


Here are the castings: 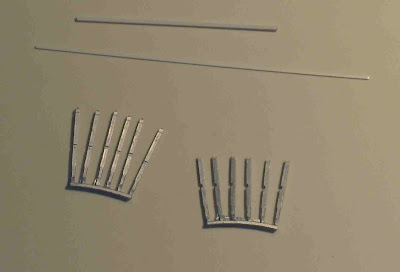 
It will be noted that this is a single mid-rail fence and the DATA SHEETS fence has two mid-rails. A quick check of photographs will show that both existed. Perhaps John may consider the two rail version as well.


Here is the result, not glued as yet and a little up and down. 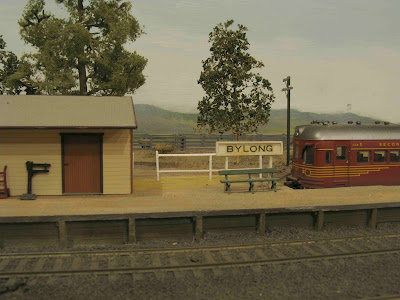