I would just like to express my thanks to those who find my blog of interest. I must say that I quite enjoyed posting in November as the blog and the projects each seemed to drive the output and interest along at a great pace. It couldn't keep up though and I did slow down.
I am taking the break and the first week of January off and hope to accomplish some more. I really should get back to the Cassilis branch terminus and psych myself up to build the last six points (I just checked and I made this promise to myself in a blog post in Christmas 2009 as well!).
I am sure something will eventuate but who knows what? I tend to have a thought about a technique or something interesting to build and away I go, not good at planning and sticking to it.
Anyway, I hope you all have a safe and happy holiday season. 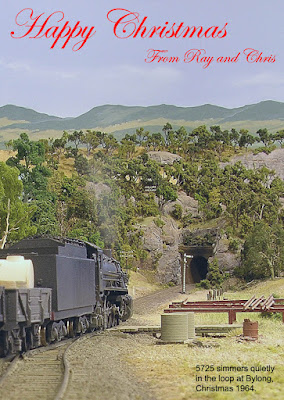 Back again with another little project

After my previous months flurry of posts I ran out of steam however I was off again when I heard that the Model Railroad Craftsman had received the first QSI Titan sound decoders. Now, those that know me realise that I like to experiment and try new things so off to Blacktown and $135 later I had a Heavy Steam Titan in my hands.
Now, what to do with it? You would think that I would already have a plan after waiting for it to turn up for so long but no. The Titan comes in several versions with different sound sets that can be changed so the Heavy Steam version wasn't a problem as I had a QSI Programmer and the accompanying software and could change it if necessary.
After due consideration I opened the storage draw under the lower staging yard and decided on my NSWGR D57 class so the Heavy Steam sound set was fine after all.
There is a story about this particular model that I would like to tell.
In 1973 in the first year of Chris' and my marriage we were living in a flat at Cronulla and desperate to get a block of land I approached Neil Cram who I had built a NSWGR 25 class 2-6-0 locomotive for and worked out a deal. He assisted us with money for a deposit on our land at Helensburgh and I would  build him the equivalent in locomotives (no actual number was discussed we would work it out along the way). The first loco of the deal was a 57 class that Neil had some brass etchings made up for consisting of the tender, cab and smokebox. Along with the etchings was a 4-10-2 chassis from a brass loco to be used as the basis for the 57. Anyway after a lot of work on a small desk with a Unimat lathe that could be converted to a milling machine the 57 resulted.
About 6 years ago I was in Tom's Hobbies at West Ryde when I noticed something in the second hand display case that was very familiar. Along with it were several other locos I recognised and I guess Neil was cleaning up his collection, a lot of better model locos having been produced down the years. I couldn't afford them all so I bought the 57.
Now to the present, the Titan comes with two speakers as it has stereo output so that you can get sound from the appropriate areas of a loco. The two speakers being 28mm diameter were too large for what I wanted to do so I bought a 18mm and a 13mm speaker and enclosures. The idea was to put the 18mm one down the boiler as far as possible for the chuff and compressor then to put the 13mm one in the cab for whistle, generator, blower, injectors, etc. The QSI CV Manager software has sliders for each sound so that any sound can be directed to either speaker or balanced somewhere between. The speakers placement was accomplished relatively quickly but I had to put the Titan above the motor and sticking into the cab a bit, thanks goodness for the large boiler made from rolled brass (that was fun to make way back when). I couldn't put the decoder in the tender as I has soldered it all up, no way in and the floor was milled from a piece of brass.
Using the QSI Programmer and the accompanying CV Manager software I proceeded to choose from the available sounds to produce what I felt a 57 sounded like based on a DVD I have with 5711 chuffing away. The Titan has a number of different chuffs, many whistles including the Eureka 38, 60 and Austrains 35, different compressors and generators to choose from. The whole sound scheme can have the overall pitch adjusted (bass to treble range) and the chuff has another pitch adjustment as well. Of course with small speakers some of the bass is not really available. I would love to hear the Titan on some larger speakers. I was also able to nominate 6 chuffs per wheel revolution. There are many other adjustments available that I won't go into but do investigate. I should mention that it allows a 'User sound' to be loaded in and this sound can be looped if necessary, I am not sure what you can do with that though, perhaps a more suitable compressor as it is a simpler sound than a whistle for instance. A whistle could be done but it would always have the same length and couldn't be looped as a whistle has a start, a middle and an end that have to dealt with separately to extend the whistle sound.
Anyway, enough talk, here is another rough video of the 57 in action on Bylong.