As you have probably noticed things have been a little slow on this blog of late. I think it has something to do with winter and that it can get cold in the garage. Now, that's not the whole truth as I can turn on the air conditioner to fix that. I some how manage to fall into a creative hole occasionally and this has been one of those times.
Saturday Night
About two weeks ago I got an email from Andrew Campbell of Bowen Creek fame asking if he and Ian Millard (Liverpool Range) could drop by on the Saturday night of the Epping Exhibition weekend to see Bylong. Note that I related the weekend to a model railway exhibition and not the Queen's Birthday, must say something about me I think?
Anyway I agreed and they turned up at 7:30pm on Saturday night having spent the day at the exhibition. I had only met Andrew for a few minutes at last year's Epping exhibition when he and Ian exhibited Bowen Creek and had not met Ian at all.
After the introductions to Chris and my 3 year old grandson Cameron we moved into the garage (yes, I did have the air con on). I then talked them through the railway from the lower Muswellbrook staging through the first tunnel to Kerrabee loop and station then across the Goulburn River into the second tunnel, up the 1 in 40 grade to Bylong then the third tunnel to the 1 in 80 of Cox's Gap loop, then more1 in 40 around the tear drop, past the junction to the coal mine, across the Wollar level crossing, through Wollar, past the Cassilis Branch junction then up the final 1 in 40 to the upper staging at Gulgong.
After this introduction I suggested that they should take a goods from Muswellbrook to Gulgong and of course in keeping with one of the main operational reasons for the layout, the train needed to be banked from the rear. Andrew volunteered to drive the banker with Ian on the head.
After a quick introduction to the NCE radio Pro Cab throttles Andrew took 5085 from Wollar loco and descended all the way down grade to Kerrabee where he moved to a short siding off the Muswellbrook end of the loop. Ian then selected 3532 on the goods in Muswellbrook staging and slowly proceeded to the Kerrabee loop. Andrew moved 5085 up to the MHG and gave a long, short and another long whistle which Ian responded to with a long whistle and the throttles were carefully opened up as the train began it's journey.
After crossing the Goulburn River bridge and passing through the tunnel, the 1 in 40 grade began with an easy climb to Bylong. They drove on slowly through the Bylong tunnel and through Cox's Gap loop until they were about 3/4 of the way around the tear drop when they slipped to a stop. It seemed that the extra two wagons I added to the train that afternoon were too much (one was a Protype white metal CV!). I suggested that they back down to Cox's Gap loop and then make a faster run at the grade. This was tricky as they didn't have a very long run before the 1 in 40 'S' curve at the start of the tear drop, however with a little bit of wheel slipping they managed to top the grade, whistling for the level crossing at Wollar as they moved into the station.
Realising that they would not make the final grade to the Gulgong staging I suggested that we cut in a C32 which I would drive. Once the 3390 was in train, whistles were exchanged and three separately driven locos took the train up the grade and into the staging. As the train crested the grade Andrew driving 5085 dropped away from the train and coasted to a stop then drifted back into Wollar. He then put 5085 away in the loco depot after dropping the ash, coaling and taking water.
This was the first time that three locos had been used this way on Bylong and I enjoyed taking part, it felt like the real thing as we battled to lift the train up the grade and the feeling of accomplishment when we crested the hill was very real.

In this picture I recreated the last climb this morning by backing the train down from the staging so that you can 'see' the action. I have calculated that the train would have been 590 tons with the RUs and BWH being empty and all other wagons loaded. The load allowed for a C35 + C32 on 1 in 40 grades is 480 tons and a D50 can haul 295 tons on a 1 in 40 grade giving a total capability of 775 tons so this load was certainly prototypically correct. Please note that I weight my wagons to 2 grams / foot which gives these prototypical hauling capabilities (not counitng the Protype CVs of course).
I can only say that we had a very enjoyable time running the layout and discussing all those current topics doing the rounds of the hobby at the moment. After a top night I feel that my circle of hobby friends has just expanded and the offers of visits to Port Macquarie that were extended to Chris and myself were truly appreciated.
Sunday Morning at the Brickpit - Epping Exhibition
I went to the exhibition on the Sunday morning for a couple of hours and found a well lit spacious exhibition with a nice range of layouts and commercial stands. I won't say too much more as a number of attendees have already done so on the web with their reports but I will add a few photos.
Those who know me must have been more than a bit surprised when I proceeded to photograph various scenes on the layouts using my mobile phone. I find that exhibitions are not very good for model photography ( the trains are moving) so I had left my camera in the car. I started to go back for it when I saw Geoff Knott's latest On3 timber layout but decided to see what my phone could do.
Here are a few pics, sorry, no trains. 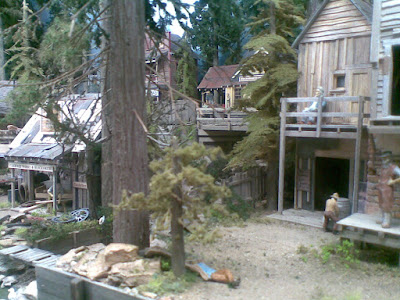 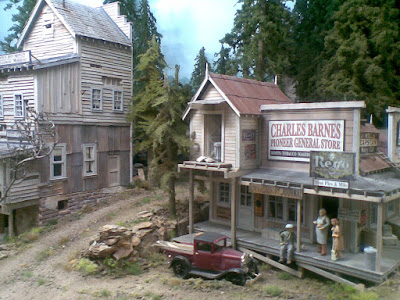 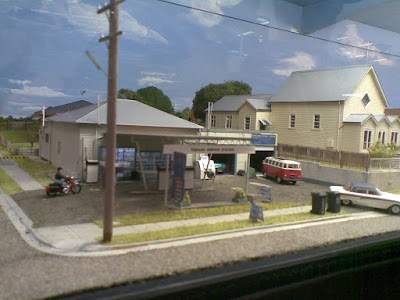 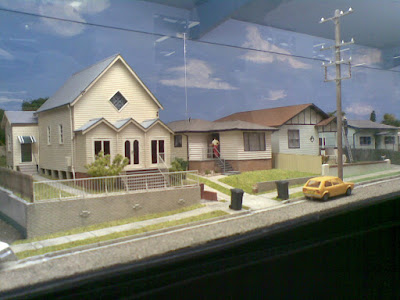 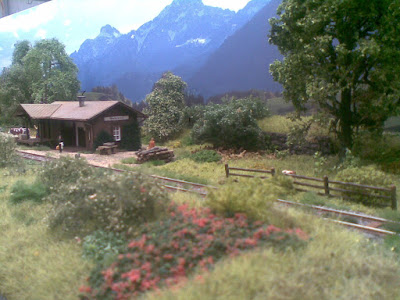 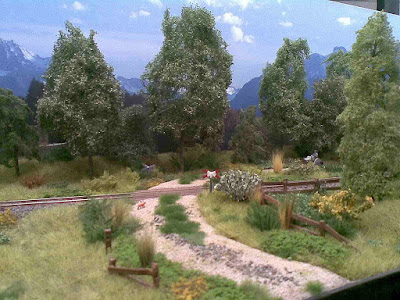 A Bavarian layout - nice scenery
Sunday Afternoon
I left the exhibition at 1:15pm and drove to Bob Stack's place for my first look at his South Coast Rail layout. I have been looking forward to this as I believe Bob is one of our finest scenery experts specialising in Illawarra escarpement / Blue Mountains style of scenery. Bob uses many different products both commercial and natural to produce the vegetation that grows profusely over the cliffs and hills of his layout. 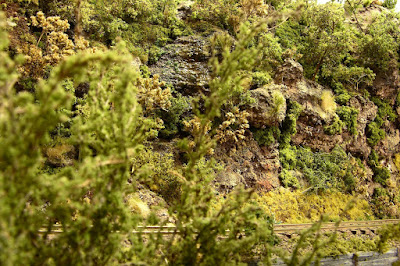 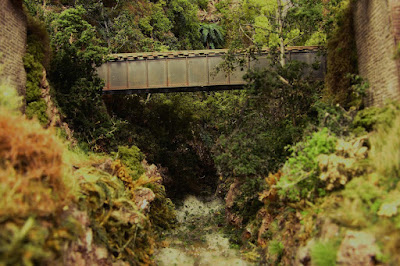 Bob's gorge (see his blog for a more complete photo)
Bob explained to me how he does his sandstone rocks and cliffs and I don't think I have seen his method in any magazine in all the time I have been in the hobby (since 1966).
Bob uses an almost dry plaster mixture (I am thinking pie pastry before cooking - ask your wife, girlfriend or mum) over a chicken wire former and he includes pieces of white expanded polystyrene foam which he covers with the mixture for outcropings. He then puts a basic wash of brown oxide over the rocks and I am sure he does some carving, texturing and shaping as well. When dry he then uses matt hobby paints and dry colours to add the myriad colours that are present in a sandstone cliff face (just have a close look next time you are in the bush).
Bob was very free with his information but I am not sure that I could reproduce the quality of his work. Those who are attending the Modelling the Railways of NSW Convention in July will have the chance to see Bob talk about his scenery methods.
I left late in the afternoon heading south across Sydney thinking what a real gentleman Bob is.
All in all, a great weekend, batteries charged, now to get back into the garage.
Posted by Ray P at 11:11 PM 7 comments: