I ordered a 'Cheap' Signal Box for my layout and also as an example for showing modellers when I have the opportunity.

This signal box was printed in Frosted Ultra Detail to see how the finish would look. As the box is made up of parallel boards and has corrugated iron on the roof at a slope I think that this gave the printers a challenge as there are fine print lines inside the box and on the rear wall at about 45 degrees. I suspect if the box was printed as it stands in the landscape then there may be print lines visible in the corrugated iron but this is not the case due I guess to the 45 degree print orientation.

I found that unusually the Frosted Ultra Detail had a slightly rough surface which I think was due to the waxy support material that is used in the printing process to support the 45 degree angle when printed. I cleaned the box in acetone then painted it without any attempt to remove the roughness to see what it would look like. It didn't look too good so I then scrapped the surface with the flat edge of a jewellers screw driver which reduced the roughness. I think that a bit of judicious smoothing with some fine wet and dry paper would also be beneficial.

Here are a couple of photos that show the roughness prior to the scraping.


Here are a couple of photos of the box sitting on the Bylong platform just next to the dock. It does fit very nicely there but I don't think that it would be big enough to handle the signalling that I have planned for Bylong. 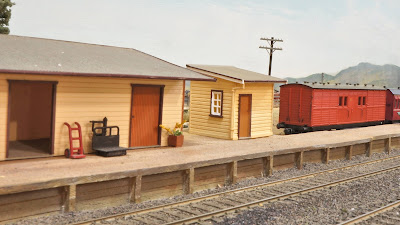 The signal box will be placed at the junction to the colliery at the top of the grade up to Wollar. As the box is a platform level one I will have to make a closed in supporting structure for it as it will sit on a small embankment. As most similar boxes seemed to have corrugated iron around the supports this is what I will do.

And here is the Standard Signal Box (in White Strong and Flexible material) temporarily in place on Bylong platform (checking for fit).

Now I can see that I will have to get back to drawing up the various bell cranks and compensating links to go with my point rodding A Frames on my Shapeways Signals Branch shop.