I had an idea a week ago so obtained a pair of Eureka Models 3AF Bogies. These are available from Eureka Models and they are the 6 wheel bogies from the Eureka Models 72'6" passenger car range.

I thought that these would be much better under the Lima 72'6" carriages as the Lima cars do not track too well due to the lack of vertical play in the centre axle. I have for years run these bogies without the centre axle to try to overcome this issue. As a case in point I was running a pair of the Lima cars and the same bogie on the same car came off in a number of places on the layout where others don't derail. I feel that the bogie may be a bit warped or that the wheels were hitting the Kadee coupler box..

So after several designs and 3D prints on my filament printer to get the dimensions right I had working bogie centres mounted on the offending carriage.

After this I realised that I could do much the same and design a Kadee coupler mount for the ends on the carriage.

The coupler mount took 6 designs mainly working out the correct height for the coupler.

Please note that the Eureka Models 3AF bogie has the mounting hole offset towards the front of the bogie, this is to reduce the possibility of the wheels hitting the Kade coupler box. As anyone knows who has done this with the Lima bogie it certainly restricts the swing of the bogie. The Eureka bogie improves this issue greatly.

The small raised walls of the existing Lima car bogie mounts need to be removed down to the large smooth surface (see photo). This is easily achieved with a pair of transistor nippers which are like side cutters but they a flat on one side of the jaws. After removing as much of the short walls as possible then use a hand motor tool or file to smooth off the remaining pad. Only the front portion of the pad needs to be nice and smooth as the new mounting will sit partially on this.

There two small die ejection pin marks that are in the corners of the carriage at the rear of the buffer beam, these need to be smoothed down to the rest of the surface so that the new coupler mount will sit flush.

The bottom edge of the carriage buffer beam needs to be filed a little to allow the Kadee coupler to sit at the right height. This is achieved by holding the 3D printed coupler mount in place behind the buffer beam and filing the buffer beam down to the level of the coupler mounting pad. A sharp hobby knife could also be used to shave away the 0.5 mm or so of plastic.

Both mountings can be glued in place with ACC Super Glue if you wish but I have found that it isn't really necessary as the screw will hold them in place securely.

The mounts can be found on my Signals Branch Shapeways shop here:

Single set of both mounts for one carriage.

I will be at the AMRA Exhibition this coming Sunday 30-9-2018 on Keiran Ryan's Modelling Clinic stand so drop by and say hello.

I installed three small station signs on the Aberdeen Station building that was the subject of a recent post. The signs are mounted with a 1 mm peg on the rear of the sign. I used a 1.1 mm drill bit after using a scriber to make a small drill centre indent in the plastic brick cladding as a 1 mm hole was too tight.

These signs were white with black as a background to the white lettering. I achieved this by using black paint over the white then carefully scraping away any black paint that got onto the face of the lettering. 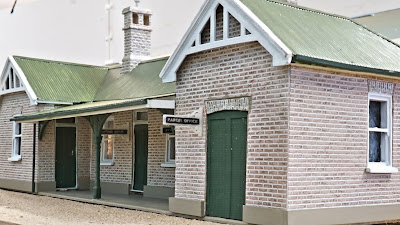 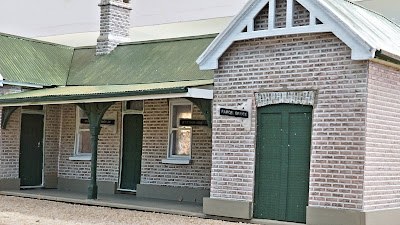 The signs are WAITING ROOM, STATION MASTER and PARCEL OFFICE.

I am very happy with the signs and really must get back to the Werris creek Station building. My next mission is to do something about the brick platform edges, I could use the Slaters brick sheet but that would mean a visible join every so often, not easy to disguise.

I have had a thought about photo-shopping some of the brick platform edge that appears in some photos of Werris Creek Station that I have but due to shadows, etc it might not be too good. More thinking required, I am good at that! Don't we all do it when there is something that we are stuck on and don't know how to make a start?