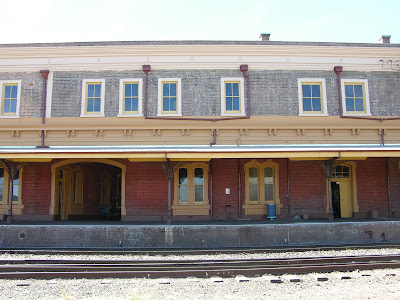 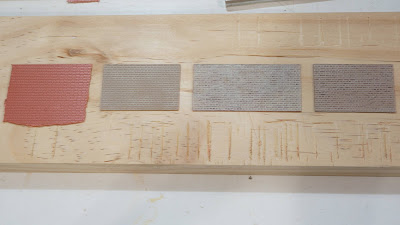 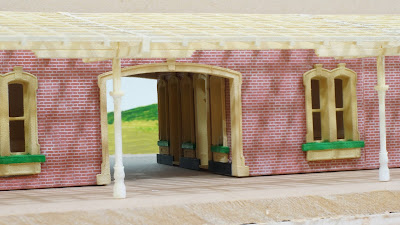 On my Signals Branch blog I have just added a link to a PDF file that outlines which Signal Arm and Detail Part Sets to use with particular signal posts.

I have just had someone (unfortunately unknown) order a Triple Bracket Post signal with the arm and detail set for an Inverted (underslung) Bracket Post and this will leave the modeller short by one cast iron support for one side of the bracket.

Of course it may be someone who has previously ordered the double set of bracket detail parts and as such has the necessary parts.

However this did raise a question of how does someone with only a little knowledge of signalling work out what to order.

Here is the document Matching Signal Posts to Signal Arms and Detail Sets.

The document  advises that the modeller refers to the NSW Track and Signal Diagrams CDROM available from the ARHS NSW online bookshop.

If you want to order signals from my Signals Branch Shapeways Shop and you would like someone to paint and assemble the signals then Dale Richards has indicated that he will assemble them, for a price of course.

Dale also makes his own signals using brass etches and tubing for round posts so he would be glad to speak to you regarding these as well.

Shapeways Shops Now Show the Price in Your Currency Recently Shapeways made a change to the way that the price is shown.

Previously the prices on the Signals Branch Shop were shown in US Dollars but the price is now shown in the currency of the country that you come from so Australians will see the price in Australian Dollars.

Shapeways still operates in US$ behind the scenes so the price is set in US$. A by product of this is that the exchange rate causes the price to look like an odd amount.

A day at the Modelling the Railways of NSW Convention

I had an enjoyable day at the convention yesterday as always. Having been involved in running the convention for the first 22 years I can appreciate the work that goes into the day to make it successful so I congratulate the small group responsible. The fact that they are all friends adds to the feeling of camaraderie. I had been looking forward to the day, met many other modellers and had enjoyable conversations.

The talks were of a good standard with a lot of useful information, I particularly enjoyed Dale Richards presentation on Shunting Signals, as well as Garry Glazebrook's talk about his new Newcastle to Fassifern layout. His layout is a huge undertaking with Newcastle Station, Port Waratah, the BHP steelworks, Broadmeadow, Kotara, Fassifern and Newdell Mine all in a 9 metre by 7.3 metre shed at his new home in the Southern Highlands (yes, it apparently is well insulated). Unfortunately I managed to miss the talk on the old Liverpool Station as I was too busy socialising but then catching up with people is one of the real enjoyments of the day.

The commercials were well represented with Casula Hobbies, Pallas Hobbies, Shrike Models, Bergs Hobbies, AMRM, Hobbyland from Hornsby ( IDR Castings), Eureka Models and SDS Models. I came away with a SDS Models Bitumen Tank Wagon pack and will definitely be ordering a Shrike Models C30T (un-numbered drumhead smokebox with six wheel tender) after seeing the two engineering samples on display. Keiran and Tim Ryan had a clinic showing the construction of their range of wheat silos. I apologise if I missed out anyone.

The display layout was Waterfall by the Illawarra Model Railway Club, a lovely piece of work. I managed to take a few time exposure photos in between the parade of typical Illawarra trains of the 1950s to 1960s period.

Here are the photos and those who know the layout will notice that the colour has been de-saturated. I believe that the layout colours are too strong, particularly the yellow of the station and railway buildings on the hill. I used to chase trains down the Illawarra in the late 1960's with my brother so I remember the building colour (I hope). Anyway a bit of 'artistic' licence I suppose and I like them this way. I have also used the existing foreground and backscene sky to remove the front edge of the layout in places and to extend the sky.

Now just imagine that it is 1959, you have just got off the railmotor from Sutherland, have climbed the stairs and are walking northwards along the old Princes Highway just outside of the railway fence to photograph that D57 before it leaves, enjoy. 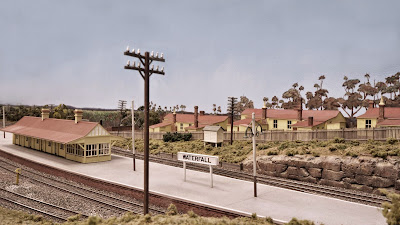 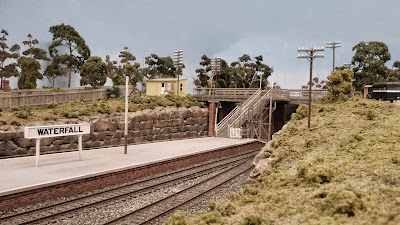 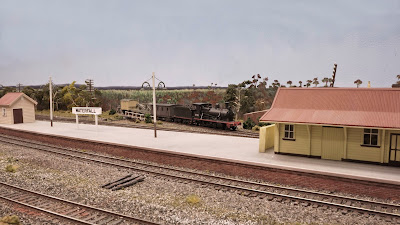 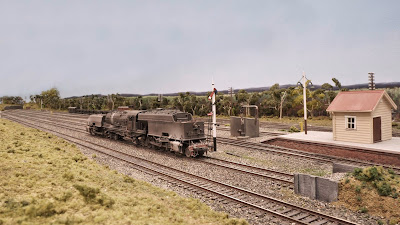 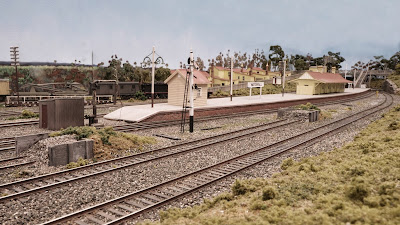 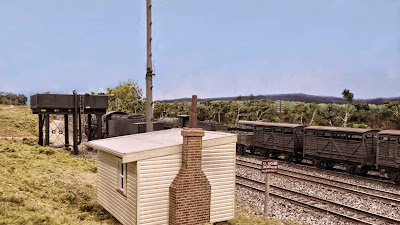 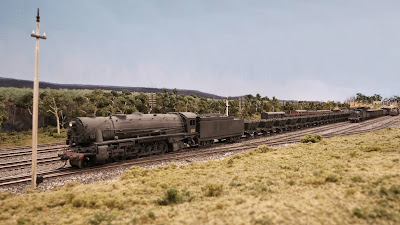 After the convention Phil Badger visited my Bylong layout for a quick look as he hadn't seen it 'in the flesh' so to speak. I enjoyed Phil's visit and we had good conversation on modelling aspects such as 3D printing, layout design, scenery, etc.

My Bit of Modelling Distraction

I have started to do some modelling again and I have been working on the Werris Creek Station building discussed in previous posts. The trial 3D prints of some doors and windows from Shapeways in the Frosted Ultra Detail material were very nice but the cost for all of the doors and windows exceeded $500 so a decision was made to do them in the lower cost White Strong and Flexible material at just over $200. The downside was that the detail level and finish is not as good but when the building will be viewed from the layout edge it will be fine. Also most of the fancy doors and windows are under the awnings.

I think that if I can keep focussed I will be able to finish it in a couple of weeks. I have had some more 3D printing done for the very large 'mouldings' that run along the length of the building at the top of the ground level and another 'moulding' above the second level just below the brick 'parapet' (see following photo of station). Other items printed are as shown below. 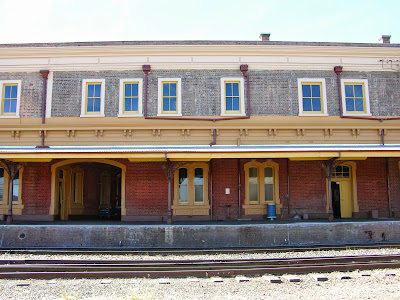 Here are some images of the mouldings and other pieces from Sketchup the 3d modelling program I am using.

So, for the moment, I hope you can put together all the above pieces and imagine what the model building will look like.

But to give you a little help here are a few photos of the building with some of the bits in place but not glued or fully painted as yet.


If you look at the upper level you will notice that it was built in common bricks, an interesting challenge to reproduce, more in the next post. 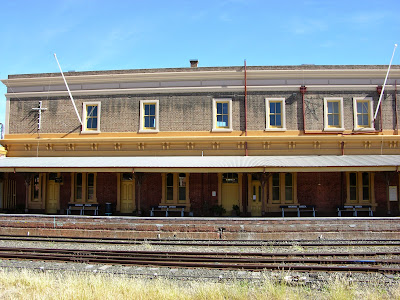 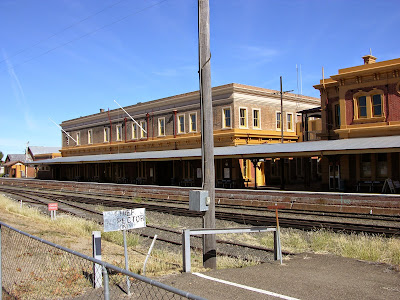 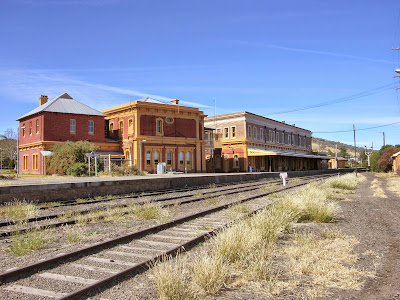