More 3D Printing and a Bit of Video Fun

Today my wife Chris and I finished painting a second bedroom for our two grandsons (7 and almost 5) who have come to live with us with their mother, our first daughter. Their father has decided that he on longer wants to be married and we have been dealing with this since the start of March. This is the reason for the scarcity of blog posts.

Anyway, on with the post but a bit of a story first.

I have been working on a couple of 48 class diesels which started life as Trax 48s but which now have some 3D printed chassis. This is a rebuild along the same lines as the article I did in the April 2001 issue of the Australian Model Railway Magazine (no. 227). In the article I had used layered printed circuit board for a chassis and some Austrains 421 bogies that were purchased at the time (sold as spares).

Now time moves on and my recent foray into 3d printing headed me into the realm of chassis construction. The chassis are printed in steel, yes steel, actually 70% stainless steel with 30% bronze.

How do they do that you say?

Well, a fine layer of stainless steel powder is laid down and resin is printed onto it followed by some heat I think to set the resin then another layer of powder and resin, etc. until the item is finished. At this stage the item is very fragile and it then has bronze infused into it, presumably in a molten state which burns out the resin replacing it in the process.

I had them printed by Shapeways the same company as the Werris Creek station building windows and doors of the last post and I chose a matt black finish which was more of a dark brown as it would save me painting them.

The finish is slightly rough, perhaps like about a 150 grade wet and dry paper. Because of the finish the socket for the half ball pivot on the bogies needed to be cleaned up which I did by using a new drill larger than the hole and by twisting it by hand. The result was a small chamfered edge on the lip of the hole that I had worked out that the ball would sit nicely in.

Unfortunately I didn't take any photos of the chassis before installing them into the two 48 class locomotives. I did take a chassis along to the Modelling the Railways of NSW Convention a few weeks ago and showed them to Keiran Ryan and Phil Badger. They were both very interested.

One slight downside is that the chassis were not cheap being US$51.92 each but they certainly save a lot of work.

Here is a screen shot of the chassis as a 3D model which was designed to use the fuel tank cut from the Trax chassis but including the part of the chassis above the tank. That Trax metal is horrible stuff to cut. 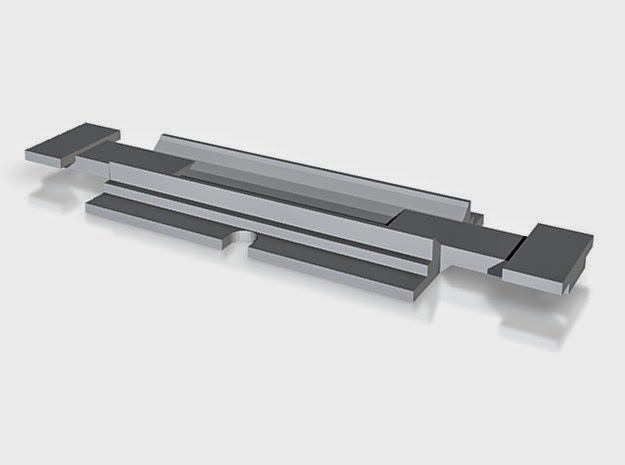 I have since done a second version so that I could use a couple of 48 class fuel tank castings I had purchased from Kerroby which appear to have been cut away from the Trax chassis.

You see I still have two more 48s to add to the roster.

This chassis with the extra block in the centre costs more at US$65.79. it might have been cheaper to cut the fuel tanks off the old Trax chassis but I had purchased the Kerroby fuel tanks several years ago and thought I may as well use them.

These 48s will  be detailed up when I get my two Trainorama 48s, hopefully late this year (or early next year - no I don't know anything about delivery dates).

Anyway back to the video fun, here is a short video I took of the two 48s on an Up Goods dropping down grade between Wollar and Bylong. The sound is actually from the locos which have Soundtraxx Tsunami Alco 250 v12 decoders but I have enhanced it with an equaliser in my video program. I think it sounds pretty good, pity we can't get big speakers into our locos. The 48s only have 13mm speakers as they are the only ones I could fit and also to give a 'smaller' sound to sound more like the 6 cylinder diesel the 48s had.