A couple of days ago I decided that I should finish the scenery on the recently added outer teardrop section of the layout so after some thought I took myself off to Bunnings to get a can of expanding foam. The reason for this was that I had a plaster shell of the old scenery near the road bridge that was unsupported by the new fascia which was now about 150mm away. I thought that filling it with foam would be the way to go. I squirted the foam underneath the over hanging plaster shell and continued to do so until it was filled, I then put some blocks of expanded polystyrene between the expanding foam and the fascia, mistake!

I didn't find the problem until after I came back to the layout after some lunch.

Here is the result: 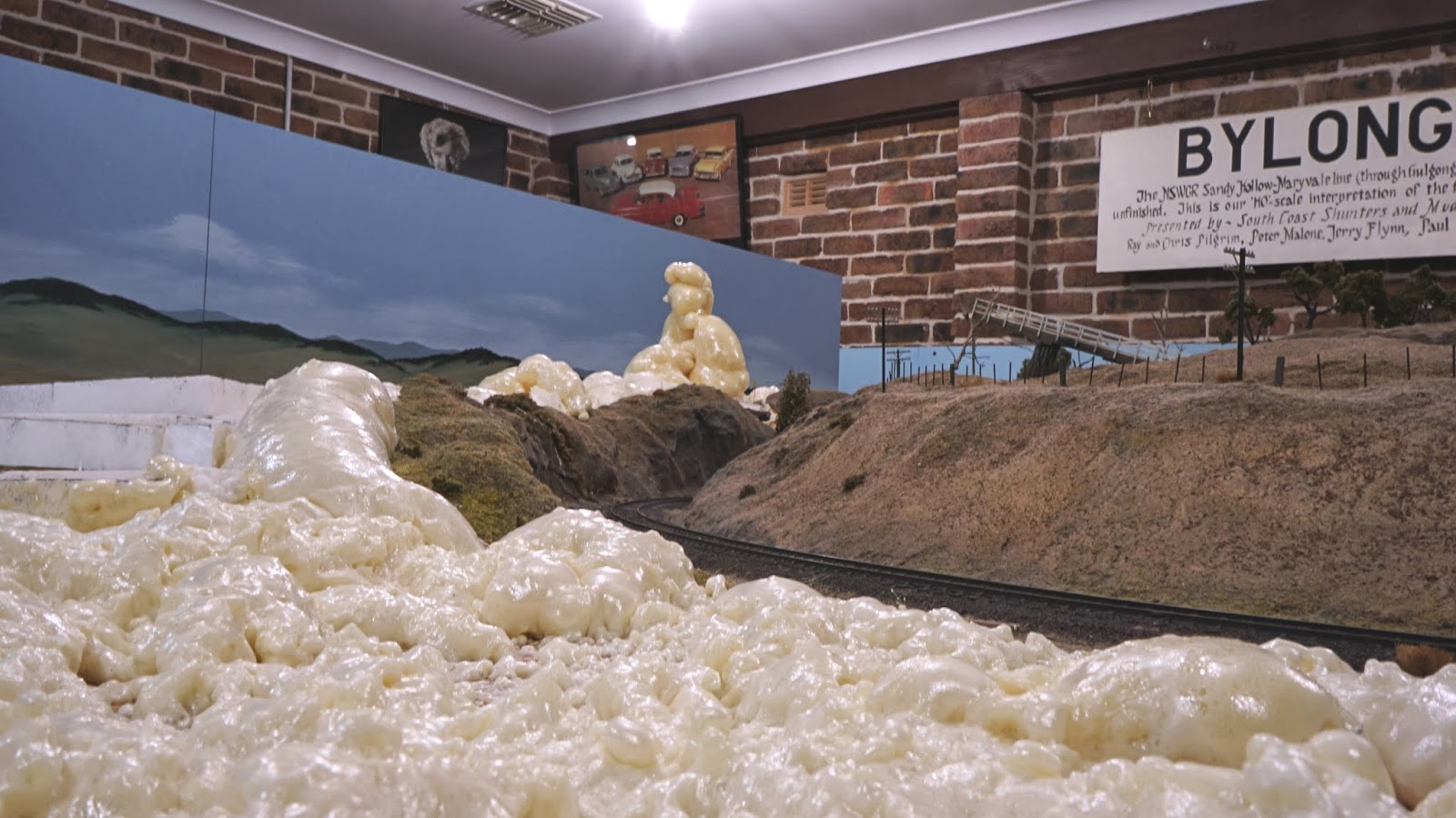 I cut the eruption off and found that there was still gooey foam being extruded from the centre. This is still coming out 24 hours later as I write this but only a small amount now, about the size of a playing marble.

When the foam expanded it broke the plaster shell away from the baseboard below the road overbridge causing the bridge to warp and be on a grade as well.

Now I had to remove the bridge and repair it, luckily it isn't the Laser Rail Bits bridge that I am working on just an old RIX plastic one made to look NSWGR.

I had also tried to apply the foam onto the MDF base to try to get a thin layer but this was not successful as it didn't want to stick and just rolled off when I tried to spread it with a spatula.

Here is the result, not very useful:

I also used some expanded polystyrene at the Wollar township end of the new scenery which is pictured here: 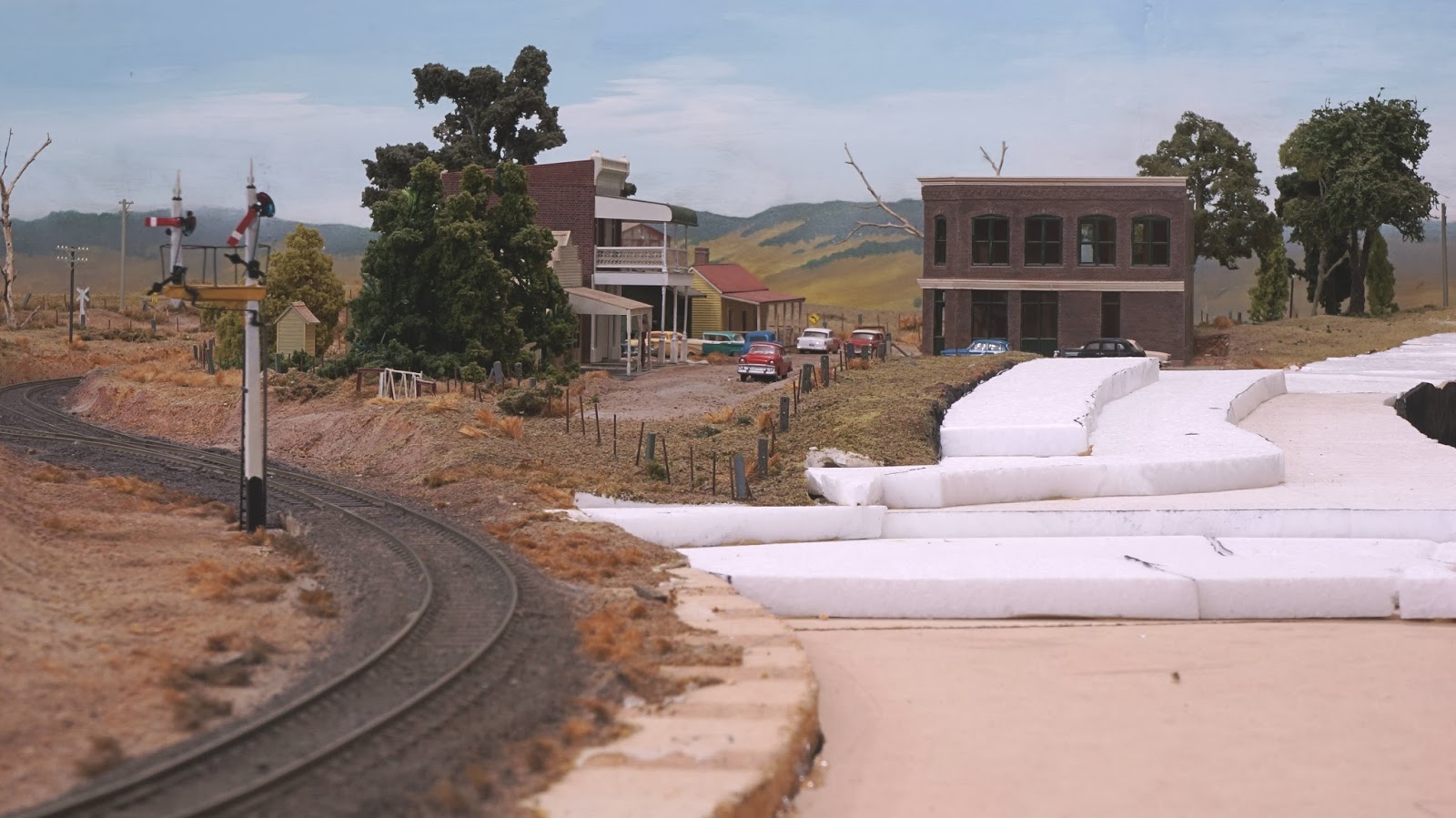 One good thing I can report is that the expanding foam cuts with my hot wire tool, slower than expanded polystyrene though.

Once I got everything sorted and the foam trimmed to shape I painted some PVA glue onto the foam and applied some kitchen wipes of the blue and white checked variety (cheap from Super Cheap Auto). I applied PVA glue wherever the pieces of  kitchen wipe were laid over each other and also where the wipes bridged a gap between the foam.

The intention of using the foam and kitchen wipes with the PVA is to make a scenery landform that can take fence posts and the fine intermediate droppers easily. I use fine wire pushed into the scenery to represent the droppers that are tied onto the wires to keep them apart and from sagging, probably also to stop stock from stepping through the wires.

Part of the new scenery is only about 5-6mm thick and since the expanding foam idea didn't work I realised that I would have to fill this large area with plaster. The problem with this is of course that it would require holes to be drilled into the plaster for the fence posts and the droppers, not a nice job, I have done it before.

The solution to the problem was to glue 25mm wide x 125mm long pieces of 6.5mm balsa where the fence would go. The plaster will be used to fill to the top edge of the balsa and I can easily push the fine droppers into the balsa, posts will be drilled and glued.

Here is a photo of the work so far: