After nearly a week of cortisone eye drops every two hours (except for sleep time) my vison cleared. I am now taking the eye drops four times a day for a month. It is a very scary thing when confronted with something that could have a real impact on the hobby and modelling.

After my vision improved I was able to do some modelling and managed to build two Uneek 5 tonne jib cranes for Bylong and Cassilis goods yards. The Bylong crane will have to be removeable for a while as it will be too interesting for my 3 year old grandson who likes the trains. He was visiting recently and while I wasn't looking he decided that the arm on the Bylong Home signal near the tunnel should point towards the tracks. He got a stern talking to and after a minute of quiet upset on his part I spoke to him softly and we got on with running the trains.

Since Bylong hadn't been run for a while I decided to give the track its six monthly clean with a track rubber. Well, I have to say that the latest Peco track rubber is rubbish. A hard old small piece of Peco track rubber will clean rail with about one third of the effort of the new version. The rubber seems to have very little abrasive in it even though it does twinkle like it has. I am going to see what else is available on the market including visiting a real stationary store looking for some ink rubbers. Many years ago I had a box of a dozen or so pale green abrasive ink rubbers and they were great. I wonder if they still exist in this modern age?

I found a bit of time to put together an IDR Castings MLV kit and it went together very well. This model gave me an opportunity to use the handrail jig from Keiran Ryan Models that I bought several years ago. All I can say is well done Keiran, a very useful tool. The MLV had many brake pipes and handrails to be accurately bent and the jig just made it so easy.
Posted by Ray P at 6:24 PM 4 comments:

I spoke too soon, the photos of the ballasted trackwork in the last post were before the application of the waterbased glue. After taking the photos and doing the post I went back and applied the glue as I normally do, confident that I had beaten the baseboard swelling issue.

By now you will realise that I was wrong. When I checked on it the next morning the swelling and roller coaster track was back in all its glory and even more so. It was worse than the first time so much so that I didn't take a photo.

I thought for a while that I would have to rip up all trackwork platforms, buildings and scenery to replace the actual baseboards. The baseboards have been in the layout since about the mid-1980's and obviously were not good pineboard, not enough resin you would suppose. I have other parts of the layout that are older and the pineboard is still as sound as the day it was built.

I decided that I would give it one more go but this time it would be a waterless process. I carefully removed the track without damage, luckily, and then used the Bosch Multifunction tool to level out the baseboard again. 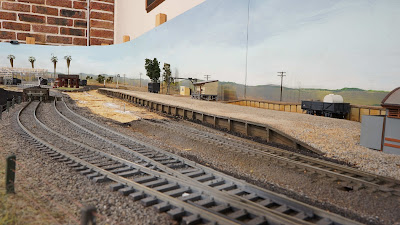 I gave the baseboard two coats of model airplane dope that I had bought some years ago to shrink tissue paper tarps onto wagons but didn't ever use. I then made a paper template of the area, transferred the shape onto 3mm MDF board and cut the shape out on my bandsaw. The MDF was also coated with the dope on edges and both sides. The MDF was glued down with Bostik Zero Nails and also pinned in place. The rough edge of the MDF gives the illusion that it is not flat. 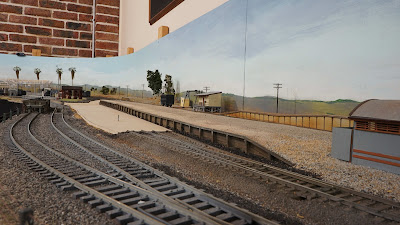 The track was then spiked in place and the wiring redone after the holes were drilled through their original holes underneath the baseboard. There is a slight rise in tracks at the middle of the platform and this is due to the join of the two baseboards not being in the same plane, that is, not flat in respect of each other. 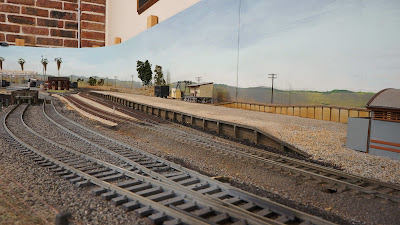 Finally came the nervous step of ballasting. This time though it was going to be waterless and I used an unconventional bonding medium, liquid hairspray. Now, many years ago I helped my daughter buy a small hairdressing salon and in the existing stocks was a  2 litre container of hairspray that could be used in a pump spray bottle. I did a trial and it worked well, so away I went. The next morning all was well as can be seen by the following two photos. Well, apart from the 'nice' cheap flowery smell! It's gone now. I will have to ask my daughter if the liquid hairspray is still available. 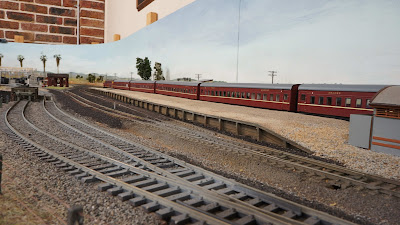 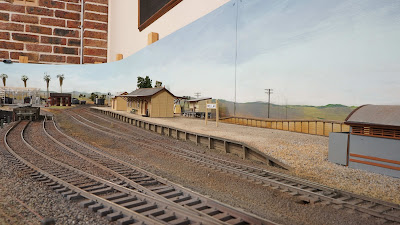 I managed to achieve this over a week with basically one eye as the other has been deeply involved in my attack of the Shingles and I am currently having cortisone eye drops every two hours as the eye has become blurry and I can't read with it at all. The eye specialist says that he can't guarantee that the treatment will be successful but I am hopeful as he said the majority of cases do well if it is treated quickly which is the case.
Posted by Ray P at 10:26 PM 4 comments: