The Continuing Saga of the Small Job

Following on from my previous post I spent the next two weeks locating the spray booth, the exhaust fan and constructing the connecting ducting.

I screwed a plastic gutter downpipe collecting box to the wall over the vent that I was going to use as the outlet and sealed it with acrylic flexible sealer. I used 90mm PVC pipe from the spray booth to the exhaust fan that I had mounted on an interior dividing wall in a timber box. The air exiting the fan was channelled into a plastic plant container that tapered down to about 200mm and a 90mm fitting was mounted in the base of the container. Silver foil covered spring wire ducting available for clothes driers was then sealed to the 90mm outlet of the fan and run to the vent in the brick wall. A lot of time was taken in waiting for sealant to dry sufficiently to move on to the next stage.

Before making the final ducting connection to the wall vent outlet I turned on the fan.

Well, hardly any air came out!

I removed the ducting at the fan enclosure and got a reasonable air flow.

The problem seems to be that the spiral spring ducting is not smooth inside and the ridges of the spring is sufficient to impede the air flow.

I now have to re-think the whole project.

I am going to put a new smaller spray booth as close as possible to the wall vent and cross my fingers, unfortunately I don't have a lot of room for the fan enclosure.

The spray booth and fan enclosure had previously done years of service at my old home but it was ducted with smooth bore 90mm PVC pipe.

A couple of weeks ago I decided that the foliage of the tree in the photo of 1307 was too green so I proceeded to spray paint it with a lighter olive green. To keep the different shades of the existing foliage I thinned the enamel matt paint more than normal and made up about a thimble full of the paint and started spraying.


Now here is the rub, I was doing it in the garage without any sort of spray booth, just a cardboard box. The theory was that I would do it quickly and exit the garage.


Well, too late, a voice came from the doorway, "What are you doing? I can smell that in the study!"


Chris my wife had arrived.


I should explain something here, it is of course not a very good idea health wise and I of all people should know as about 8 years ago I had Lymphoma a form of cancer that was caused by exposure to benzene solvent at work 30 years before.


So, I quickly assured Chris that I would set up my spray booth that had sat in the corner of garage under the layout since we moved into our new house in 1995.


I had not been doing much spraying because of the difficulty in extracting the booth from under all the spare timber that had 'grown' around it.


Now this meant moving a lot of saved treasure (read junk) and the first picture is the result. About half of the timber went to the tip on Monday at a cost of $25 not counting the value of the timber itself.

The tree, the cause of all the trouble is sitting on top of the lower staging yard on the site of the Cassilis branch terminus station. 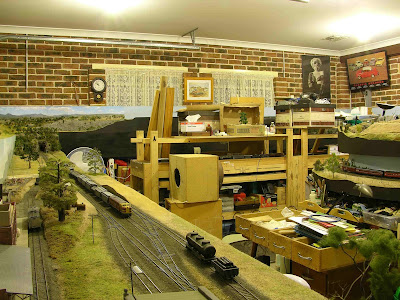 The second picture shows the booth on the left and the brick wall where the wall vent is located that will be the exit point for the ducting. 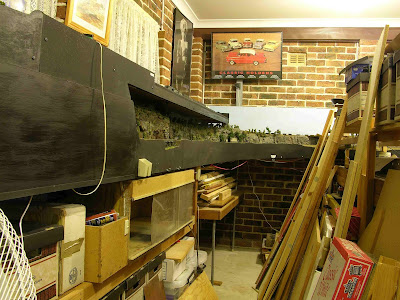 That was last Saturday and since then I have assembled most of the ducting and tonight I was about to connect the ducting to the wall vent exit when I found that the bricks were saturated. Fearing real rising damp problems I investigated but the wetness was only a small area at the vent. It turned out to be a coiled hose on a bracket outside that was just dripping onto the wall, what a relief.


Now of course I have to wait for the bricks to dry out before I can apply any gap filling sealant, probably at least a week, I hope we don't get any rain for a while.


I started all this before I went to the Epping Model Railway Club exhibition last Saturday where I came home really enthused by Bowen Creek and the incredible scenery of Muskrat Ramble.


I also picked up a 60' Sellars turntable from Anton (very nice) for my Cassilis station and was looking forward to starting the benchwork and getting on with it.


Bowen Creek was such an incredible piece of work and I wanted to get right to work.