Special Tool Required and a Mistake

While working on the model Werris Creek station building I realised that I had to cut some gaps into the large 'moulding' that runs around the outside of the building at the ceiling level of the upper floor. The reason for the gaps was that there are some rainwater collection boxes (scuppers?) mounted into them. The building has a saw tooth roof and this means that the rainwater has to go out through the side of the top wall and 'moulding' into  the scuppers and then down the drain pipes.

Now, the mouldings are 3D printed in a sintered nylon type material and I was worried that I would have trouble cutting the gaps. After a bit of thought I came up with a plan to make a knife/chisel of the correct width for the gap(s).

I took a single sided razor blade and clamped it in my vice then used my motor tool with a thin stone tool (read circular saw effect) to cut the blade to the width I needed. I then parted off the blade near the thick reinforcing back edge of the razor blade. This new blade was then mounted in a hobby knife as in the photo below. 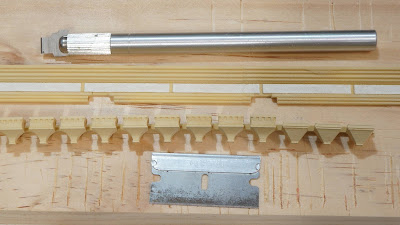 The nylon cut surprisingly well if the blade was used as a chisel, just vertical pressure. As can be seen from the above photo I actually made two chisel blades for the two horizontal cuts, well I modified the blade to make the thinner top cuts after the first wider cuts were done. The 'scuppers' can be seen in the photo below the moulding.

Now for the mistake. I think we all have been well into a model when we have that "Oh Oh" moment. Mine came after I had glued the 'scuppers' in place and was dry fitting the upper level awning supports on the North West platform side of the building. I immediately noticed that the 'scuppers' were too big as the tapered bottom would end up cutting into the corrugated iron of the awning.

Investigation showed that I managed to either miss count the width of the 'scuppers' in the number of bricks or had messed up the scaling during conversion after drawing them full size. It turned out that they were two bricks wide and it seems I had decided that they were three wide, only a 33% error!

So I took the building to our Ramblers meeting last Friday night for a 'show and tell' and admitted my error. Ron was good about it and said it would be OK but it bugged me (as it probably did him but I think he was just feeling sorry for me). Anyway by the Saturday morning of the Epping Exhibition I knew that they had to come off and be replaced by correct sized ones. I will have to fill the gaps a bit on each side as well but I do have the bits that were cut out. They came off relatively easily but I will have to touch up the painted bricks a little.

The scuppers have now been rescaled (easy to do on the computer) and some more have been ordered. The delay while I wait is useful as I was a bit over all the painting of the windows and needed a bit of a rest from it.

Here are a couple of photos of the building with the large scuppers in place and it can immediately be seen that they are too big when compared with the real photo above. The joints in the brick sheeting will be covered by the downpipes from the scuppers except for one on each side in the top parapet wall section. 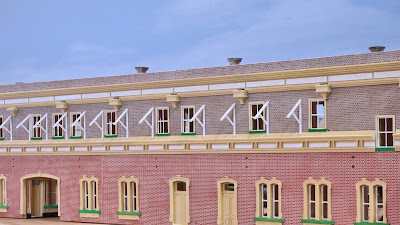 The mistake highlights the problem with working from several plans which are only line drawings at best and also with then scaling off photos using references from those line drawing dimensions and some actual dimensions such as widths of the various doors and windows. So a number of the detail bits were designed separately from the building and each other. One example are the chimneys that can be seen poking their tops above the parapet which were dimensioned by counting, guess what, bricks. One thing I did have accurate plans for were the white awning supports on the second level.

Overall, I am very happy with the way the building is coming along and it should look good once it is on Ron's Werris Creek layout.
Posted by Ray P at 10:48 PM 2 comments:

A Few Photos from the Epping Club / Thornleigh Brickpit Exhibition

Chris and I enjoyed the day mainly catching up with friends. The commercials were well represented but there weren't too many layouts on show with large empty spaces on the floor. I think that the club's policy of not exhibiting the same layout if it was exhibited last year is a mistake. I know of at least one previous exhibitor who was upset about not being asked this year having exhibited last year. I must say that Chris and I missed seeing him as he lives a long way away, he will know who he is.

Epping Club, please have a think about your layout policy.

Anyway, here are the photos I took at the exhibition on Saturday, not all layouts are represented and that is no reflection on their quality, I just took some photos in between socialising. 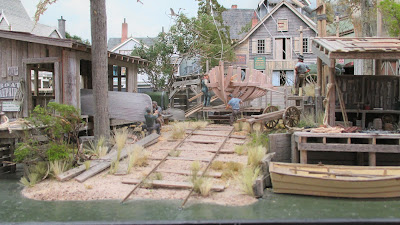 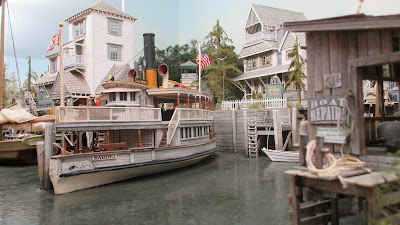 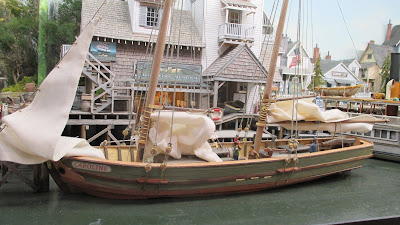 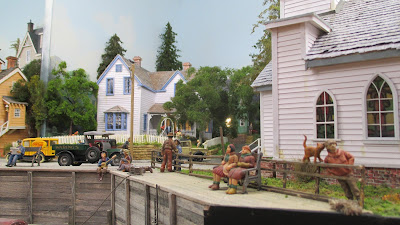 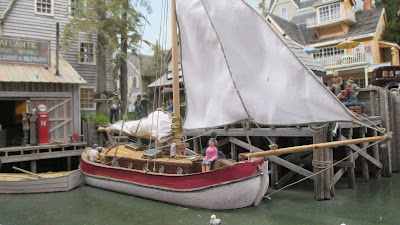 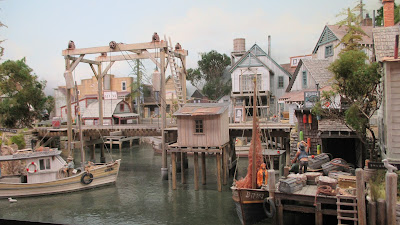 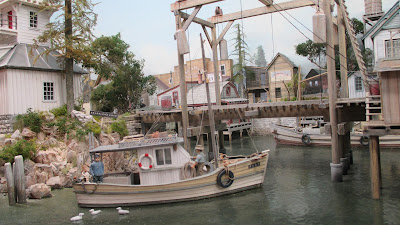 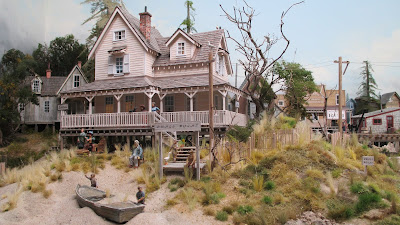