I have been slowly moving along with adding more scenery to my Cassilis station in between those other life matters.

Here are a few photographs to show what I have been doing. The backscene has been removed to assist with access, so the views down the yard showing other parts of the layout will not be part of the final scene. The backscene is normally at the rear of the loading bank and the view from the operating position/aisle is of the rear of the station building and the rail side of the loading bank.

Since the ballast was held in place with Long Life Floor Polish (see the last post for an explanation) it was relatively easy to remove the ballast along the edge of the goods siding to give the appropriate clearance from the rail for the loading bank. The Long Life acrylic clear doesn't set the ballast as hard as diluted PVA does which allows it to be removed easily.

I topped the expanded polystyrene backfill of the loading bank with plaster; while it was wet I drifted on a thin layer of brown tile grout and then over sprayed it lightly with methylated spirits to break the surface tension for the following spray of water. As usual with thick plaster it has cracked in a couple of places due to shrinkage and this will have to be corrected. I intend to run a bit of PVA into the cracks then apply some more tile grout and follow up with a spray of methylated spirits and then water to set the grout. Note that the tile grout would likely have Portland cement in it so if applied in depth it could be hard to remove later if required.

Well, that is about it for now, I hope to keep on keeping on with Cassilis.

I have just found that there was a Signal Lamp Blind part missing from the detail parts on my Left and Right Hand Fine Detail Bracket Signals released recently. The bracket signal requires two and there is only one.

The designs for both bracket signals have now been corrected.

Unfortunately, a 'guest' ordered one of each from my Shapeways Signals Branch Shop on 7 August.

As it was a 'guest' I have no way of knowing who ordered the signals and therefore who to contact about the missing part on each bracket signal.

Could the person who ordered these signals please contact me by email at rpilgrim@bigpond.net.au and state the Order Number and I will work out how to get the extra parts to them.

If you place an order on my Signals Branch Shop please register (as a designer I believe) so that I have a way of contacting you if necessary.

Back to Work on the Layout

I previously promised a post about the layout after a number about 3D printing so here we go.

Way back in March of 2012 I did a post on where my Cassilis branch terminus was up to construction wise. Here is the relevant post.

Well, I have started on Cassilis again, working on the track. The yard has been operating since 2012 but there were a couple of spots that occasionally would give trouble. The yard has scratch built points and I had aligned the rails, leaving a gap where it was required electrically for DCC. I used Micro-Engineering Code 70 flextrack and of course I had used track gauges when making the points. Now, I found out that the ME rail had a wider gauge than my pointwork, not by much but with nothing physically aligning the rails this was an issue.

I bought some ME insulated rail joiners and also some Peco code 70/75 insulated rail joiners to correct the issue. I had to use short lengths of the insulated fishplates so that I could lift the end on a point enough to get the fishplate on to the rail then drop the rail back down and slide the fishplate  across the gap onto the other rail. I tried the ME fishplates first and could not get them onto the first rail as the slots for the rail were very fine, too hard, so I abandoned them. The Peco fishplates have a central small vertical tab meant to keep the rails apart but as I needed a short fishplate I cut through on each side of the tab to make two small fishplates. Although a little bit fiddly these worked much better. I proceeded to do as many of the gaps in the yard as I could. Several were aligned quite well, usually between my points, so they didn't need the insulators. There were also a couple of joins that I couldn't safely raise the rails on so they stayed the same.

I followed the fishplate installation by checking the vertical alignment on the rail gaps without the insulated fishplates. Several rail joints needed a bit of shimming with some 0.010" plasticard.

After this came a spray with some light grey acrylic paint over the sleepers and rails to visually tie the flextrack with the points and their PCB and timber sleepers. If you every spray your track with acrylic paint be sure to immediately clean the track with a track rubber as the paint will go off quickly and be hard to remove if left. No, I didn't get caught with this one.

The small section of the yard at the turntable end had some scenery and the track had been ballasted with Woodland Scenics Fine Ballast Gray Blend (B1393) to imitate loco ash ballast as often used on branch lines. So knowing that I had some I went searching through my scenery materials but, of course I had used it on the branch line running from the junction near Wollar and I had very little left, a trip to the hobby shop was needed.

Ballast obtained, I spent this afternoon applying and shaping the ballast using the method I posted about in March 2012. I use an edge painter 'brush' that I found at Bunnings as shown in the following photos, dragging it lightly along the track, sweeping the ballast off the sleepers, not hard to use.

Here it is firstly showing the underside bristles.


Now in an action stance, less the copper bar weight I used to keep it upright for the photo (I take time shots and can't keep my hand still enough). 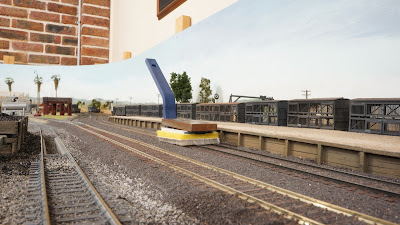 When I did the Wollar ballasting (above) I used some liquid hairspray that my hairdresser daughter had spare and it worked well but did it smell!. This time I crossed my fingers that I wouldn't get any swelling of the baseboard where three tracks cross and used water based 'glue'. The two 1800mm Cassilis baseboards are joined in the middle of the yard so I taped over the join and also a number of screws that hold the boards in alignment. I wanted to be able to find these screws if I needed to separate the two boards in the future and having the screw heads full of plaster was not a good idea, so I took this photo. 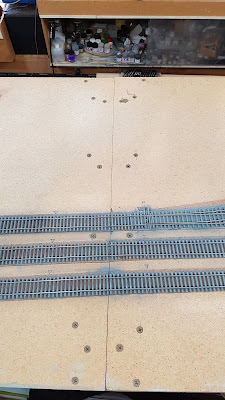 The water based 'glue' I used was Long Life Self Shining Floor Polish which is really just a thin acrylic clear sealer, basically like a thin glue. I have used this for a number of years for glueing soil, ground covers and static grass. It can be found in Woolworths in 500ml yellow plastic bottles. or you can get 5 litres at Bunnings.

So here is where I am up to. 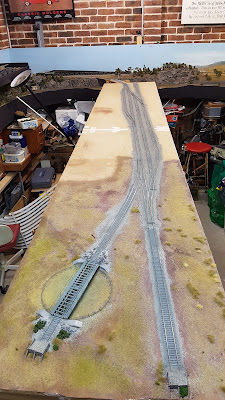 OK, now I have to confess. I started back on Cassilis as I wanted to try out my 3D printed fishplates!

Here are a couple of views of the 4 bolt versions in place. 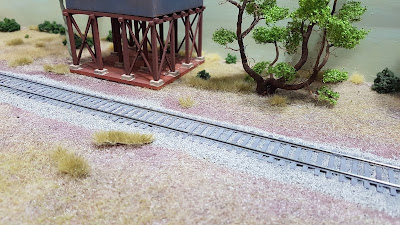 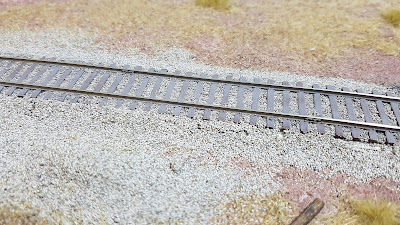 Now 4 bolt fishplates are usually found on sidings but can be found occasionally on the branch main so I thought I would do that. The points have different plates that appear to be the 6 bolt variety so after a bit more research I will work my way down the yard.

Apparently NSWGR had two sizes of rail, 60ft for main line and 45ft for sidings. So that means that the 6 bolt fishplates should be spaced every 60ft of main line and the 4 bolt fishplates for sidings every 45ft. Each rail joint is offset nominally by half the rail length but I am sure that wandered around a bit based on the track layout and where the rails met a set of points which would have two fishplates opposite each other. The 60ft lengths of rail would have been interesting to shift on two flat cars, probably sitting on a 'turntable' affair at the centre of each flat car. Too hard to do on a model I suspect.

If the 3D printed fishplates are placed opposite each other I have checked and they don't foul the flanges on either Code 110 or Code 88 wheels.
OK, I just checked some photos I took recently in Oberon yard and the 'main line' seems to have 45ft rail and 4 bolt fishplates joining the points and the points themselves have 6 bolt which is to be expected. So perhaps, pioneer branch lines may only have 4 bolt fishplates and 45ft rail other than on the points. And I have a branch line approximately 36ft long and that isn't counting the yard!
Who made these fishplates and caused this problem anyway ....