I appear to have been a bit quiet of late but not so. I have spent some time working on a HO model of Aberdeen Station building for Ron Cunningham's Werris Creek layout.

For a number of years there was the start of the Aberdeen station building sitting on the platform of the Aberdeen on the Werris Creek layout. This model consisted of the walls in Slaters brick backed with about 0.060 " plastic. As I had a plan of the building I mulled over what to do about it. One Friday night at our a meeting I removed the building from the layout and told Ron I had taken it so he wouldn't wonder where it had gone.

A month later I returned it complete and ready to place on the platform.

I had decided to draw up all the windows, doors, gable ends, awning post with cast iron brackets and chimneys; then print them on my ANYCUBIC Photon 3D DLP printer. It turned out to be a bit of a mission as I had to draw up the brick arches that are over the windows and doors. Now that wasn't too bad but the fun started when I had to cut the shaped holes for the arches into the existing walls that were about 0.080" thick!

Ron had also missed a door to the 'Out Of' part of the building in the rear wall which is not visible in the very few photos of the Aberdeen station building (but it was on the plan).

As the building had no roof as yet I decided to try something different and I printed a roof in two halves on my Cocoon Create Model Maker PLA filament printer. These roof sections really gave the building a lot of strength. I had to do the roof in two parts as my printer is only a baby and didn't have a big enough build platform for the whole roof.

Even with the 3D printed parts the model was still a challenge due to the extra detail parts that still needed to be added. what had I started!.

The corrugated roof was added using some polystyrene sheeting and all those angles for the hip roof was a lot of fun, NOT!

The bricks were done to look like 'common' bricks as that is what they seemed to be. I had to guess a bit with the brick colour and also for the roof which appeared to be a very weathered green roof. I did my usual common brick effect using Tamiya Buff, followed by a watery off white wash for the mortar and then I used a watercolour pencil of a darkish brown to give the burn marks usually seen on common bricks in NSW.

Anyway I got there in the end and presented the station to Ron two meetings later.

Here are the only Aberdeen station building pics I could find:

Here is a link to the Aberdeen Station Building Plan.

And here is the model: 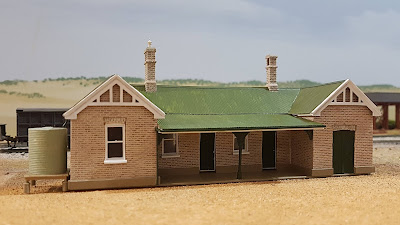 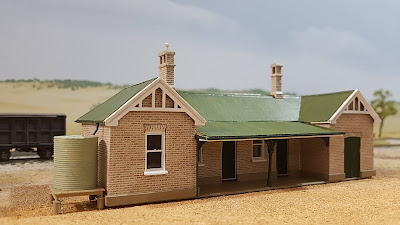 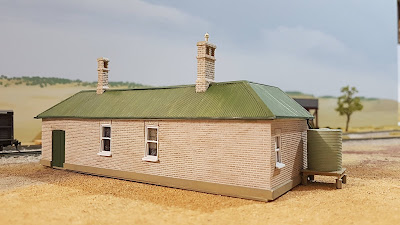 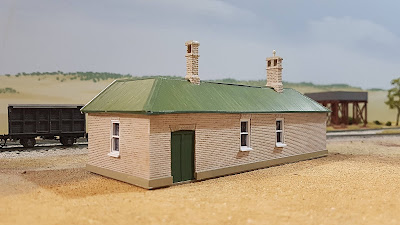 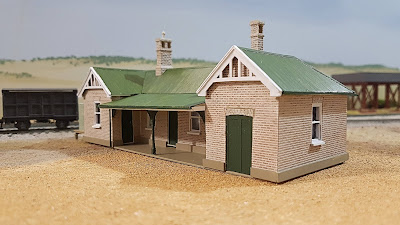 I will put the 3D parts on my Shapeways Signals Branch shop if there is any interest, just let me know.

Yes, I know, I still have to finish the Werris Creek station building, it is getting closer, next job is to work out how to do the brick platform edging, easy enough to say.