Time for an Update

I can't believe that it has been about five weeks since I last made a post.

Well, let's see, the spray booth is finished and working. It appears that the fan should be at the exit end of the ducting as it certainly sucks better than it blows. It could be better but provided I keep the sliding perspex 'doors' open about 300mm it works well enough so that I can't smell solvent when my nose is about 150mm from the opening, not very scientific but hey it works.

Next, I now have nine of the eleven undertrack Kadee uncoupling magnets but the point work has gone no where, real life sometimes intrudes.

Now here is something I have been pondering for a number of years.

Since I bought my digital camera and began taking model photos I have been painfully aware of the lack of height of my backscenes. I have difficulty framing my shots as trees and some taller buildings stick up above the top edge of the backscene. This puts them in front of the brick wall and removing the bricks in Photoshop to place a real background into the picture is a real pain.

When I built the layout I had to decide on the height of course and I foolishly went with the decision to cut 2400 x 1200mm masonite into three 400mm high boards in an attempt to save money. The 400mm high board only allows a 350mm high backscene by the time it is screwed to the layout frame. 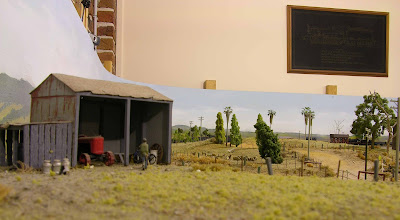 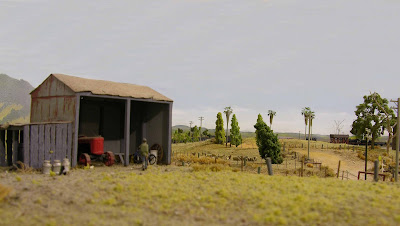 And here is what it would look like with about a 1200mm high backscene.

The problem I have been wrestling with is how do I retrofit higher backscenes?

I can't see them being 1200mm high but I think 600mm (cost again) would work reasonably well as the top level of the layout is at 1400mm so another 600mm would put the top well above head level.