A Bit of a Plug

I recently received a package in the post with some items from the Laser Rail Bits range of NSWGR timber infrastructure kits. For those who don't know about these I suggest you check out Rod Kelly's NSWGR Southern Line Layout in a Shed blog and his ebay store. Now I personally think Rod is undervaluing his work but for the modeller they represent very accurate representations of NSWGR infrastructure at more than reasonable prices.
I used the 7.5M recycled sleeper level crossing for the road crossing at Wollar near the flour mill. This pack contains two level crossings, presumably for those who have a double track main line, for $7:50 plus $3.50 postage.
Here is a photo of the crossing, I choose to weather it with light and dark grey/black pastels rather than use anything liquid based as it is quicker (no drying time) and it eliminates any possiblity of warping. I also built the small loading bank facing kit but used it as the platform facing for a small 'whistle stop' station on my Cassilis branch to pick up those local school children and add another operational dimension. This kit was just $12.95 and the same postage, of course if you buy several kits they are so light that the postage should just be $3.50 for the lot.
Here are a couple of photos of the station with a Rail Central PC1 station building recently donated to me by Bob Lynch when I was talking about my proposal for the station at one of my Bylong running nights. 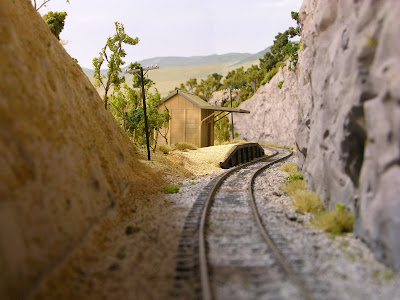 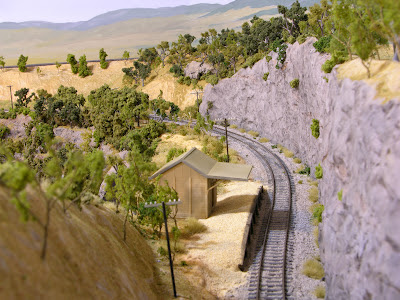 Once again I weathered the platform face with pastels but unfortunately because of the position on the station and the layout room lighting, the detail of the laser cut kit doesn't show.
I also have yet to build one of the timber ash buffer kits but I won't be adding the angled side bracings as they were later repairs, the actual plans do not show them (the three at the rear are on the plan).
Well done Rod, I look forward to the other kits you have coming, particularly the paling fences, I know where I can use a few and the small coal stage version for the Cassilis loco depot.
Posted by Ray P at 5:43 PM