I was prompted recently to finish some of my models as a result of seeing a very nice underframe for a SHG guards van on the SDS Models stand at the AMRA October Liverpool exhibition. I built a SHG decades ago from scribed timber and timber shapes but had never completed the detailing so out came the details storage box and away I went.
At the same time I decided that I would detail two Protype BHG guards vans as well. The BHGs were left to me as part of Chris' uncle Tom Parkes' estate so they will be a remembrance of him on the layout.
The inevitable happened and I ran out of details which meant a trip to Casula Hobbies last week. Unfortunately not all the items were in stock. I particularly wanted the AM Models end steps for guards vans so the second BHG will have to wait.
Here are photos of the SHG and one of the BHGs. The SHG has been fitted with the AM Models end steps. Yes, I have seen the warp in the SHGs top timber side step and have taken steps to correct it. It is amazing what you see in a photo, it didn't look to bad on the model. 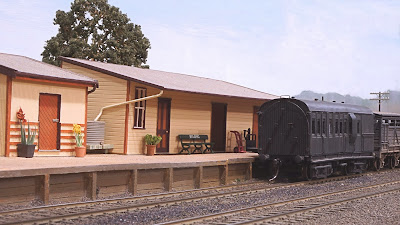 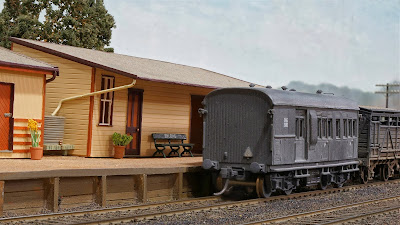 If you study the station infrastructure on Bylong you will see that the platform seat has BYLONG in white on it. I decided a week or so ago to print up some station names for the platform seats on my layout using an ALPS printer that I have access to. I made up the artwork from a 600dpi JPG of the NSWGR alphabet font that someone had produced a couple of years ago and placed in the public domain on a newsgroup.
After printing the water slide transfer (decal) I proceeded to check the print and realised that I hadn't done Cassilis! Oh well, the platform seat on Cassilis station is facing the back scene and can't be seen. I will probably do one at some stage as it would be nice to see it in a photo such as this one of the branch platform side at Wollar. Incidentally there are three platform seats with WOLLAR on them facing the back scene on the main line side of the Wollar island platform. 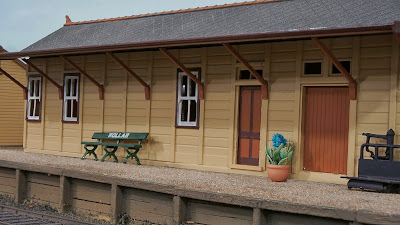 While I was applying the transfers I replaced the UL with RU on some lime wagons that I had obtained. I also had to replace the code on some SDS Models BCWs that I had bought a while ago without noticing that they were the four letter coded ones.
Here are the BCWs all weathered. 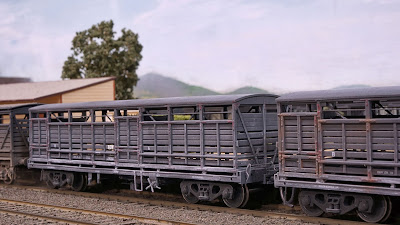 Lovely story and great shots as per usual...Just as a matter of interest...Can you spec the colours you have utilised on the station buildings etc...If they are off the shelf or any other info???

Interesting article, as always. Your structures are very fine, I like the detailing with the plants and the very comfortable looking seats! An echo forwards to your later post...but the structure colours don't look a lot different from GWR Stone No's 1 and 3...
cheers,
Iain

The station buildings are just kits with a few extra details.

It is quite possible that the stone colours were inherited from the GWR as the early influences were decidedly from the UK.