For many years I have been aware of the potential for 3D printing in the hobby. Way back in about the late 1980's or early 1990's Graeme Brown sent me a photocopy of an article on photolithography for 3D printing, I was immediately amazed at the possibilities however this was the really early days of the technology.

Time has passed and we are now in the dawn of a new age with the commercial availability of 3D printing for the masses.

I have been watching this process for the last five years or so and I decided recently that it was time I had a go.

The reason for this was that I had told Ron Cunningham that I would build a model of the Werris Creek station building for his Werris Creek layout. Well, I had visited the station but hadn't truly understood the enormity of what I was taking on. Several visits and a number of years later I had realised that 3D printing was perhaps one of the only ways to get what I wanted. I looked at making masters of the windows, doors and various other items and trim in polystyrene for masters to be used for casting but I couldn't bring myself to start. The problem was that there are four different windows and three different doors on the main building alone. If you also look at the refreshment room/railway hotel building adjacent to the main two storey building you will see that although the doors and windows of the refreshment rooms look similar at first glance they certainly aren't, so more masters to be made.

Here are a few photos of the buildings. 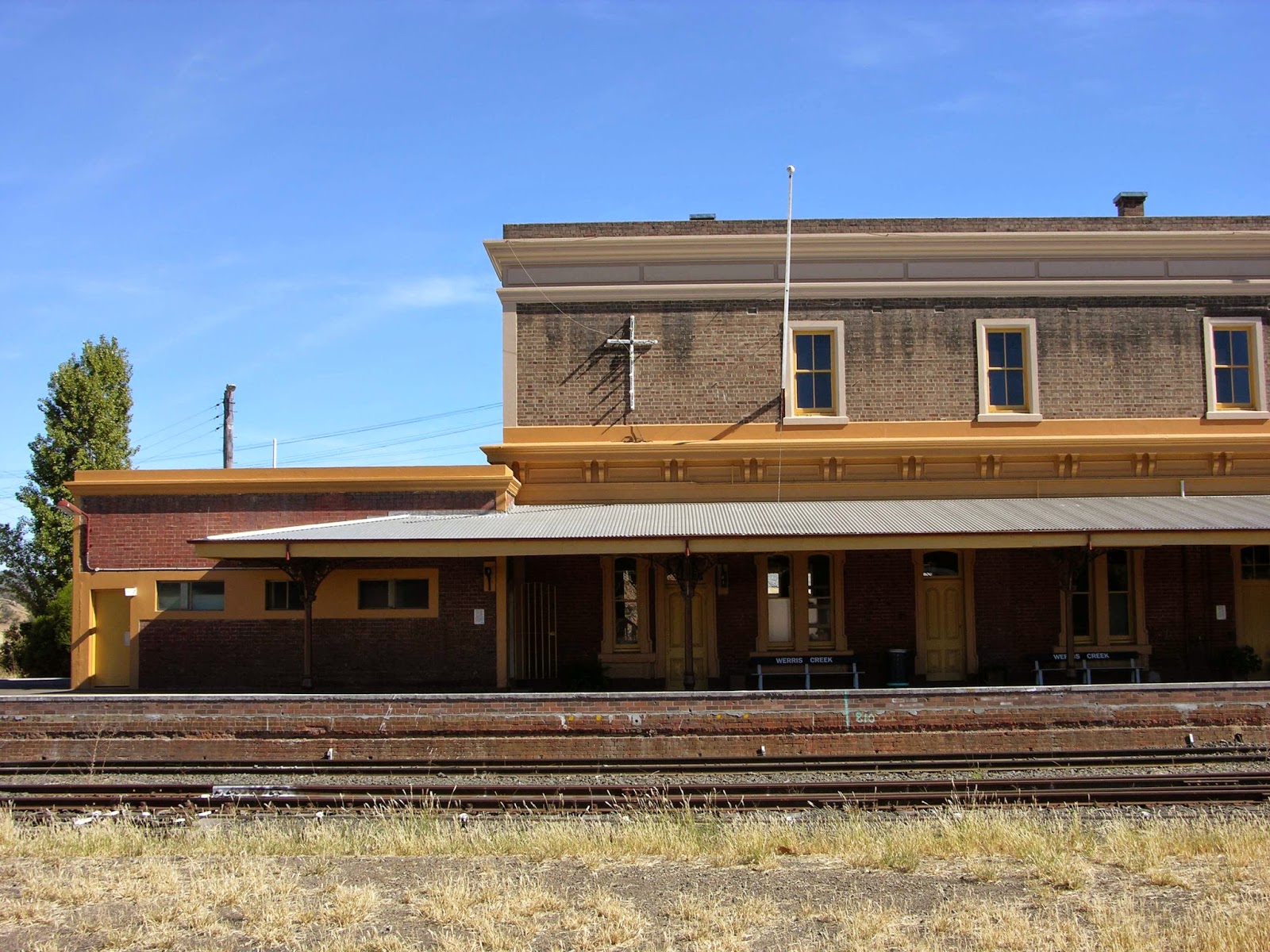 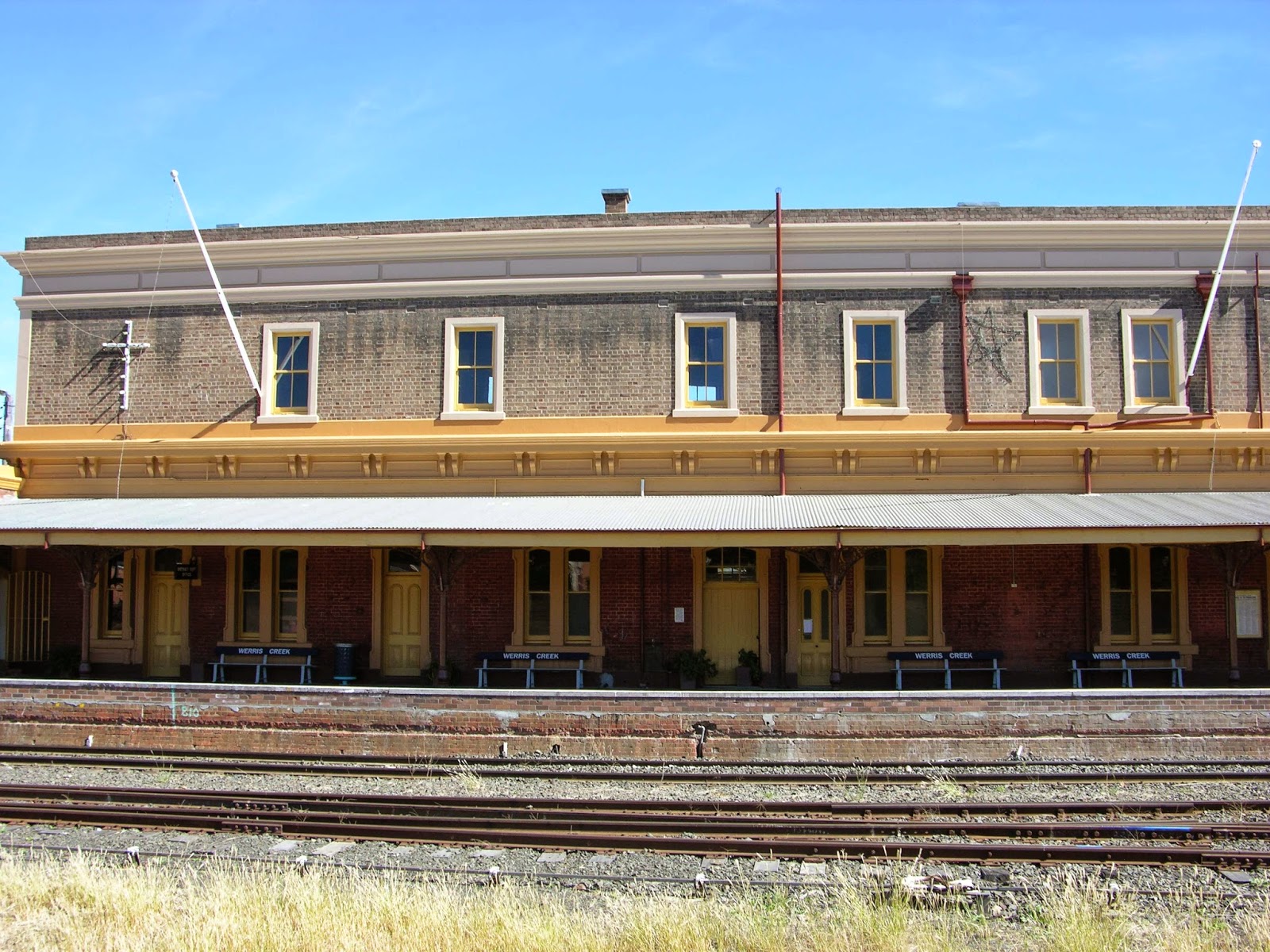 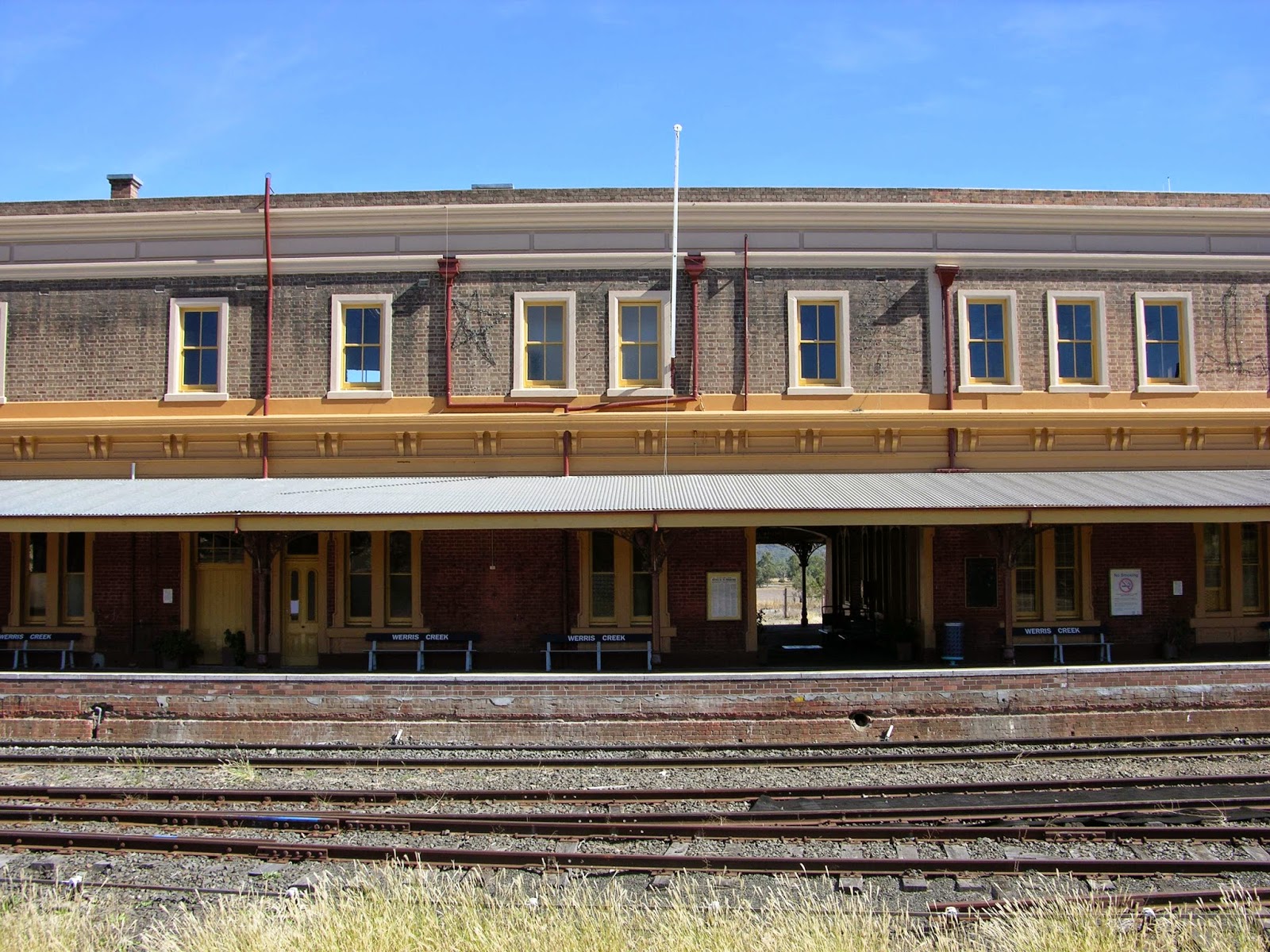 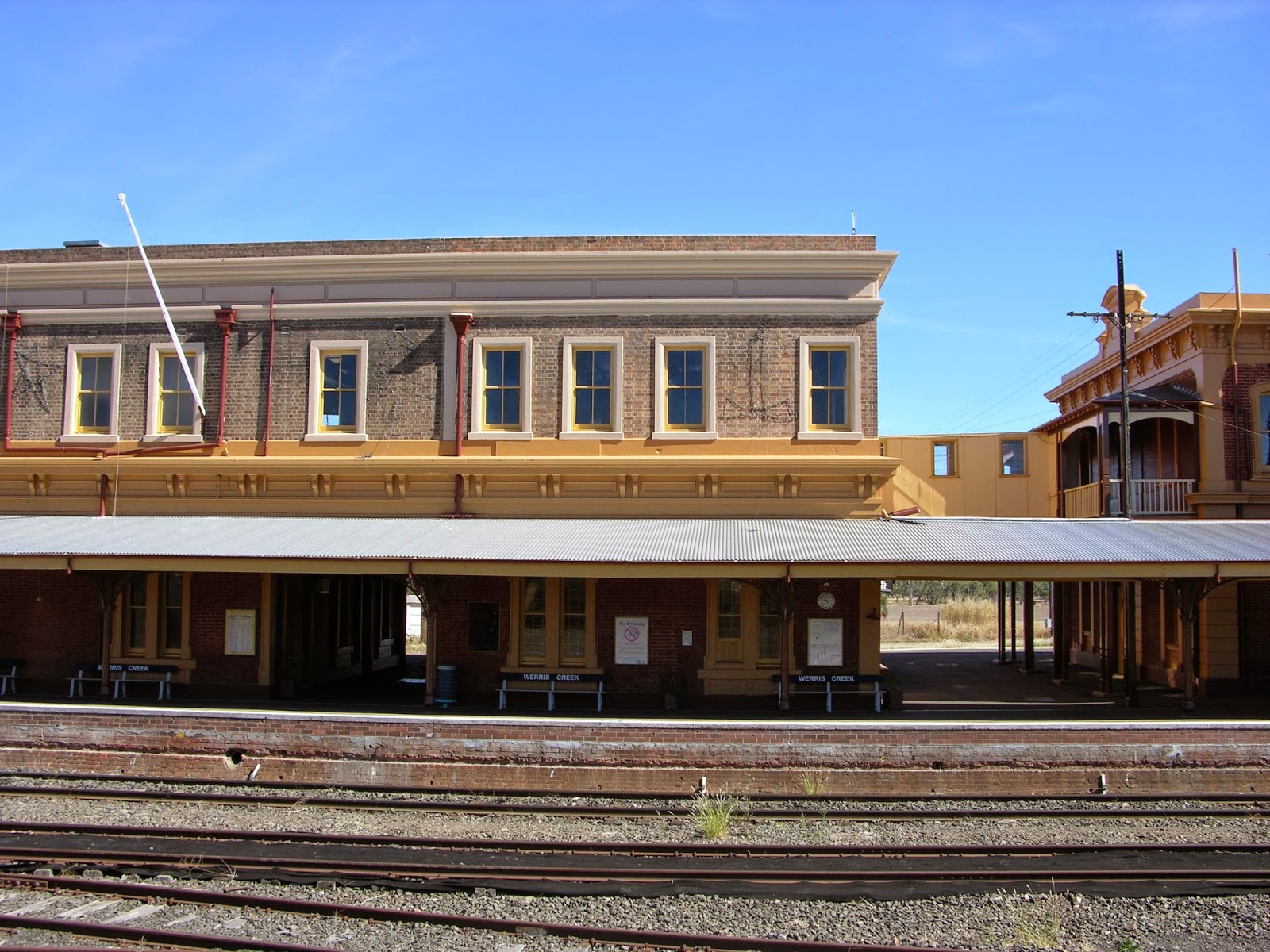 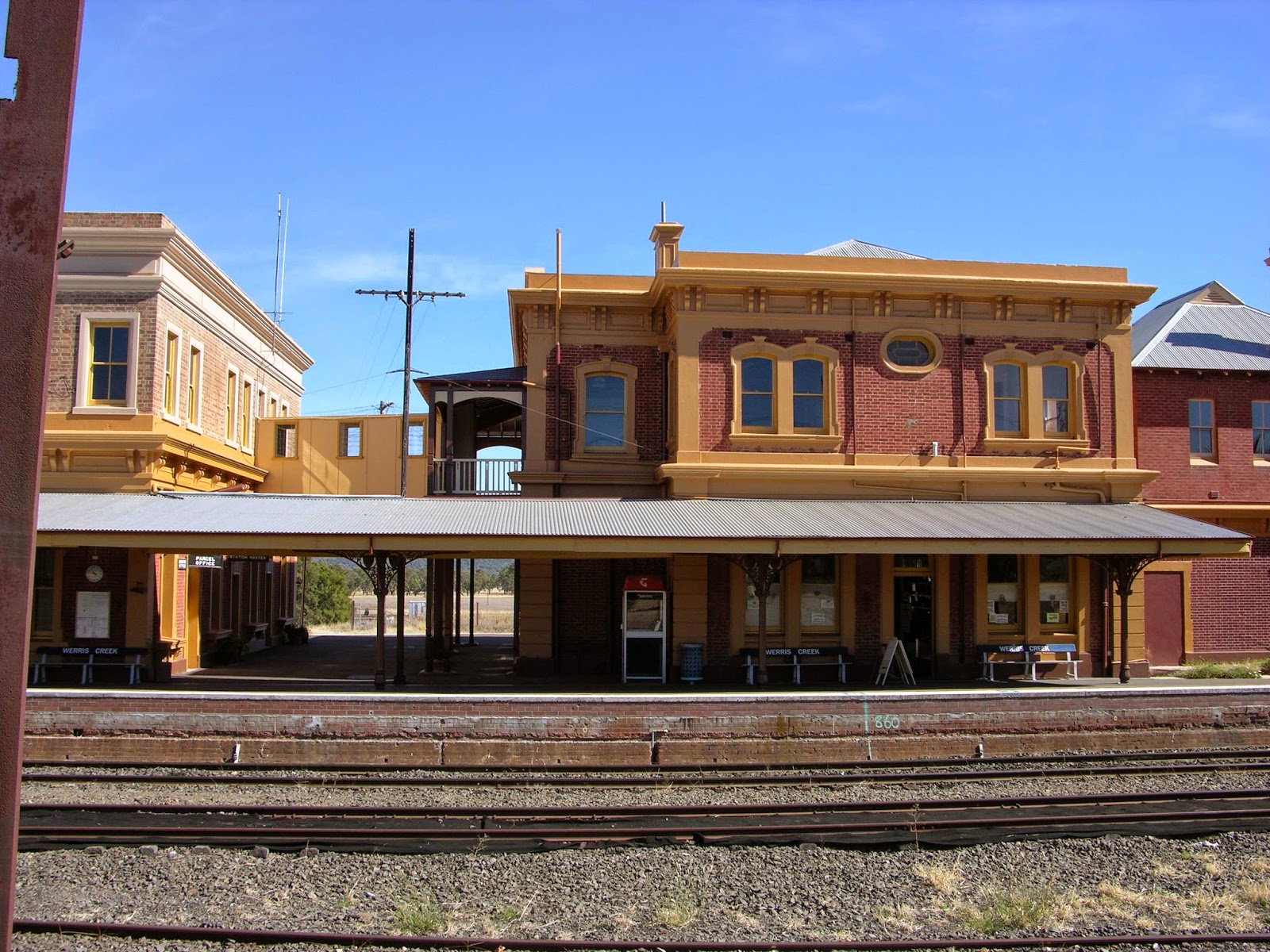 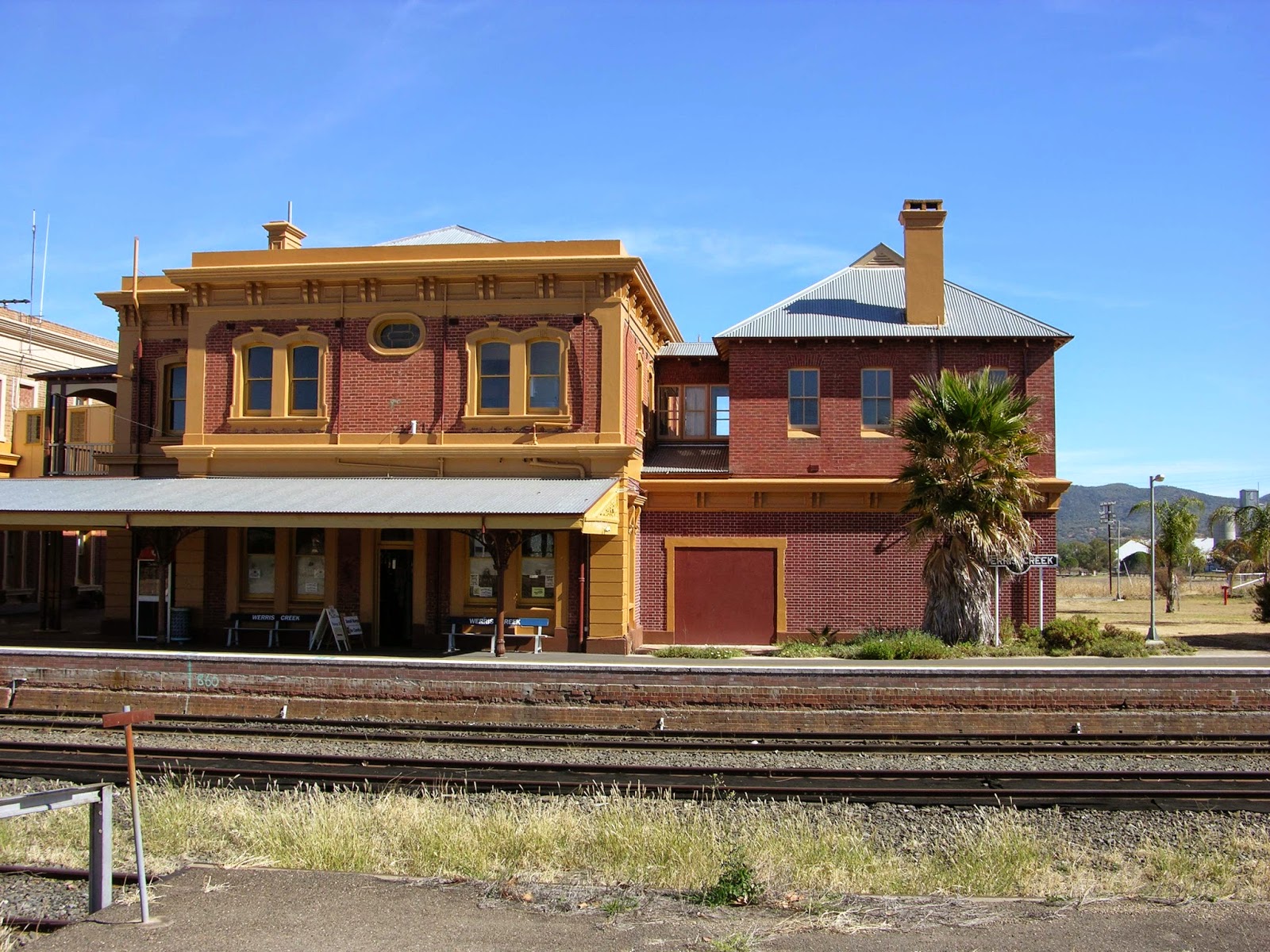 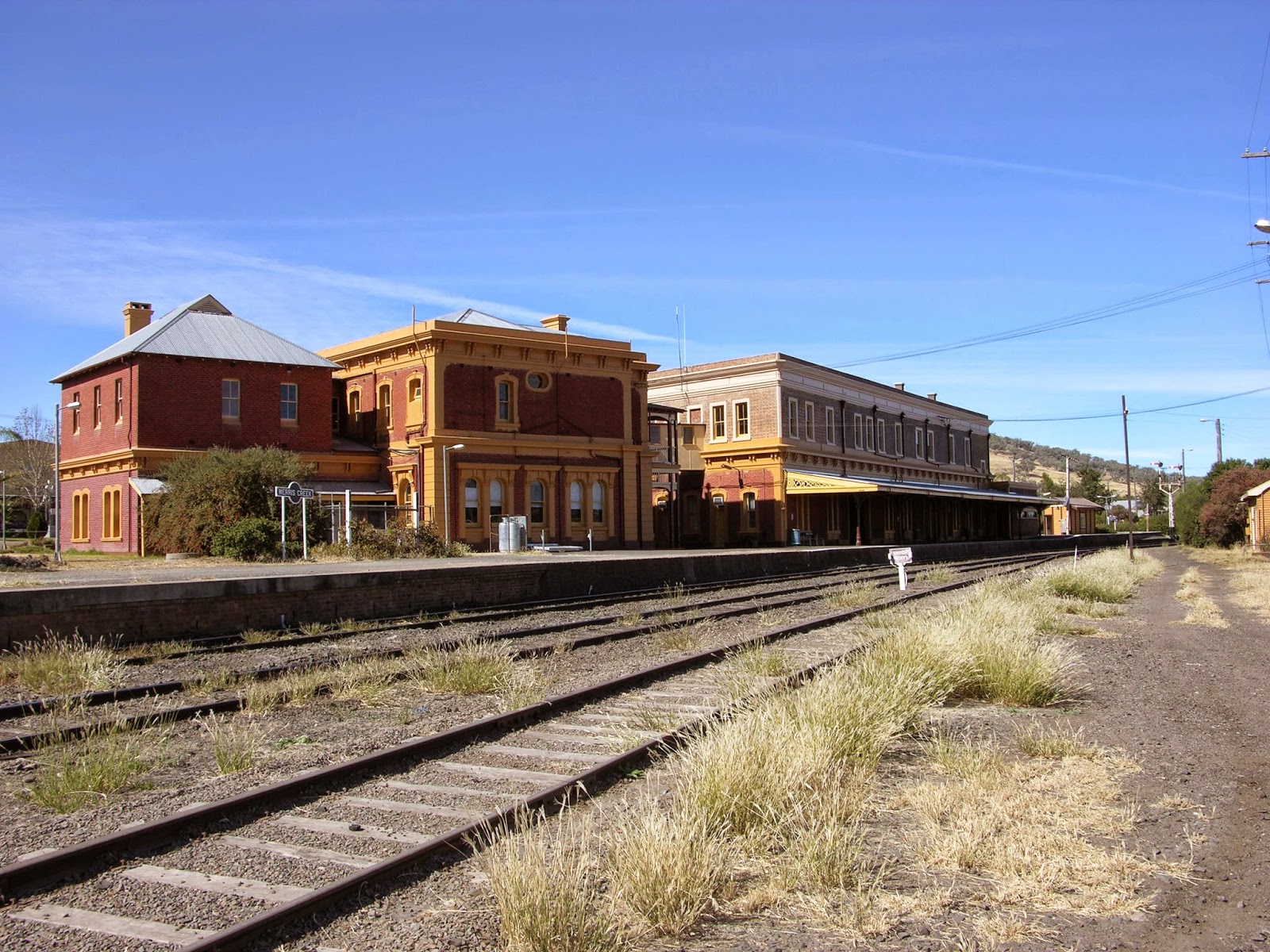 The above photos are of the current paint scheme. 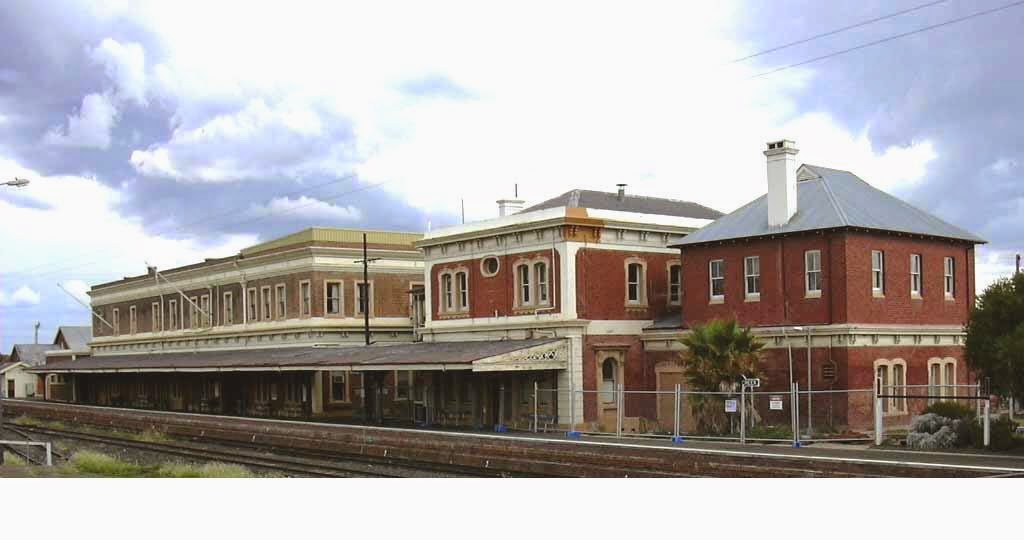 This photo is of the older paint scheme which the model will likely be done as.

It was time to learn how to draw in 3D on the computer. Now I have done some 2D CAD building/home extension plans but 3D is totally different and requires a new mindset and techniques. 3D models are drawn by using primitives (squares, rectangles, circles, cones, etc.) and then extruding them and removing parts as well.

I have been using Sketchup 14 a free 3D drawing program. There is a professional version of the program but it is US$595 so the free one will have to suffice.

I decided to use a company called Shapeways for the 3D printing and I also investigated another company called iMaterialise but they were more expensive. I think that iMaterialise may give a better print from my research but I needed to keep it cheap as I was just learning.

After about a week of tearing my hair out I managed to produce my first 3D window for the Werris Creek station. At this point I was able to upload my 3D file and the Shapeways web site immediately checked the file for printability. Needless to say it failed, by version eleven I had a printable file.

I then spent more time drawing the rest of the windows and doors.

Finally, taking my wallet out, I ordered one of each window and door in a material called Fine Ultra Detail which is a translucent resin plastic. The 3D printer uses ultraviolet light to change a layer of liquid resin to a hard plastic; the image being a 'slice' of the 3D model. The next 'slice' is projected onto the resin and so it goes. This material is not cheap and each door and window cost between US$7 - US$9 each and there are many of each door and window type in the building.

After about two weeks I received word that the prints had been despatched by UPS and that they would arrive by the end of the day on a certain date in about ten days time.

Waiting, waiting, waiting, I am sure that Chris was tired of me checking for the delivery as it neared the due day. Anyway it arrived on time and I was really pleased with the prints. The prints were each packed in a zip lock plastic bag inside the bubble wrap of the sturdy cardboard box. I found that although they had been washed there was still some resin on them so I cleaned them with some enamel thinners after some research on the Shapeways site.

By now I am sure you are wanting to see the results so here are several of the unpainted windows and doors in a mock up piece of the wall of the station building. 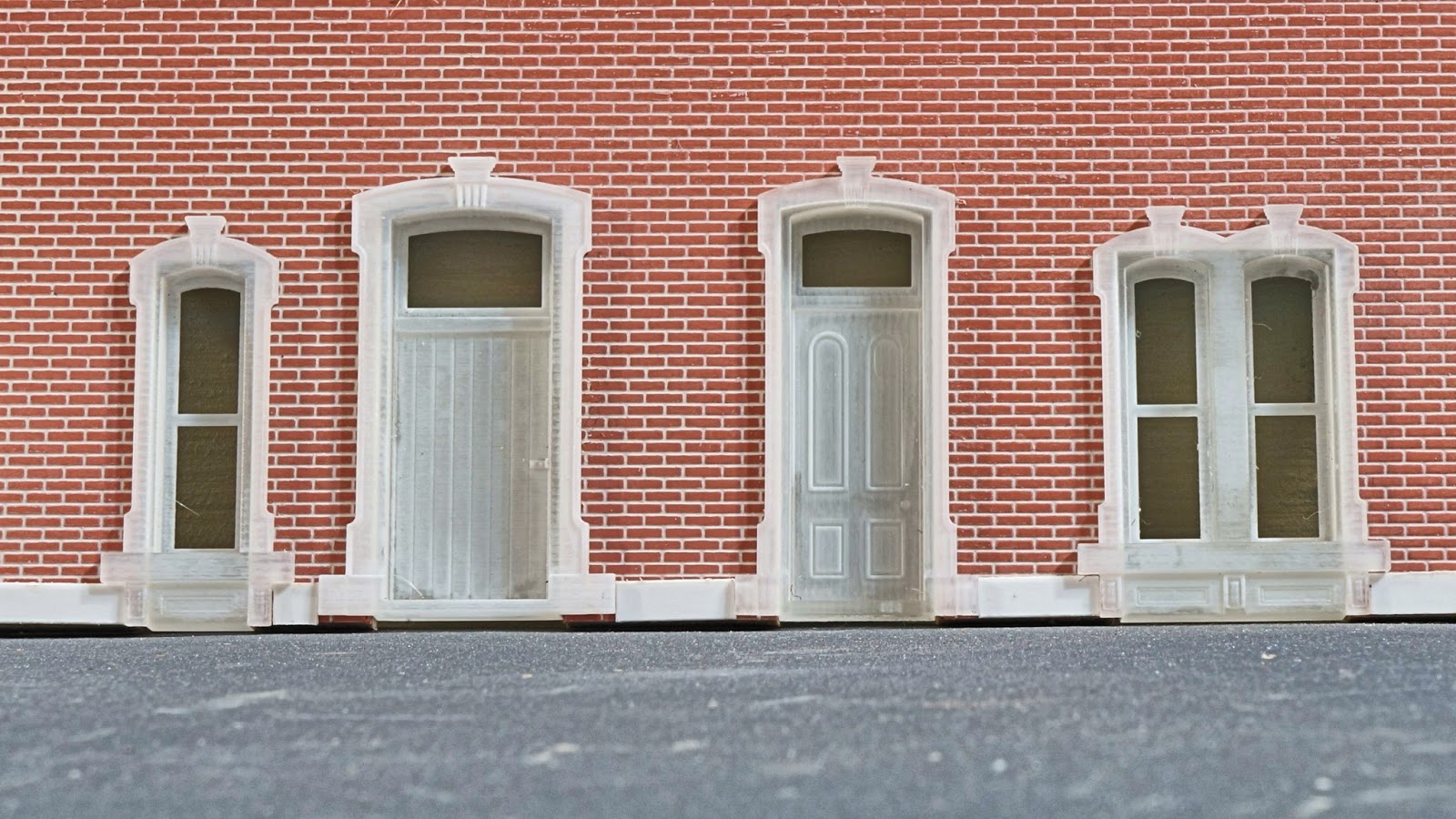 I have just sent off another order for trial prints of a window and door as well as an awning post and a few other trim pieces in a cheaper material called White Strong and Flexible which is actually a nylon, now to wait, again. The nylon shouldn't be an issue with paint or glue as it has a fine dotted texture from the printing process which should give plenty of 'key' to the paint and glue.

Incidentally, as far as I know the window and door styles at Werris Creek are not used anywhere else on the NSWGR.

Now don't go waiting for further exciting instalments of this build, it has already taken about six years to get this far. I will give some updates along the way though.

I've been using Shapeways for a while now to produce wagons (and other items) for both OO and OO9 gauge, and certainly with the small items there is a trick to keep the cost down.

Shapeways allows multiple parts per model when printing in Frosted Ultra Detail which means you can say print multiple copies of the same window, or one of each type, in the same model. The reason this is useful is that the majority of the cost of each model is the $5 handling fee. If you have each window as $5 plus the material cost it runs expensive, especially as I'm guessing the material cost is around $2 to $4 (to give $7 to $9). So you could print one window for $7, ten copies of that for $70 or ten copies within a single model for $25 ($5 handling plus $2 x 20 for the windows).

For large items it isn't always possible (there is a limit on the polygon count for each model), but it works with small items such as this one of mine.

Thanks for that information, I was aware that the price could be brought down with multiple items in one print but wasn't aware of how much the handling charge was.

I assume that the handling charge is just for the Fine Ultra Detail (FUD) material as the White Strong and Flexible (WSF) is only about $1.70 - $2 per window or doors.

Doing another trial print in WSF is as much about cost as to see what the finish is like and decide if it is acceptable.

There is a handling charge for each material, but it varies widely between materials. The charges are listed on the materials pages, but WSF is $1.50, Detailed Plastic is $2.50 and the Frosted Detail (FUD) is $5.

The reason the windows are doors are cheap in WSF is that as well as the $1.50 handling fee the per cm3 material cost is only $1.40. The problem with WSF is that it can't handle very fine details and the surface is quite rough so it is more suitable for some things than others. For example, here is a comparison of one of my latest designs in both WSF and FUD. As you can see all the bolt detail is missing as well as some of the definition of the planks in the WSF print.

That photo is exactly the comparison I was looking for. I guess that my trial WSF prints won't be too good so I will definitely look at FUD multiples in one print.

I won't cancel the WSF order though as it doesn't come to much and I have some other things being printed as well.

That is the one advantage to small items in WSF they are so cheap they are worth the experimentation. I printed the wagon I linked to before in WSF to see how it turned out even though I knew the FUD one would be more useful. At around $2 for a print that contained 3 wagons it was worth trying, and no real loss when it didn't really work out.

Great food for thought Ray. I will have a similar problem with the window and door treatment for my Wagga station, and your FUD 3D prints have the detail and finesse needed. The other route I am exploring is to scratch build a number of masters, and make a rubber mold, to cast them in resin. It is good that your experiences are condensed into a blog

Rob
Having previously produced castings from scratchbuilt masters of other times I made I deliberated for a long time before I chose to go the 3D route.