Werris Creek Station and a Couple of Signal Boxes

Sorry for the lack of posts over the holiday period, we haven't been away just other things intruding at times.

I have been doing a couple of things though.

In early December I installed the Werris Creek station building and platform on Ron Cunningham's Werris Creek layout. It didn't go quite as planned even though I had made a template of the space and worked out where the platform and building would go. Unfortunately, I didn't allow enough platform space for the awnings on both sides of the building which meant that the platform and building had to move further away from the apex of the North and North Western lines. The result was that the straight end of the platform on the North line had to be trimmed to meet the curve of the track as it wrapped around the room corner. Luckily the curved part of the platform is not really that visible and will be hidden once the Refreshment Room/Hotel building is in place (whenever that might be).

I decided that it was time for it to go to Ron's even though there are still a few bits to be done. The main things are the platform edging which I am hoping will be laser etched and cut so that it can be laminated onto the timber platform face. The second missing item was the small concrete paneled signal box on the apex of the platform. 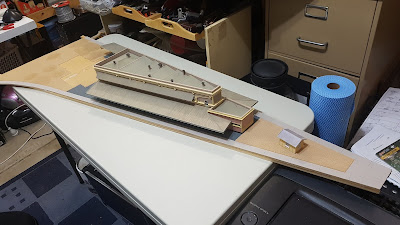 So, as the platform edging was out of my hands I had decided to work on the small signal box. On our way last November to the Convention at Armidale we dropped into Werris Creek and I measured the signal box and took some photos, these were now referred t as I drew up a 3D version for printing. I printed the walls and roof on my Cocoon Create Touch FDM printer (filament) and the doors and windows and gable barge boards were printed on my new Phrozen Shuffle XL DLP printer (resin). While the walls and roof are not as good a finish as would be achieved with the DLP printer they are adequate and straight/rectangular models are difficult to keep straight with DLP printers as the resin is prone to warping caused by about a 0.5% shrinkage when curing. Some warping is evident in the doors of the South Box model, these were straight when printed and warped later. 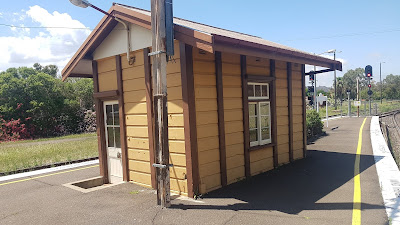 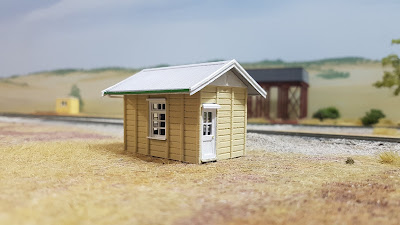 Please note that the current signal box is lowered slightly into the platform surface due to the platform having been raised. The model is correct for the period.

With the small signal box out of the way I decided that the next job was to do the same for the Werris Creek South Box which has long been demolished. I had two photos of is and a couple of sketches by an unknown person. This sketch was useful as it gave me an indication of what was on the rear wall of the South Box. The extra details around the signal box will be added once the South Box is in place permanently.

The prototype photos and the final result are shown here below less the deck at the front which will be built once the small scenery bank that it sits on is in place on the layout. 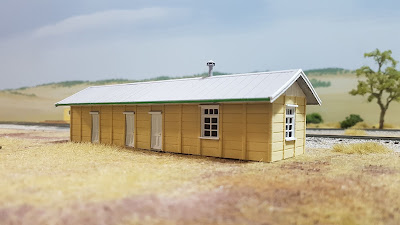 I have been up to some other modelling recently but that will be a subject for the next post.

The old south box signal box was also the meal room and locker room for the shunters the reason for the extra doors on the front, there were two old relay boxes as shown in the sketches at the rear of the box between it and the Main Road.

The deck/platform had a single pipe rail running the length along the face of the platform outside the signal box door itself. This was for the signalman's support for changing the staff for trains going the main line, to/from the station. At one point it had been timber but it rotted out and replaced with a steel piping arrangement bolted on a base into the platform.

Both ends of the platform had steps, the Northern end for shunters and crews walking up there to the box for relief of train crews coming in. and to share the meal room with Shunters. The Southern end was for the signalman to walk over to collect the staff from arriving trains going into the yard as well as handing the staff to departing trains from the yard,

The station signal box, in my time in 69-71 was very much a weathered and peeling older cream colour, rather than the darker one as painted everywhere these days. IIRC the box even in the 80's was of that old colour but in a bit better condition.

Yes, I can see the old weathered 'cream' colour, it is a difficult colour to find. It would be either Light Stone weathered away or maybe the cream that became common in the late 1950's - early 1960's. Either way, like you, I think the 'Heritage' light dirty orange/tan colour is wrong for the Light Stone and that it is more like the Middle Stone.

Ray, it could well have been a toilet meant for the signalman especially given the way it looks in the sketches.

From what I can remember in that time, a lot of the areas in WCK were not on the sewer, & IIRC the toilet facilities then were quite archaic especially with the loco depot, and most signal boxes, so likely the Sth box one was the same, but I cannot guarantee that.

I have a night photo that really does not help that was taken on the Wallangarra tour with 3616 at the station as only the eaves can be seen but nil help.

There is a photo in the Weston Langford collection taken of 5244 in the loop of the NW line, it does show the signal box and is reasonable, date for it is 21-01-61 it should still be there if you can look it up. The colour of the box actually is in more akin to the mid stone colour, rather than cream as I remember end of 69-70 period but certainly not a yellowy like cream which perhaps suggest the light stone colour. The WL pic shows the box is quite dirty with a lot of black edging to the external boards, visible is luggage trolley and its possible to pick the old brown colour of it, it had some shine but the box was dirty matte.

Thanks Colin for the extra info, It is amazing that given the importance of Werris Creek that there are so few photos of almost any part of it. I am sure they are out there in private collections but ....

Was wondering if these will be added to your Signals Branch range? Very interested in the smaller signal box for Gilmore

As a result of your query and after looking at a couple of photos of the signal box at Gilmore I have decided to draw the Gilmore box up and put it on my shop. Keep a check on these comments and also Facebook and this blog.

Ray Thank you very much, will keep up with the blog and facebook
Chris