The post was mainly about the small sleeper built retaining wall that I needed to make and install to retain the existing scenery where the triple bracket had to go.

This time I want to show what I did about controlling the triple bracket and also how I solved the visibility issue. The triple bracket was placed on the curve leading into Wollar and as such the arms were not easily visible to determine which track was set up for the train entering the yard.

As mentioned in the earlier post I cut the triple bellcrank style mechanism away and replaced it with one of my triple linear servo mechanisms by glueing it to the underside of the existing triple bracket base.

I then set up three Tam Valley Depot Singlet II servo control boards where I could access them from the front of the layout.

I extended a LED from each Singlet II to the front of the layout fascia and mounted the LEDs in a 3D printed box that showed which track each LED related to. The LEDs are bi-colour so show red or green depending on the signal arm position.

Here is the box with LEDs in place, working and showing green for the Main line. 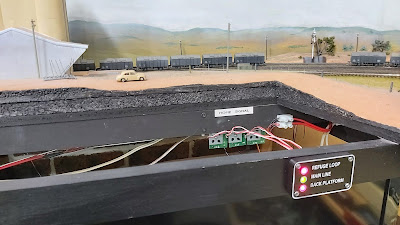 At the moment the triple signals can be operated by the buttons on the Singlet II control board or by accessory commands. The intent is to use an NCE Mini-Panel to change the appropriate signal arms based on the point levers (control panel switches). There is an Accept lever (switch) that can put all triple bracket arms to Stop.

So, the points will be set first, then the Accept lever will be set to allow entry and the appropriate signal arm will change to clear. The responding LED will show Green on the indicator box on the layout fascia.

Incidentally, the gap between the inner layout frame with the Singlet IIs and the outer piece of layout frame where the indicator box is mounted can now be filled with a piece of baseboard and the scenery will be extended down from the road to the front of the layout.

Most TAM Valley items are now not available

Yes, I know that, but this is a post about how it was built.