A Home for the BYLONG Layout Circuit Breakers

Several years ago the layout gained a mysterious short circuit even though I hadn't been doing any wiring or trackwork recently. After a lot of searching under the layout and checking the track for closed rail gaps, I called in the big gun, Marcus Amman.

Marcus spent an afternoon with me checking all the same things and we still came up with nothing. At this point, it was decided that I needed to replace the NCE EB3 circuit breaker board as the EB3 boards were known to be a bit flaky. So, three NCE EB1 circuit breakers were bought and temporarily installed in the wiring. Now what I mean by temporary is that they just hung down below the layout suspended by the wiring to them. This situation stayed that way until about a month ago when I decided it was time to fix the mess.

I won't go into a too long-winded explanation of what I did so I will present the photo below and it will become self-evident. The EB1s are mounted on the perspex panel with 3D printed stand-offs. The stand-offs were 3D printed because we were in COVID-19 lockdown and I didn't want to do Click and Collect at Jaycar where there is a whole range of different sizes. Longer stand-offs were also printed to mount the panel on the layout fascia. The lit red LEDs on each EB1 board indicate that all is well. 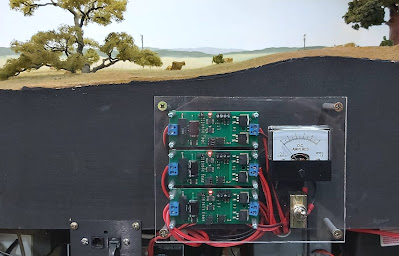 Now, I should mention that somewhere along this journey when the EB3 board was replaced by the EB1s the short circuit disappeared and hasn't shown up again.

I should also state that the mainline was divided into two districts and the Cassilis branch was the third district. The mainline was divided at Coxs Gap loop but for years the two mainline districts would shut down when there was a short in either, I obviously had a sneak path in the track wiring. I searched for this for a long time and eventually accepted that this was just the way it is. Of course, when doing something totally unrelated under Coxs Gap loop I found some wiring that went from one end of the mainline outside the loop to the other end, it was tucked up behind some layout framework. A quick snip and all was well with the BYLONG world.

In the photo above a toggle switch and a 5 Amp ammeter can be seen. This measures the total amperage drawn by the layout when operating. The toggle switch is to cut the ammeter out of the power to the track when not reading as it uses some voltage. It is turned on when needed to check the current draw.

I am very pleased with the installation and it has taken away my concerns about those EB1s hanging in the wiring, also they were not very professional looking.