Now for a little noise and movement 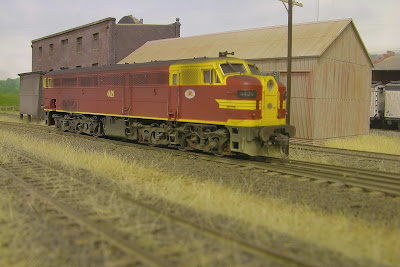 ﻿﻿﻿
4429 outside McCauleys Hide Merchants at BYLONG
I have been working for a while on trying to come up with a suitable set of parameters for DCC operation of diesels, to, as much as is possible within the constraints of the various decoder specific features and CVs, give us realistic operation.


I am reasonably close now and have decided to share my findings.

This video shows a Trainorama NSWGR 44 class (4429) fitted with a SoundTraxx Tsunami TSU-AT1000 Atlas form factor (board shape) Alco v12 251 sound decoder that has been adjusted to show the current state of my investigations. For those that are interested I retained the front Trainorama speaker but used an enclosure sold by Gary at the Model Railroad Craftsman at Blacktown NSW.

I use JMRI DecoderPro to adjust the CVs and have saved various set ups as templates to enable me to download them into a new diesel in seconds.

The NSWGR used to state the continuous tractive effort of each of their diesel classes the the maximum load and speed attained on a 1 in 40 grade.

Here is the data for the main NSWGR diesel classes:

Note: mph is miles per hour for the young ones ;-)Now I know there are people out there who have driven diesels but I am trying to keep this relatively simple as the current state of decoder development doesn’t allow us to drive our models realistically.

A diesel achieves its maximum power when the diesel engine is in notch eight, the control of the engine having eight notches.

I initially set up one of my 44 class diesels to give 10mph in notch eight to replicate an average of the above conditions for a heavy goods load.

The Tsunami has two different ways of controlling notching:

Or, it can be set up so that notching increases will occur at a set number of speed steps, e.g. every 10 steps, but the train can increase speed between these steps of course as it is the diesel engine notching up separately to the electric traction motors.

I initially tried the first method but quickly found that I would have the locomotive doing one thing while the engine sounds were doing another, mainly due to my distraction by other things happening on the layout.

As a result I chose the less realistic second method (the real drivers and purists will probably choose the first method).

Now I use the NCE DCC system and have standardised on the ProCab with its many options. One option is the use of buttons to control the locomotive speed and the ProCab has to sets of buttons, one set for small increments (1 step per press) and the another set for large increases and decreases (4 steps in 28 step mode and 10 steps in 128 step mode).

I use the 128 step mode and as such each press of the large buttons will notch up the diesel engine but will also display 10, 20, 30, etc. which tells you what notch you are in.

In combination with the notching I have set the maximum speed at 56 mph which can be reached by continuing past speed step 80 until speed step 126 (max. step on NCE) is reached.

Now we move to a really useful feature of most NCE cabs and that is that they have a momentum button that allows you to adjust the momentum of a train very easily. It is best to do this when it is stopped of course, like when you first couple up to your train. The momentum button will accept a number between 0 and 9, 0 being no momentum and 9 being the maximum.

A further aspect is the ability to use speed curves that can be programmed into a decoder and the Tsunami is set up with a special speed curve that I have devised.

The end result of all this is that you can start the diesel with a press on the small increment button and hear the diesel engine start to crank over and then fire. I then press down 1 speed step back to 0 to idle.

Next set the momentum for your train, I have been working on counting 2 - 3 bogie wagons in the train per increase in momentum number. I use a base of momentum 2 to represent the inertia on the diesel locomotive itself (light engine). The determination of the number of bogie wagons per momentum number is really a function of your layout, mainly its size and hence the length of the trains that you run.

Now, number boards on, headlight on as appropriate then hit the horn and start to notch up. If you have a momentum above 6 then you can notch up the engine to notch 8 if you wish and wait for the train to slowly move away as it takes the load.

One night when the Ramblers were at my place I had set up three locomotives one at 10mph notch 8, one at 15mph notch 8 and another at 20mph notch 8 and I asked them to drive each and we would decide on a suitable version. The decision wasn’t unanimous with most liking the 15mph and a couple the 20mph, it was decided that the 10mph was too slow at east for my size of layout (possibly good on a small layout for a slower run).

I have since driven at the 15mph notch 8 and feel that maybe the 20mph might be better, less realistic perhaps but more suited to a locomotive that is used on both goods and passenger trains.

The final bit of realism is supplied by the Tsunami decoder itself as it can actually brake a train. The decoder has a brake on Function 11 that will slow the train without reducing the throttle, just like the real thing. This braking effect is adjustable through a CV and needs to be set through trial and error after the above aspects are set up.

Function 11 on the NCE ProCab though is awkward to use so I re-mapped the brake to Function 7 where strangely enough there is a brake/wheel squeal noise, so now I can hit the brake and get the brakes squealing as the train pulls to a slow stop even with the throttle still on. Once the train is stopped I can release the brake and if the throttle is still open the train will slowly regain speed.

Another feature of the Tsunami is that by pressing Function 4 you can turn on dynamic braking when on a grade. The Tsunami can be set to drop the engine to either notch 1 or notch 4 while the dynamics are operating. As NSWGR diesels use notch 4 this is what I set it for.

Watch this video and listen right at the start for the engine to drop to notch 4 then the dynamics come in, you can of course combine this with actual braking, brake squeal and all.

So there you have it, not perfect yet but very driveable and great fun as well.

I love the videos and the useful information about DCC settings. The start of 44 seems a bit like a greyhound out of the gates. Is that something to do with momentum settings?

Thanks again for posting such inspiring videos.

Interesting! Definitely an improvement on the Loksound sound scheme I have in my 44... Must do something about that... ;o) Good inspiration and thought provoking as always Ray!

All great information, Ray. I'm waiting to upgrade my Easy DCC with current chips to allow all the great sound options available,and will then invest in Tsunamis for the fleet. Have another 44 coming my way as we speak. . .someday, the 48's will show up!