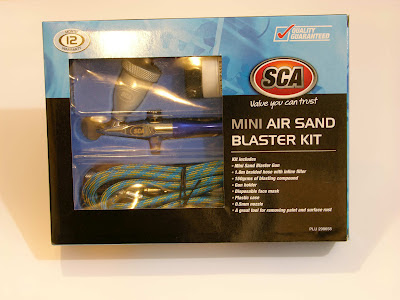 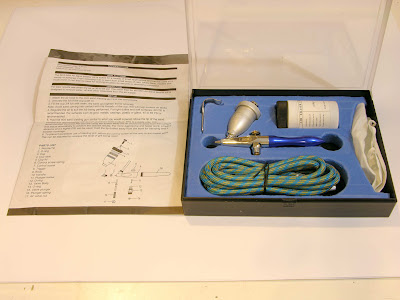 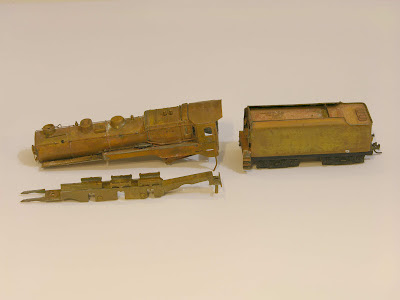 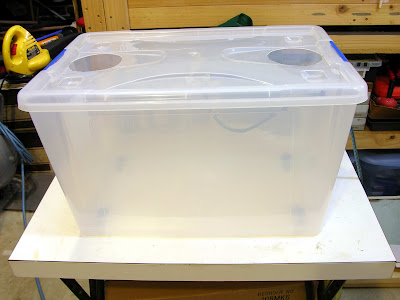 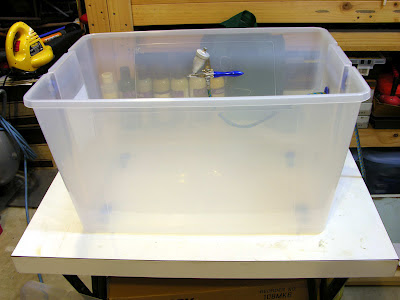 The blaster comes with a small container of the grit and I didn't see any other supply at Super Cheap Auto (I will watch for it). I would suggest that you save the used grit for re-use as I am sure that the small amount of brass, etc. wouldn't be a problem. I should mention that the nozzle has a ceramic insert.
I am interested to try this blaster on scenic elements such as ageing wood structures/parts, 'weathering' wagons and perhaps ageing signs on the side of model buildings to name a couple.
If you buy one and come up with some other uses let me know.
Posted by Ray P at 10:57 AM

I've always been interested in a sandblaster, particularly for cleaning brass and whitemetal models. I may have to make a trip to Supercheap and pickup one of these.

Can I ask where you bought the plastic storage container from? I have a couple of that exact type but cannot find which store sells them.

I thought later that I should have mentioned where I got the storage container from, it was Bunnings.

Ray Maybe you could try & fit some of the builders/brickies ankle legins around the lid area holes as that will still allow room for your hands & arms to go through & make it a lot more air tight.

Brendan you can buy those storage boxes at almost every one of the Crazy type shops or the $2.00 ones, also places like the Reject shop, & similar have them. Big W, & the other ones have thme but usually more expensive & some Bunnings store stock them.

That looks pretty good in the Video Ray, is the finish good enough to paint over or is a bit 'rough' - at the price it could be a good investment.
Brendan, like Col I've seen similar containers at the local TRS (The Reject Shop).
Cheers Alex...

There is only the finest of texturing that would supply a good 'tooth' for painting and I am very confident that it would disappear after painting. It more makes a matt surface, like matt paint I suppose.

I tried it on a transfer/decal on a building last night and provided you are very careful you can age a sign, probably easier with paint unless you were after the underlying timber or bricks showing through but then you might take the paint off the timber/bricks. Like many things, slowly, slowly.

Definitely a worthwhile tool to have.

Ray, I have owned a Badger version for about 18 months. I use baking powder to remove lettering without harming the paint underneath.

It is a bit more tempremental to use than the grit i.e. it blocks up on a humid day.

Interesting, I will have to give it a go. This is the great thing about blogs, the flow of information really helps the hobby.

That may be just the tool I am looking for as I want to remove the wood grain from the new RTR GSV's etc. Many thanks for the demo.
Andrew

This may well be the ultimate 'post construction' clean up tool for white metal and brass rolling stock ? I like Murray's baking powder idea as well.
Very versatile gadget Ray.

G'Day Ray,
Try it with baking soda for weathering
paint. Thanks for the storage container
idea I make one hell of a mess when I use mine.

I have a version of this same tool, and love it for all kinds of things--especially taking the gloss off of some plastic and resin castings. The "grit recovery box/lung saver" is a great idea. Going to have to build one of those. Thanks for the inspiration.