When Auscision announced that the silos had arrived and there were only 12 S08s left I had a quick look at the layout to see where I could place one. Now I didn't have a lot of hope but since it was such a nice model I gave it a go. Often when we are really pushed something changes in our thinking and I immediately found a location at Wollar.
Wollar has two goods storage sidings primarily for the Cassilis Branch but they are placed behind the loco depot and can be difficult to get to. The inner or front siding is not too bad but the rear siding having other wagons in front of it is problematical. Also the rear siding is longer than the front and wraps around the curved main line and then straightens up for a short distance, just long enough for the S08. The siding will need extending around the curve to the level crossing so that the empties can be pushed past the silo then 'gravitated' into loading position. I say gravitated as in real life the siding was usually sloped to allow the use of handbrakes to move the wagons into loading position and then away again, however the model siding won't be sloped.
Here is an overview of the area, the photo is not up to my usual standard but you can get the idea. The siding will be extended to the left, the level crossing being just out of the shot (see road). 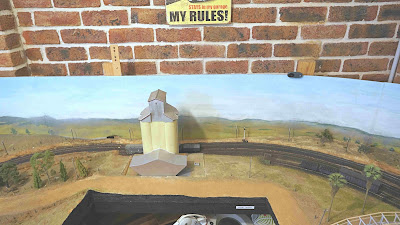 I immediately ordered a silo and it arrived about 4 days later.
The model comes with a very thick base which includes a section for the track which is 12mm thick, unfortunately it seems to have been designed for those who use use open frame and not full baseboards. For those with full baseboards (at least at stations which is I suspect more the norm) it means that you will have to cut into the baseboard to mount the silo and as the silo is  reasonably heavy being cast resin extra framing would be required. Now this isn't meant to be a criticism just a comment.
Luckily the siding I wanted to use was on a couple of thicknesses of cork and was sufficiently high to be OK if the cast track base area was cut from the silo.
Now, how to cut it off?
After much deliberation I decided that I would use a table saw which would cut from underneath the silo base, there being no room above due to the unloading pipe suspended above the track area. Maybe it could be done with a sharp handsaw but too much potential for damage.
The only problem was that I didn't own a table saw but I had been thinking about getting one anyway, so off to Bunnings and $112 later (plus a 40 tooth saw blade) and after assembly of the saw with the fine toothed blade I was ready.
I need to point out that what I had to do to cut the base can be dangerous as I had to remove the safety guard on the top of the table so that it wouldn't break the unloading pipe. I also had to check that the vertical guide behind the saw wouldn't hit the pipe, luckily it would miss by about 3mm.
I set the guide fence to what I needed to remove, placed the silo on the saw table and I stood to the side of the table out of the way of the saw blade and turned the saw on.
The resin cut well but I did take it slowly, it did make a mess though so I was glad I did it on a decking. I would appreciate it if no one mentioned this to my wife ;-)
If you attempt this then it is at you're own peril.
I have so far cut out the existing scenery and placed the silo on the layout.
Here it is in place in the scenery. 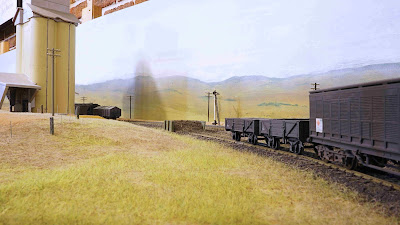 And a different view. 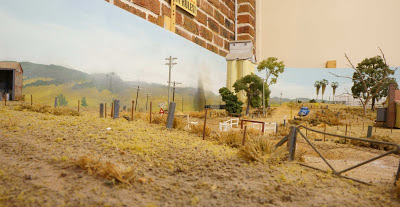 And finally without the bricks. 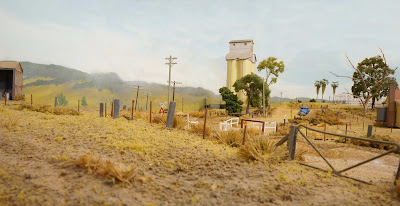 I still have to extend the siding but that will have to wait as I go into Hospital on Monday for my prostate removal and won't be able to do anything on the layout for about six weeks. I have got some building kits to make so I won't go stir crazy watching TV.
Posted by Ray P at 11:00 AM

First off my thoughts with you for the op' on Monday, I await a Nuero Surgeon for further potential back surgery, so we may be both on the lame bed for a while.

I had originally ordered one of the same silos but ended up cancelling it for a few reason, not the least being the size of the main base, & the problem I would have in fitting it into a tight area.

My thoughts were conveyed to Auscision, in regard to the need for the rail section to be part of the base, & if it could be not included, along with the base being reduced in its thickness by the corresponding amount from the rail side, it would be much more suitable.

I understand their reasoning was for the overall integrity of the model, but being molded in several sections, it could have been done, but not so.

I also consider in what you say, that most modellers would not build their layouts to a design more suitable to this type of model to be correct. I think I would actually take it a step further by saying most modellers build their layouts with a common base board height & would not take into consideration the potential to have to do a fairly large alteration to accomodate a model structure of this magnitude in the future, which affectivelly ruled me out of the silo.

The area that I would have been able to fit the silo in, was at best tight, even had I been able to cut away the resion rail side of the model.

I do admit that they look nice, & would have sat nicelly in the area I had for it, just like yours has blended in well where you have it.

Ray,
wishing you all the best for your op.
Bob

Ray,
Wishing you all the bet for Monday and a speedy recovery. Also the silo looks good.
Cheers
Chris

All the best with the Op.

By now the operation should be over, best wishes for your convalescence. I'm sure that you will make good use of the available time.