I made up a test board with two line poles to see if I could consistently achieve a prototypical sag of about six scale inches with the stretchy thread (Knitting In Elastic). I got carried away and added some soil and static grass for effect.

I applied Super Glue to the thread on one insulator, waited for it to set then allowed the thread to lay loosely across the insulator at the other pole. I then placed one handle of a pair of combination pliers into the hole through the bobbin of the thread to act as a brake, placed the bobbin and pliers on the table, slowly moved the pliers which pulled the loose thread upwards until I achieved the required sag and then applied some glue to the insulator. I hooked the thread around the next insulator applied some glue and repeated the process. It took about an hour to do the 12 wires which was about four or five times as long per pair of poles as the way a did the run of poles in my first line pole post with the taut wires. 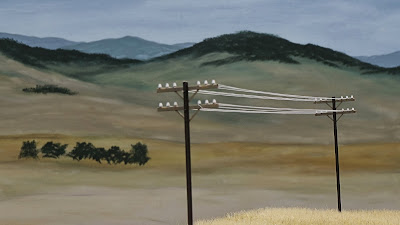 As can be seen from the photo, the outcome wasn't that good. A small amount of sag can be seen but two wires ended up higher (tighter) then intended. Also the sag ended up less than I wanted so the glue may pull slightly on the thread when it sets. If the thread is given too much sag it tends to start to wrinkle or bunch up a little.

I picked up some grey invisible thread at Lincraft as I had heard that it has some stretch, however the stretch is minimal compared with the Knitting In Elastic, perhaps 40mm over the distance between the poles. Also when allowed to sag it wrinkled up more than the Knitting In Elastic so may need to be stretched taut. This would mean that by the time the twelve or more wires were done the strain on the poles would likely be too much. The grey invisible thread could be used to represent power lines as the power poles don't carry as many wires.

Over all, I don't think that the effort of achieving a sag is worth the outcome given how many poles I would have to do on my layout if I carry on.
Posted by Ray P at 12:30 PM

Ray,
Maybe do them in the winter.
Jim.

When Andrew and I installed the EZ-Line elastic product for the fence on Bowen Creek, we found that superglue reacted with the line and crinkled it up. We ended up using PVA glue. Yes it took longer to dry, but the effect was better. Your recent tests with the local product have been very interesting, and I'll keep it all in mind when come to do my line poles. I reckon your sag test doesn't look that bad. I think if you get even a small amount of sag, it will look better than being taut. I can understand though the difficulty of getting the sag uniform across all wires.

Ray,
Once again apologies for opening this can of worms for you, but I agree with Ian that your test looks much better than the taut, even if there is a little difference in the sag between wires. May I refer you to the September MR article by Pelle Soeborg, who I think you would agree is one of the great finescale modellers currently publishing. The photos show that even his wires have a slightly uneven sag but look fantastic. He uses CA and EZ line however. Not sure if this is helpful or just complicating the discussion.