While going through that box of bits last week that resulted in the timber K wagon load, I also found a Bergs Hobbies CV wagon kit that I was given many years ago by my cousin Garry Waugh. Garry is no longer with us and may be remembered by some who have been in the hobby for many years.

I hadn't used the CV as I have several Protype CVs on BYLONG which are superb models, the masters being made by Michael McCormac, the well known modeller who has just released his NSWGR 'dogbox' kits.

Now, Wollar loco depot has a short radial track from the turntable that is very close to the edge of the layout with a 1420mm drop to the concrete floor, not a good situation. This track is to be used by the Cassilis branch railmotor so the answer was to build a shed for storage of parts and light running repairs. Down the decades the NSWGR had used old wagons stripped of their undergear and placed on supports for this and other purposes, a SRC was used at Sutherland  for the CPH railmotors and trailers that were used on the Sutherland to Helensburgh services. 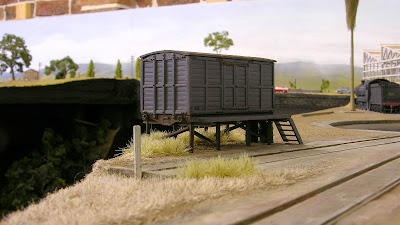 I won't go into the details of construction as they will be self evident from the photo but will say that the wagon doesn't have to be supported by rail and a retained embankment or even stacked old sleepers could do the job.

I have to find more bits and pieces to detail the shed and surrounds along with some nice black oil spillage soaking into the ground, then I really should start (and finish) the Stephen Johnson 400 Class Railmotor kit I have had since the 1980's. Now how did a 400 Class sound and what sound decoder will I need?
Posted by Ray P at 1:13 PM

I replied to Nick privately.